i get that humidity is high where you live, but is visible mold a real concern with natural storage there? since there would be decent airflow, i'm wondering if your tea is actually at risk from high humidity if it's just sitting on a shelf with no pumidor. any insight?

Was gonna ask, your natural settings seem what we try to emulate with our pumidors, we tend go lower at ~70 because mold becomes more of a risk in a closed box but just sitting in a shelf at 87% should be ok (and better)
Top

I had a few shu cakes destroyed by mold when I was starting out. And then in the dry season it can be sub 50% for a few months and even into the 30s.

So I bought a bunch of hygrometers and figured out the best place in the house, and have closed all ziploc bags during the rainy months, and added humidity using water in various ways such as storing under the bed and adding a wet rag (but the rag will stink within a day so it had to be checked regularly, and the humidity was still quite unpredictable.
Probably the worst thing I've done was leave for a month during the hot season, leaving my pu in ziploc bags in 35-40C temperature. And I have a lot of non-airtight tea caddies lined with bamboo paper, but that type of storage needs proper humidity, too. After a couple of weeks of high humidity those teas just suck, whether shu or sheng, and only some time in proper humidity restores them.

The good thing is that despite my rather sloppy storage, my teas have always recovered pretty well, although I'm not confident that they have held up as well as they could have.

So that was all a hassle and the results were uneven, despite having a few months per year when conditions were perfect.

Salt storage update - I just added 30 grams of salt to my solution and put heavy wood on top of my non airtight container to make it more airtight. I just checked it and RH is 67% and it smells wonderful. (I'd lowered room RH to 61 while the box was open, so it might still go higher. That was only a few hours ago.)

Edit: TL;DR - I've found that my pu loses aroma, flavor and qi when the humidity has been too high or too low for a couple of weeks or so.
Top

As an aside, I've also realized that I am absolutely unable to tell how humid my room is.
I'm incredibly bad at it and usually guess wrong, so having at least a couple of hygrometers is a necessity for me.

Edit: But when I can smell my tea, I know the humidity is in the 65% to the low 70s range. And when
I can smell it for a week or so at least, the tea will have good flavor and qi.
Top

gatmcm,
Someone from Hong Kong might say that the high 80s are fine for puer, but Hong Kong storage is not for everybody.
But here's something interesting - I just found half of an old bing someone gave me a couple of years ago. It was a decent daily drinker but I was already tired of it because we'd drunk it together a few times. So I was not careful about the storage. It was in it's paper wrapper, and inside a thick paper bag, and thrown into a plastic box with misc teaware. It was buried deep in the box but I was looking for something so I found it.

It suffered through at least one hot and dry season (two months of nearly 40C temperature and sub 40% RH), and then months of slightly cooler but plus 80% humidity). So it should be terrible according to what I've written above, but it's not. It's at least as good as when I got it! It never was a complex cake, but when pushed is strongly bitter in the middle steeps in a good way and has strong qi.

Why? I can only assume it's because it's pressed like an iron cake. Even after a long rinse I couldn't break it apart with tweezers and a pu pick, which I sometimes do (leaving the tea inside the pot).

Now, it did age since I got it; the soup is much darker now, so maybe another year or two would have done some damage. I don't know, but I would not subject an expensive and subtle cake that was pressed much lighter to such storage.
Top

pedant wrote: ↑
Tue Dec 19, 2017 2:59 pm
Here I describe the background (including theory of operation) of salt packs and give a design suitable for pumidor humidity control...

I just wanted to drop a thank you for your effort and time to write this up. I got into Puerh cakes last year and noted that cakes that overwintered here had become aroma-less and didn't taste like much. After researching, I found this post and created a little set-up using a small camping cooler to get things started. I made sure the cooler was well cleaned and aired out so as to minimize encouraging any mold or smells. In construction, the hardest thing for me to find ironically was the Tyvek. I ended up using a piece of a breathable synthetic fabric bag: 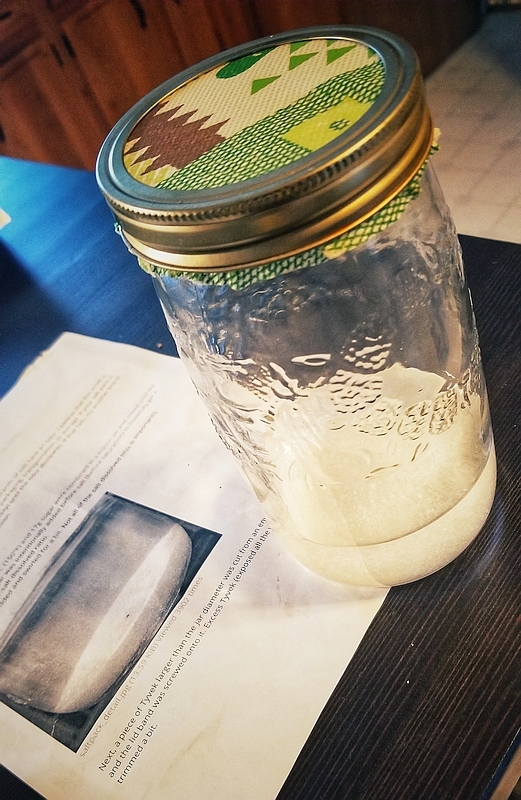 The first night I put newer cakes into the cooler and in the morning the RH was sitting at 75. I kept an eye on it and after another day it has stabilized at 70 and has stayed there now for a couple of days. The thing that surprised me was the aroma in the cooler already, it's wonderful. Smells like happy cakes - very promising.
Top

Kelly wrote: ↑
Sun Sep 29, 2019 9:29 pm
The thing that surprised me was the aroma in the cooler already, it's wonderful. Smells like happy cakes - very promising.

cool, glad it was helpful


Kelly wrote: ↑
Sun Sep 29, 2019 9:29 pm
In construction, the hardest thing for me to find ironically was the Tyvek. I ended up using a piece of a breathable synthetic fabric bag:

even if you're not in the US, i'm thinking that you can find tyvek envelopes. probably even for free.
perhaps fedex, UPS, DHL, et al. have them.

that bag material you have should work fine, but i'm thinking that it won't have as much spill/splash/leak resistance as tyvek. if you don't think you'll knock it over inside your pumidor, then it doesn't really matter.
Top

i get that humidity is high where you live, but is visible mold a real concern with natural storage there? since there would be decent airflow, i'm wondering if your tea is actually at risk from high humidity if it's just sitting on a shelf with no pumidor. any insight?

Was gonna ask, your natural settings seem what we try to emulate with our pumidors, we tend go lower at ~70 because mold becomes more of a risk in a closed box but just sitting in a shelf at 87% should be ok (and better)

Besides the more constrained space in a humidor with much relative humidity levels higher than around 70 - 72% there is the probability of mold occurring not only because the humidity is too high but also because in the western world we do not get the high temperatures of the east. The humidors I had were with 72% relative humidity patches and temperatures of either home or office levels (office levels in the past have had higher temperature levels but no longer where I am at the moment). Of course the result is that the pu'er cakes mature much slower than in with higher temperatures and humidity levels.

Not sure where in Portugal you live but they might have similar humidity levels as the UK with probably slightly higher temperatures so your tea might mature somewhat faster than mine.
Top
Post Reply
52 posts