Chip mixes things up daily, different kyusu almost every morning. This morning we had the SM anniversary tea, brewed in kobiwaku by Junzo, original first generation offered by Hojo.

Other kyusu he has used include... Gofu, Yamada Sou, Hokujo, Yoshiko, and Gusui.
There were differences, however all enjoyable. Chip was not necessarily analyzing the performance of the kyusu with our first bag of this tea. However, we just opened our 2nd bag of the SM anniversary tea, and he will pay more attention to this factor.

Tomorrow we may try Tachi's Shigaraki, this one has performed less than stellar in recent brewings. We shall see and keep you informed.
Top

Update on kyusu just used for the SM anniversary from O-Cha.

Yamada Sou direct wall works much better than the Guisi direct wall screen. Extra care was required with the Guisi to avoid the screen clogging up.
Top

Yamada Sou direct wall works much better than the Guisi direct wall screen. Extra care was required with the Guisi to avoid the screen clogging up.

Yeah, each direct wall filter is unique. They must be very tricky to get 100%, in contrast to ball/sesame filters that are attached as a unit with more wiggle room. If the filter is very close to wall along the edges, like with my Emu, the fine fuka needles don't drain liquid quickly enough, getting backed up.

@Chip your method of diagonally inclining the kyusu handle slightly downwards towards the body while pouring, worked very well for me in getting a steady flow. Also, your idea to pour warm water directly at the filter, to move fine needles out of the way, is smart. Most back-ups are averted nicely. Maybe a ‘Chip’s Tips’ thread is in the works

Just now, I mixed the last grams of two packs; O-Cha’s 20th Anniversary with his other Sea Midori, keeping temp at 160F, and the results were delicious. Wow.

P.S. I could be wrong about my Emu filter, I still haven’t tried it again with fuka since my last clog up. But, for sure it isn’t as fast as sesame filter in Gyokuryu kyusu.
Top

Been doing some ... unorthodox blending. I think the Aoi by Tsuen via O-Cha gets better with time ... it is a bit edgy, especially this early on. Seems this way most years but it remains a perennial asamushi fave of ours.

I had fuka YM, standard fuka SM, and asa Aoi open at the same time. So most days I did a different blend ... yes, fuka and asa blended ... do not report me to the shincha samurai of Chiran!

I personally enjoyed the Aoi blended w/ either of the 2 fuka. And the two fuka blended brought the best of each to the table.

Shincha can simply be enjoyable w/o being too uptight.
Top

... and it is with great pleasure we embark on bag 2 of 20th Anniversary SM.

Testing new limits on leaf to water ratio. Just a touch more leaf and it transports us to a higher love.

Like that you are mixing it up @Chip. How do you find this year’s Yutaka Midori?
Top

I am favoring O-Cha's YM at this point over standard SM. And I think it is better this year than last.
Top

I am favoring O-Cha's YM at this point over standard SM. And I think it is better this year than last.

Okay will try that before re-ordering. Thanks.
Top

We are expecting arrival of another O-Cha order today, woohoo.

After a few days of Ippodo shincha, I am ready to move on. Then this arrived today from O-Cha. 3 new choices plus 3 more bags of 20th Anniversary. 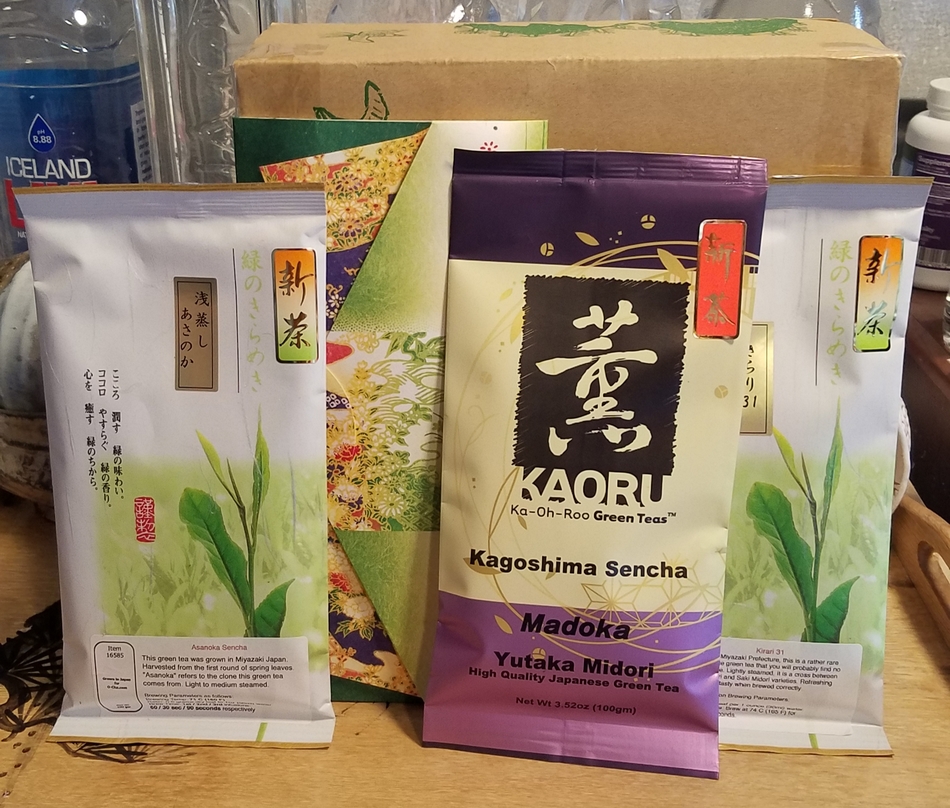 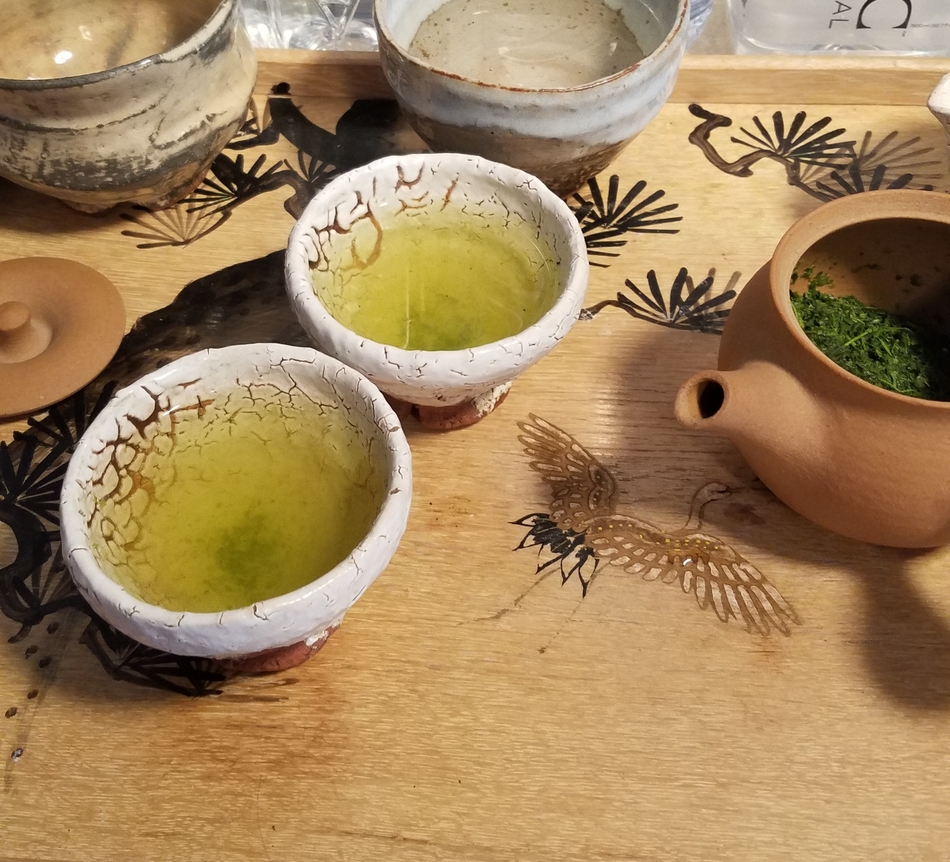 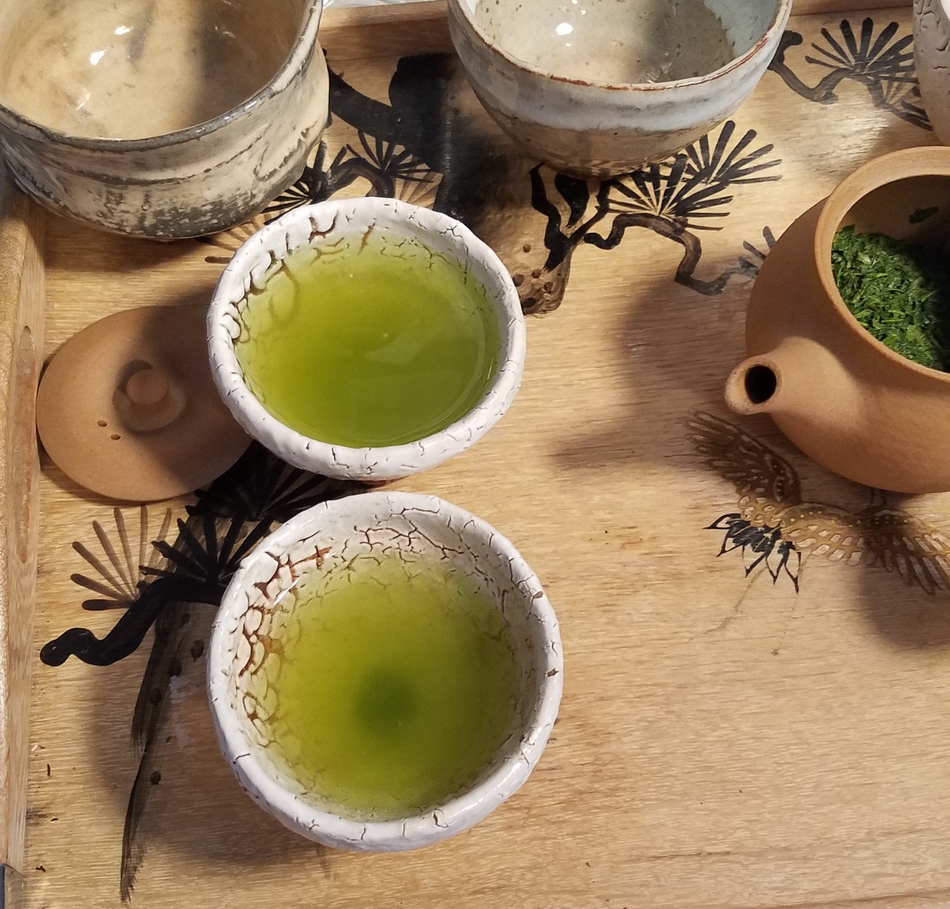 These 2 new shincha were both recommended by Kevin, but I would have selected them anyway.

Kirari 31 is a rare SM hybrid that is also an affordable alternative.

Asanoka was interesting to me last year, and this a better selection ... and also an affordable selection. 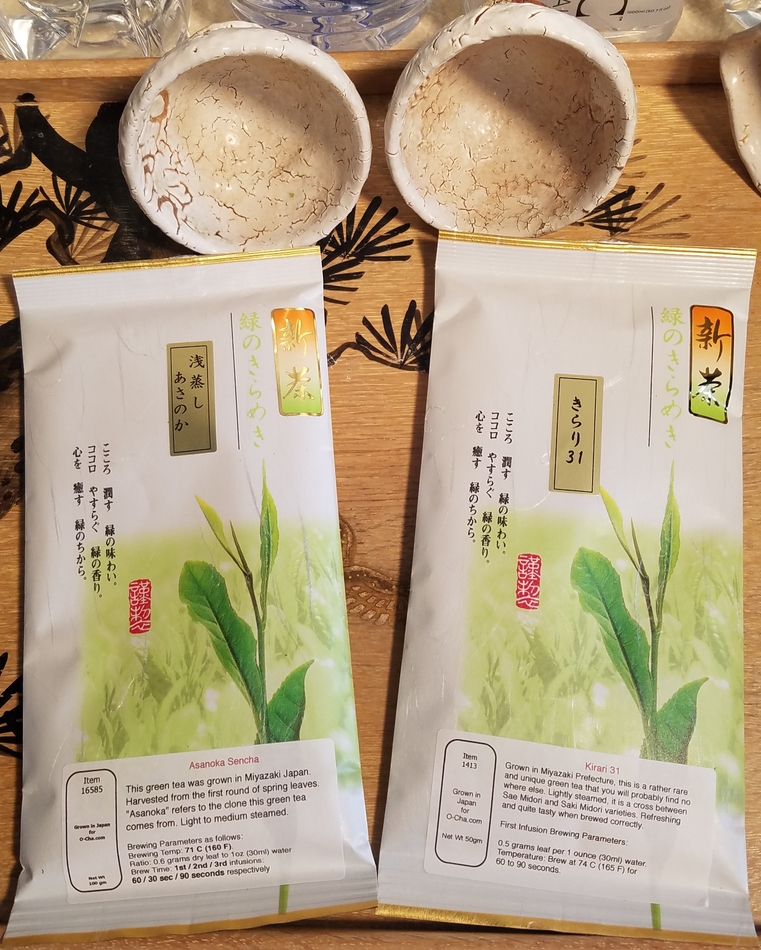 Kevin also informed me that Miyabi is very good this year.

It has been over at least 12 years since I purchased Miyabi from O-Cha, just did not wow me back then. Quite intensely grassy. Seemed one dimensional to me, but maybe I was either not ready for it yet or was not brewing it quite right.

But Kevin has convinced me to try it again, being his perennial fave.

It will have to wait for my next O-Cha order.
Top

You must really be enjoying that one, Chip!

I have a bag that I ordered but have not opened yet. I have been under the weather so I don't want to venture into it without all of my senses being at their best.
Top

You must really be enjoying that one, Chip!

I have a bag that I ordered but have not opened yet. I have been under the weather so I don't want to venture into it without all of my senses being at their best.

Hope you get well soon!

This one is just so easy to brew and enjoy. Seems I can brew it any which way and it is wayyy good ... as long as I do not brew it conservatively.

We just finished bag 2 a few days ago. 4 more on hand some of which I'll be sharing.

Once it's gone, it's gone. Kevin thinks his allotment will be gone by September.
Top

I alternate between my Gyokko 150ml kyusu with sasame filter


and my porcelain Taiwanese easy gaiwan/hohin hybrid that I've retrofitted with an infuser basket. I always steep new teas in porcelain first to taste them unfiltered. Another reason I like porcelain is because I can blend the spent leaves with another tea, usually a flavored or scented one. That's a no-no with clay pots.