A recent rebroadcast of a lovely segment about sharing an inheritance of Puerh on the Splendid Table radio show & podcast (I wrote about it soon after it was first broadcast here) reminded me of my own minor inheritance of a bit of puerh. After my father died, I found this puerh in the back of the shelf where he stored his teas, and I first posted about it on TeaChat back in 2012: It seems like it was quite a large disc, originally--the fragment that I got was probably 30% of the original size.

It brewed up in to a deep earthy liquor with a full-bodied mouthfeel and a spicy aftertaste, better than I guessed.

Responses from the TeaChat community were consistent with my suspicion that Dad acquired it on a trip to Hong Kong in the 80s or 90s; he took several business trips to various parts of Asia with stopovers for tourism in Hong Kong during those years. He also had a wide acquaintance through his calligraphy hobby of people around the world, and it could easily have been a gift from someone he sent one of his prized handmade pens. And from appearance one contributor identified it as a shu.

I enjoyed a strong camphor note in this tea, and was curious whether it would be considered a positive or a negative by serious puerh fans, and I finally took the opportunity to share it with the LA tea group during our recent gyokuro tasting. Would they like it, or loathe it?

I was so very pleased to find that they liked it!

Victoria took some notes on their comments, and will be along soon to record her impression from the tasting, as well as from a series of long infusions over the week after the tasting. 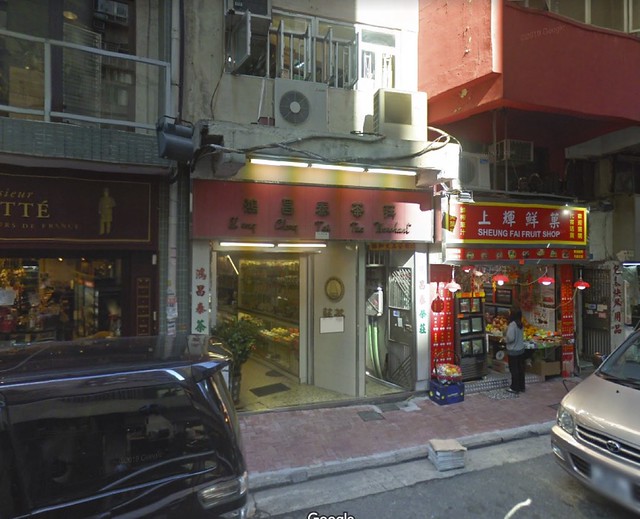 I hope I will be more mindful of this tea's journey across the ocean and through many hands and decades of time to me as I enjoy it in the future.
Top

Very nice! Thanks for sharing this story. Do you plan to follow his foot steps and go to that store?
Top

Glad to hear that you traced the tea to its origin.

When I saw the photo of the shop I recognised it as I usually pay a visit to that shop (amongst other tea shops on that street and perpendicular streets to it) every time I go to HK.
Top

If I do ever go to Hong Kong, I will definitely check out that shop, especially as it sounds like it is in a neighborhood of tea merchants.
Top

What a wonderful story. Hong Kong isn't so safe at the moment, but I'm curious to visit that street. Very generous of you to share it with others!
Top

Of course it probably wasn't new tea when it was sold!
Top

It definitely invites approaching without a lot of preconceived notions about the type or quality of Puerh, because all I have is a label and clues like the phone number.
Top

i think @Emmett has some tea with the same wrapper
Top

Pang kee bargain center in SF Chinatown sells this brand of cakes. Wrapper is pretty much unchanged. Looks like traditional storage shou. Doing a side by side with a new cake would make for an interesting comparison.
Top

Chadrinkincat wrote: ↑
Sun Nov 10, 2019 2:47 am
Pang kee bargain center in SF Chinatown sells this brand of cakes. Wrapper is pretty much unchanged. Looks like traditional storage shou. Doing a side by side with a new cake would make for an interesting comparison.

Cool! I'll check tha out next time I'm in SF. That will be a lot sooner than Hong Kong itself.
Top

Chadrinkincat wrote: ↑
Sun Nov 10, 2019 2:47 am
Pang kee bargain center in SF Chinatown sells this brand of cakes. Wrapper is pretty much unchanged. Looks like traditional storage shou. Doing a side by side with a new cake would make for an interesting comparison.

Cool! I'll check tha out next time I'm in SF. That will be a lot sooner than Hong Kong itself.

Be sure to post about it, if you compare them.
Top

Will do. I added the SF shop to my 'to do list' for the next trip to the Bay Area.
Top

I love this topic, reads like a detective story threading it’s way through Chinatown shops. Apologies for replying so late @debunix it’s been a busy last few days. I’m sure a comparison will be very interesting since the cake you have has aged so gracefully, and I’m so glad you shared it with us at our last tasting. I think in some ways it may be my favorite pu’erh of all time (so far). It had notes of menthol, camphor, was sweet but bookish, herbal and warming to body, with lots of chi. Into the next day after our tasting, it was still going strong with expansive camphor herbal medicinal notes. I continued to steep it for six days, pushing the daylong steeps using an iWarmer. Menthol, camphor, herbal notes still came through until the sixth day steeping.

I asked a few members privately if they had come across this pu’erh and knew what it was, sharing your photos with them, and that it may have been purchased sometime between 1988-1993 in HK and then stored in Livermore CA. Here are a few replies from Emmett and Phyllsheng being shared with permission;

@Emmett said that he has a cake that he found in a grocery store in Chinatown Chicago years ago, most likely around 2010 or so. That it was just wrapped in plastic with no wrapper, just the big ticket, no date but he shared images the neipao and neifei with it (see below). He said his cake is shu as far as he could tell, or had super humid storage early on, and is “quite decent tea”. 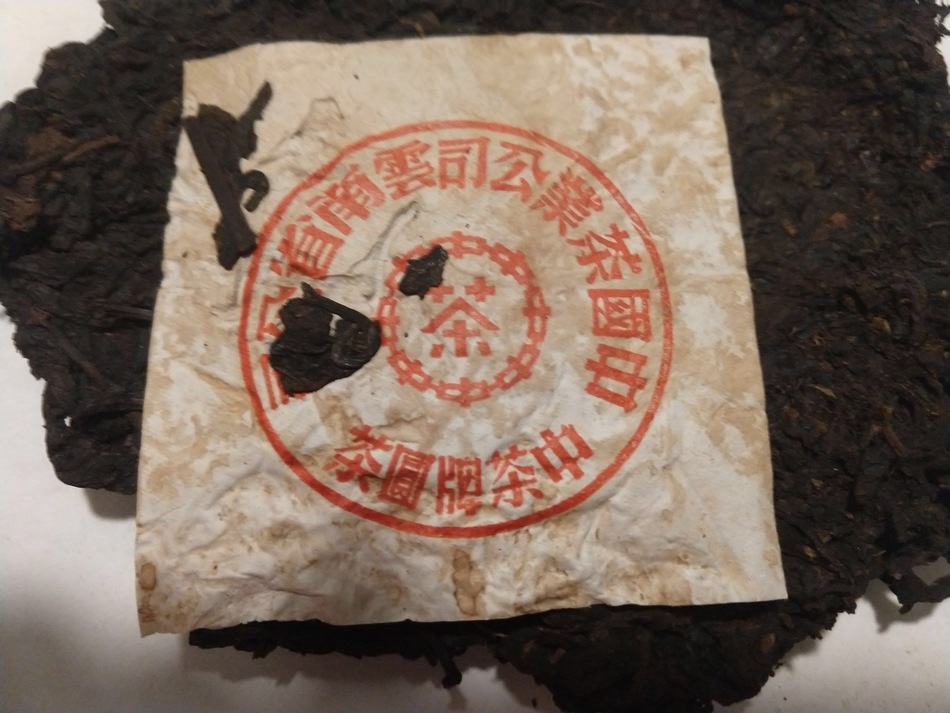 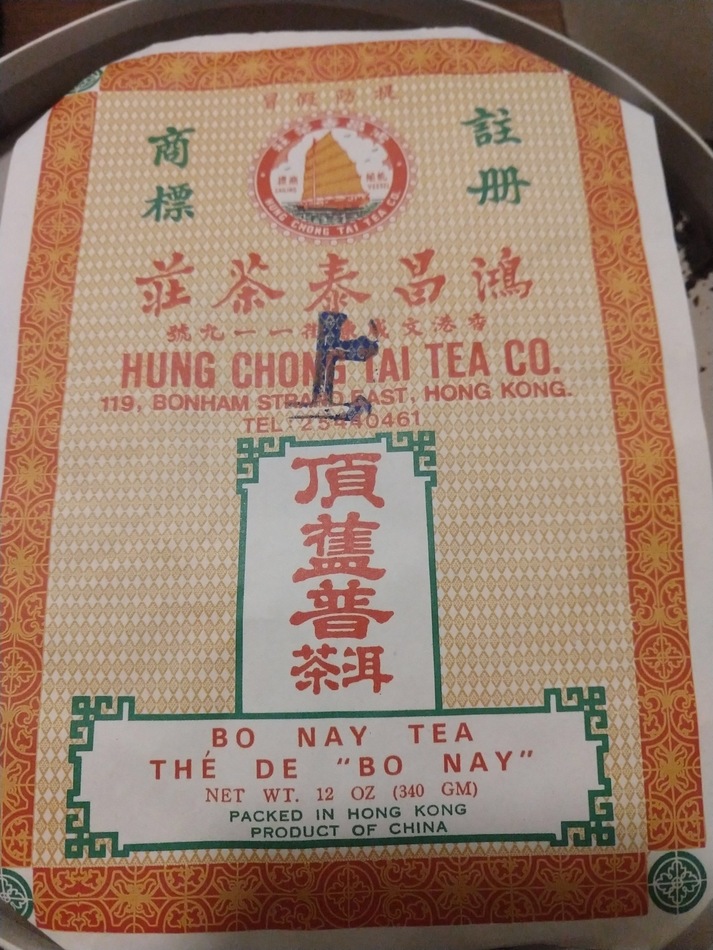 
Continuing the conversation with Phyllsheng:
@phyllsheng: Interesting. The one from Debunix looks like a sheng-shu blend (the sheng part being humid stored). Hard to see Emmett’s cake clearly... it looks like a shupu (could be due to lighting, tho).

VC: I commented ours tasted like it had humid storage early on, but then was stored for a few decades in Livermore Ca in a cabinet, so dryer conditions. It could be a combo of sheng and shu like PhyllSheng mentioned. Definitely good quality material that aged well under interesting conditions -forgotten at the back of a cabinet for so long. Yeah to procrastination and forgetting

I wondered if it’s possible that it was more common for higher quality cakes to be available in Chinatown shops in USA in late 80s early 90s? Makes sense to me since pu’erh use to be so much more affordable no?

Phyllsheng: In HK, yes definitely during that period. Pu’er was processed to be pu’er — both sheng and shu. Of course, fakes existed also back then, though not as widespread and as sophisticated as today. But not in US Chinatown, though. Well, at least not in LA. I moved to LA in 1994. Not a single pu’er anywhere in LA Chinatown & Monterey Park tea shops and supermarkets back then. Pu’er started to appear in LA Chinatowns around mid-2000’s after it became a sensation in mainland China (and a years-long price bubble).

VC: So interesting. So during and after the 1970s, when shu was popularized/commercialized, it continued to be just pu’erh but mixed together mostly? I could have been more specific re Chinese shops -to those in San Francisco since that is closer to Livermore where Debunix’s father was working. With the Chinese coming in 1850s gold rush, 1860s to build the transcontinental railroad, San Francisco has a older Chinese community than LA.

Phyllsheng: Not usually mixed together. Sheng-shu blend was and is still a small minority compared to sheng only and shu only pu’er. My observation on Debunix's being a sheng-shu blend is based largely on the wet leaves pic found in her Flickr account. The dry cake's appearance is also helpful, but far less certain. Wet leaves tell much, much more.


Pushing the steep with iWarmer 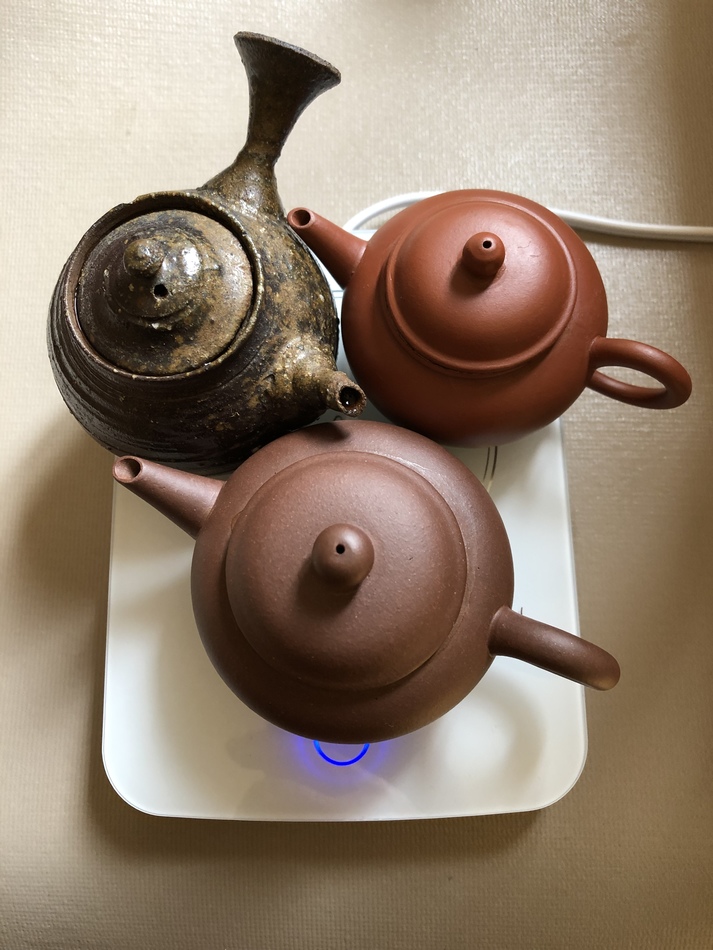 Victoria wrote: ↑
Mon Nov 11, 2019 12:55 pm
Phyllsheng: Not usually mixed together. Sheng-shu blend was and is still a small minority compared to sheng only and shu only pu’er. My observation on Debunix's being a sheng-shu blend is based largely on the wet leaves pic found in her Flickr account. The dry cake's appearance is also helpful, but far less certain. Wet leaves tell much, much more.

I'll work on a good photo of the leaves spread out when I next infuse this tea and share it.
Top
Post Reply
15 posts • Page 1 of 1