Balthazar wrote: ↑
Sat Jul 17, 2021 2:58 pm
It doesn't leve the outbox until the recipient actually opens the message. I was confused by this too

Yes, correct until message is read it remains in outbox. I still have many unread messages

Ok, that's a bit confusing... but also helpful because now I know that he has opened my message.

Despite broad forum experience, I have not succeeded in adding a location to my profile, although I see that many members managed to do so.

How do you do that?

By the way, I found it very unsympathetic that during registration I was labelled as a spammer, just because my VPN happened to be on.
Top

Welcome to TeaForum @Léon. Looking forward to seeing your introduction here. To add your location go to User Control Panel/Profile/Location on upper right of the page where your name appears. Sorry, we have strong anti-spam protocols here to avoid being inundated with junk.
Top

"To add your location go to User Control Panel/Profile/Location".

That's the problem: I was there 20 times, but I still don't see Location.
Top

That's the problem: I was there 20 times, but I still don't see Location.

Hmm, let’s see if this helps you out; 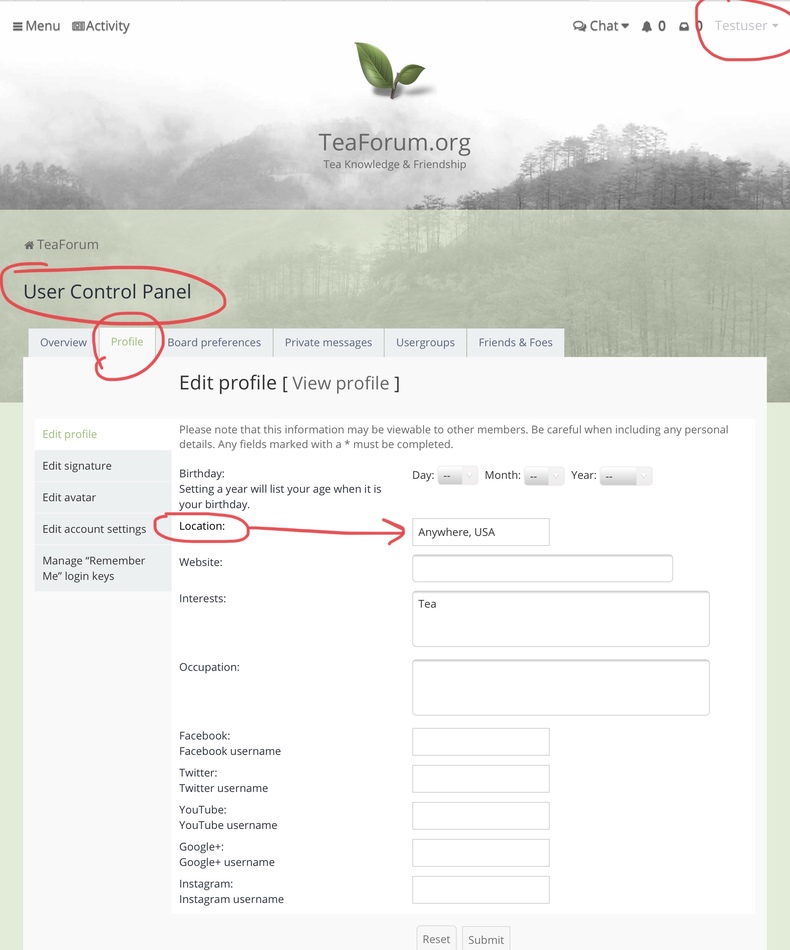 hey @Léon, welcome to the forum!


Léon wrote: ↑
Thu Sep 16, 2021 2:39 am
Despite broad forum experience, I have not succeeded in adding a location to my profile, although I see that many members managed to do so.


Léon wrote: ↑
Thu Sep 16, 2021 2:39 am
By the way, I found it very unsympathetic that during registration I was labelled as a spammer, just because my VPN happened to be on.

an anthropomorphization! machines are neither sympathetic nor unsympahtetic. try not to take it personally.

i'm sorry that you fell on the wrong side of one of life's many compromises. if i could reduce or eliminate false positives, believe me, i would. thank you for taking the trouble to persevere and register nonetheless.
Top

Edit profile (above Edit signature) is missing, I think. 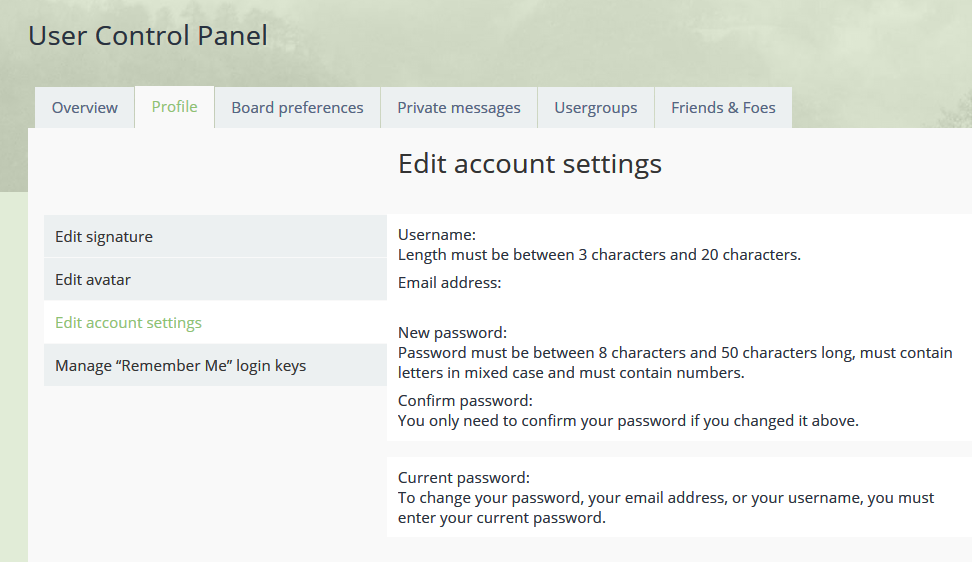 thank you for reporting this bug (misconfiguration). before now, users with less than a few posts could not access profile settings. it should be fixed. but it's also irrelevant in your case because you've already made a few posts at this point and have automatically gained access to the feature. however, you have helped new users in the future by reporting this.

maybe there should be a bug bounty program here that pays out in tea.

So it worked after all.

This seems to be a forum with instructions.

One more word about the spam accusation during registration:

After I had proved that I was not a robot (!), a very unfriendly comment came along, something like "This soup is not going to be eaten by you, because you are a spammer".

That sounds a lot funnier and less unfriendly!
Top

@Léon, i moved the discussion here since it's off topic in the introduction topic.

i agree that the message displayed to the user is stupid. i didn't compose that myself.
Top

I’m not sure if this is a new problem with updating iOS, or an old problem that I only discovered because I’ve been doing more posting from my phone. When I am uploading photos to a post from my phone, if they are portrait orientation (taller than they are wide), then they are rotated 90° and displayed landscape and this appears to be something automatic that I have no control over. I assume that I’m not the only one with his problem, and maybe others have found useful solutions in settings that I can adjust.

I am posting from an iPhone running iOS 15.
Top

do you have a way to get me an image file that does this? i'd need an original off of your device somehow though so i can reproduce the issue.

edit: i pm'd you
Top

And there you have it, right in that image posting test topic: I'm complaining about the same thing from several years & iOS versions ago. But today I am looking at an image that I shot in portrait orientation on my iPhone, that my iPhone recognizes and displays in portrait orientation, but that is showing up in Firefox on the iPhone in landscape mode when I previewed it on the phone--until I cropped it to landscape orientation.

Little more work shows that it is not a Firefox or Safari issue, but rather something to creeps in when I attempt to save everybody's bandwith by uploading a smaller size of the image. So whether I use Safari, or Firefox, if I select a smaller version of the image--not a crop, but instead of selecting the actual size, I select one of the other options, so a resizing--the problem occurs. And the same thing happens when posting from the phone to another forum. So the issue is with how photos in iOS deals with resizing images.

I will take this question to Apple now!
Top

debunix wrote: ↑
Sat Nov 27, 2021 1:43 pm
when I attempt to save everybody's bandwith by uploading a smaller size of the image

maybe this is the problem.


pedant wrote: ↑
Tue Nov 21, 2017 4:20 am
...
i've tweaked the phpBB image resizing plugin i wrote to rotate images like yours so that all browsers will display them properly.
however, if someone uploads an affected image that is sufficiently small, then my plugin won't be triggered (no need to resize an image if it's already small), and in that case it also won't get auto-rotated.

view my original post and the link therein for a general explanation of why there are often image rotation issues online.
summary: images are often stored in the incorrect orientation (actual pixel data is incorrectly rotated) and rely on metadata to tell the software displaying the image to apply a rotation. the metadata is like a note attached to an image that says, "rotate me whenever you view me." web browsers (chrome, firefox, etc.) don't apply these metadata-based rotations for you.

i wrote a forum plugin to give me some control over how uploaded images are handled.
the plugin is only triggered on images that are larger than 256 KiB. images that are smaller than that are untouched.

the assumption is that small images have probably been optimized for the web already in photoshop or whatever. due to modern image sensor densities, image files are very rarely that small coming out of a camera. if they're already small, i don't want to process them more since that just reduces quality (it's a lossy operation).

when triggered, my plugin shrinks images to save on server storage.
it also fixes images that rely on metadata for proper orientation (rotating the actual pixel data to the correct orientation).

maybe you shrunk the image on your phone small enough that the plugin didn't trigger. and maybe also your phone software doesn't truly rotate the image.

sometimes weird tricks like this work: rotate the image, save it, rotate it back, and save again. sometimes this triggers editing software to rotate the actual pixel data.

or just don't shrink it on your phone. then my plugin will rotate it for you.
Top

I prefer not to upload full-size images even if they are going to be shrunken before storage because it takes up more time and more energy from my device, the forum servers, and that which it takes to send the data through the Internet. And it shouldn't require special patches for every forum to manage such a seemingly simple thing.
Top
Post Reply
90 posts