Hello,
I have a problem with my Japanese black cast iron teapot kettle, recently I forgot it more than 1 hour on the fire of the gas stove.
it has oxidized and become rusty underneath.

I read on a web site specialized on japanese waxes that you have to soak it in a mixture of 50% water and 50% vinegar, which I did, then I scrubbed it with a plastic stiff bristle brush. the problem is that, even if the rust is partially gone (if I keep scrubbing I think the rust will be completely gone), the treated areas now appear grey. Is there any solution to make the surface look like it did initially, i.e. black and more uniform ?

This is a gift to my japanese wife, she is coming back in one week, And I would like to fix it before she's coming back

do you guys actually use it as a teapot? tea goes inside it? was actual tea inside it when it got burnt like that?

or do you just use it as a kettle to heat water for tea?

i believe tetsubin are typically coated with something on the outside (usually not on the inside) to inhibit corrosion. traditionally, i think it's a natural urushi lacquer. ordinarily, the tetsubin is only heated when filled with water, so the surface temperature does not go much above 100°C (water boils at 100°C, so excess heat is absorbed by the water and carried away by steam). by heating it dry, the temperature went way above that, and the protective lacquer burned off.

i don't think it's realistic to re-lacquer the outside yourself, although an actual tetsubin workshop could probably make it good as new.

but now that you have bare metal on the outside, it is highly susceptible to "flash rust". you need something on there to protect it. and you might even need to clean it up again first before you do that if rust is already forming.

read through this thread:

you can try to build up a tea residue coating. tea residue isn't totally black, but it does darken with time and heat. there are some lipids in tea residue, but a lot of it is water soluble, so wiping it a lot could remove it or make it look less even. also, it can burn just like the original lacquer (probably even more easily), so don't do that again.

i've never tried this personally or seen it recommended, but applying a very, very thin coat of vegetable oil first would make sense to me. as if you're seasoning cast iron or carbon steel cookware. it would be applied hot and then wiped off almost completely. a foundation of semi-polymerized oil could in theory be a good foundation for further seasoning from tea residue or whatever. not on the inside! only on the outside!

i don't think you'll ever get the outside to look perfectly even and brand new, but you can probably get it looking pretty decent. and most importantly protect it from rust.

for the inside, i'm not sure what's going on there. is there actually rust inside? or is it just organic residue that burnt at high temp and changed color? i'm guessing you have a cake of limescale and burnt organic residue. and maybe some rust.

it might make sense to strip the limescale out with vinegar (or citric acid) solution. afterwards, boil some tea in there to protect it a bit like in the post i linked to.
Top

Vinegar is an acid, it dissolves whatever oxides/rust are on the outside, leaving the raw cast iron exposed, thus the grey color. If you want to get a nice black patina, you want first to let the iron rust lightly (e.g. wet it and let slowly dry a few times, or to speed it up you can use hydrogen peroxide which is a powerful oxidizing agent, or in your case maybe just use it on the gas stove as you normally do). Once you have a nice layer of a brown rust (mainly Fe2O3 iron oxide) you can turn it to a black oxide (Fe3O4, magnetite) to get your patina. You can do this by wiping a tea or boiling in a tea (i think it is the tannins and also the heat that do the job), red onions also work nicely, then scrub lightly with a towel to clean. It is the same process that is behind gun bluing.
If you use a gas you may need to do it periodically. Or you can oil the exterior very lightly with a flax seed oil, but i'd be very careful with that, probably use it only on the bottom, you don't want your tetsubin to look like a cast iron pan.
Other option would be to go for the rusty look, but that mean rusting also the top part that is still black...
Top

I was also going to suggest onions. I pre-treat my carbon steel chef knives with onion juice to give a dark protective coating to the steel.

If you go with polymerizing an oil then I suggest using flaxseed oil. It is the gold standard for getting an even coating on cast iron.

I don’t know what to make of the inside of your water kettle.
Top

I wanted to thank you for all your advice.

I must admit that I tried several methods in a bit of a mess but finally I managed to correct the outside appearance, especially by continuing to rub with a melamine sponge to remove most of the rust, then wiping the bottom with a cloth with a little olive oil (I didn't have linseed oil). The look didn't come back perfect but enough that my wife didn't realize there was a change

Inside I boiled rice water and then tea, I feel like it's a little better but anyway before I left the teapot too long on the fire the look was white gray as if there was a lot of scale. personally I find this look better.

One thing I have noticed is that as I use more and more the teapot to heat water (this also answers the question of pedant, in general, we only use it to heat water, we do not put tea in it) the appearance tends to become more uniform.

I will test later the teapot in a big pot with tea to see if it improves again. One thing I have noticed is that as I use the teapot to heat water under normal conditions (this also answers the question of, in general, we only use it to heat water, we do not put tea in it) the appearance tends to become more uniform.

I will see if I can find also faxseed oil.

Thanks again for your help
Top

One thing I've noticed with flaxseed oil is that it tends to make a nice 'shell' coating, but it tends to flake off in thick pieces suddenly exposing the bare metal underneath rather than gradually wearing away. I'm not sure if this is a problem of how I've used it but I'm not sure I'd want that on the outside of my kettle.
Top

i admit to making a similar blunder.

one time, i totally forgot about mine on the stove for hours! it ran dry!!

but fortunately, i had it on a low/simmer setting on my induction stove. it wasn't temperature controlled, but the power output was set low enough that it never got hot enough to burn the lacquer. i couldn't believe my luck. that's one of the advantages of induction... the hottest thing in the whole system is the cookware itself. even a tiny flame might have burnt something that ran dry.

i'm using the kettle now, and i just gave the bottom surface (of the outside, of course) plus the first few cm of the sides a light wipe of canola oil even though it looks ok. edit: minor problem with oil is it smells like oil. i preferred when the outside of the kettle smelled of dry tea residue. 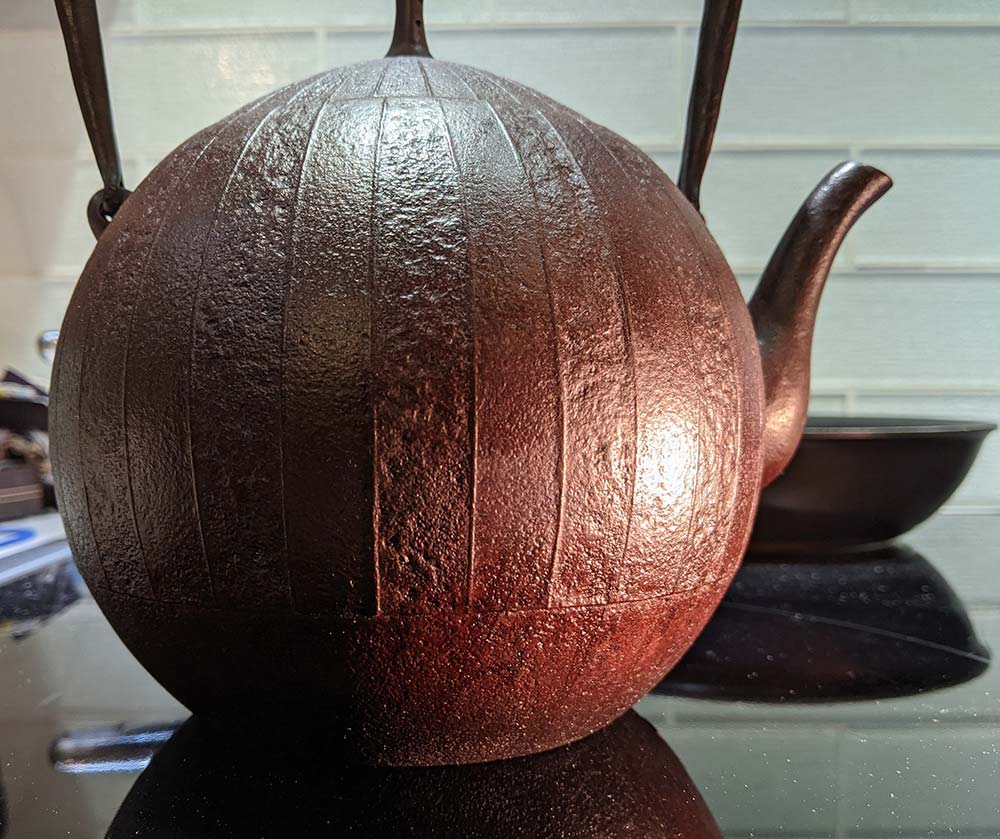 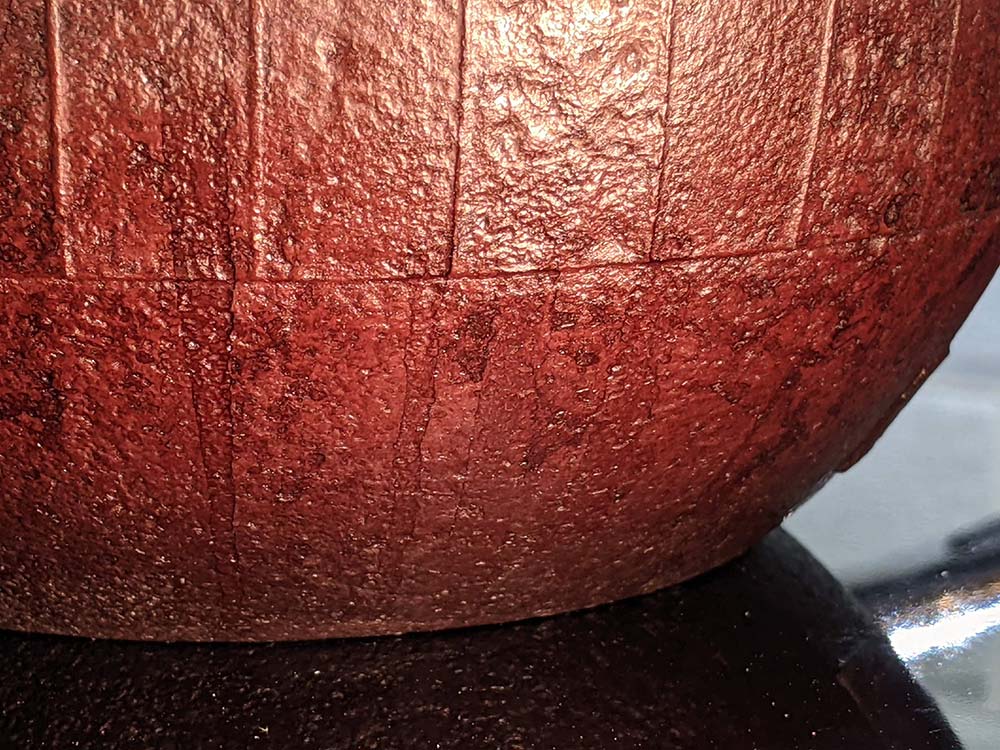 
you can see that the tea residue did darken in color though. i wiped it with tea before that happened, and i guess i got carried away. uneven drips and splotches.
Top

nice. any pics of how it turned out?
Top

the color is pretty close to how it originally was. i guess that's just how the suzuki morihisa lacquer is. the tea wiping may have darkened it slightly.
Top

nice. any pics of how it turned out? but as you can seen the aspect is a lot better

but it didn't became black as the original color, it looks like more like bronze, or something

I must add that I tried the method to immerge the teapot in a boiling tea and it worked well also to get these result !
and today I can confirm that the normal use on the gas fire improve the aspect day after day.
So again Thank you, my wife is going to manage to find something else to complain, no worry