After drinking a fair bit of the 2019 Ippodo Tokusen and Sinensis Yokkaichi offerings, my first session with a Obubu sencha in several weeks did not go so well. I was afraid these marvelous teas might have spoiled my palate a bit....and who can afford them every day? But....the next day my sencha brewing was up to snuff, and I was so relieved. I could enjoy the following Sinensis session more after I put that fear to rest.
Top

Just had a session with Tokusen gyokuro steeped the way I’ve been enjoying it 10g/80ml/140f/90sec, 70, 3min, 10min, overnight, Chrystal Gyser. I can see trying slightly cooler temp like 130f/2min steep. My session was unfortunately disturbed by a conversation about current events in USA. Tannic notes seemed to come through which is very weird, but I realize it was my body reacting to sour notes of our conversation

@faj curious when you say ‘an everyday gyokuro’, do you mean you could enjoy it every day because you like Tokusen, or that you feel it is a more pedestrian everyday gyokuro and not so special? Somehow the idea of having gyokuro everyday isn’t something I’d necessarily want, since it is so rich, intense, and really most are very special.
Top

Victoria wrote: ↑
Sat Aug 15, 2020 7:05 pm
faj curious when you say ‘an everyday gyokuro’, do you mean you could enjoy it every day because you like Tokusen, or that you feel it is a more pedestrian everyday gyokuro and not so special?

It is neither, but at the same time a bit of both. There is no doubt I like it, it is certainly among the best gyokuros I have had, if not the best, and if money were no object I would have it often. If I relate to my own experience I would describe it as having an unsurprising aromatic profile, but being of very high quality. "Unsurprising" is not meant to be derogatory here, it just means there are no aromatic notes here that I never thought a gyokuro could have. I really like the typical aromas gyokuros tend to have, and the Tokusen has well-integrated, balanced aromas that are very satisfying.

It is, however, more powerful, balanced and long-lasting than most (all?) other gyokuros I have had. In that way it certainly is far above average. It is devoid of any flaw or imbalance I can identify, which I could not say of every gyokuro I have had, even those that were far from cheap.


Victoria wrote: ↑
Sat Aug 15, 2020 7:05 pm
Somehow the idea of having gyokuro everyday isn’t something I’d necessarily want, since it is so rich, intense, and really most are very special.

I do not have gyokuro every day strictly speaking, but typically several times a week. I vary preparation method, and I think I tend to have sessions with about half the leaves and water volume you use, so I keep the "doses" small. I have not felt the urge to space out gyokuro sessions, and generally speaking I find them more satisfying than those I have with sencha. Gyokuro is typically more expensive than sencha, but I find one gram of gyokuro usually brings me a lot more drinking satisfaction than one gram of sencha due to the number and quality of infusions I get. At the end of the day, it is the "satisfaction per dollar" that matters most, not the cost per gram.
Top

This is not an overly complex gyokuro, but a balanced and enjoyable one, just like good pop music. I personally don’t like this style much, but Tokusen was made so well that I really enjoy it. This tea has comfortable and relaxed cha qi, for a gyokuro. Its taste structure and energy brighten up my morning.

What I find the most distinctive in this tea is the maker’s sourcing and blending skill. I’ve tried Ippodo’s matcha once a while ago and found that it was too “touristy” - well crafted, but lacking in substance. This gyokuro has persuaded me to try their Kuon matcha, just to experience their design and blending skill. 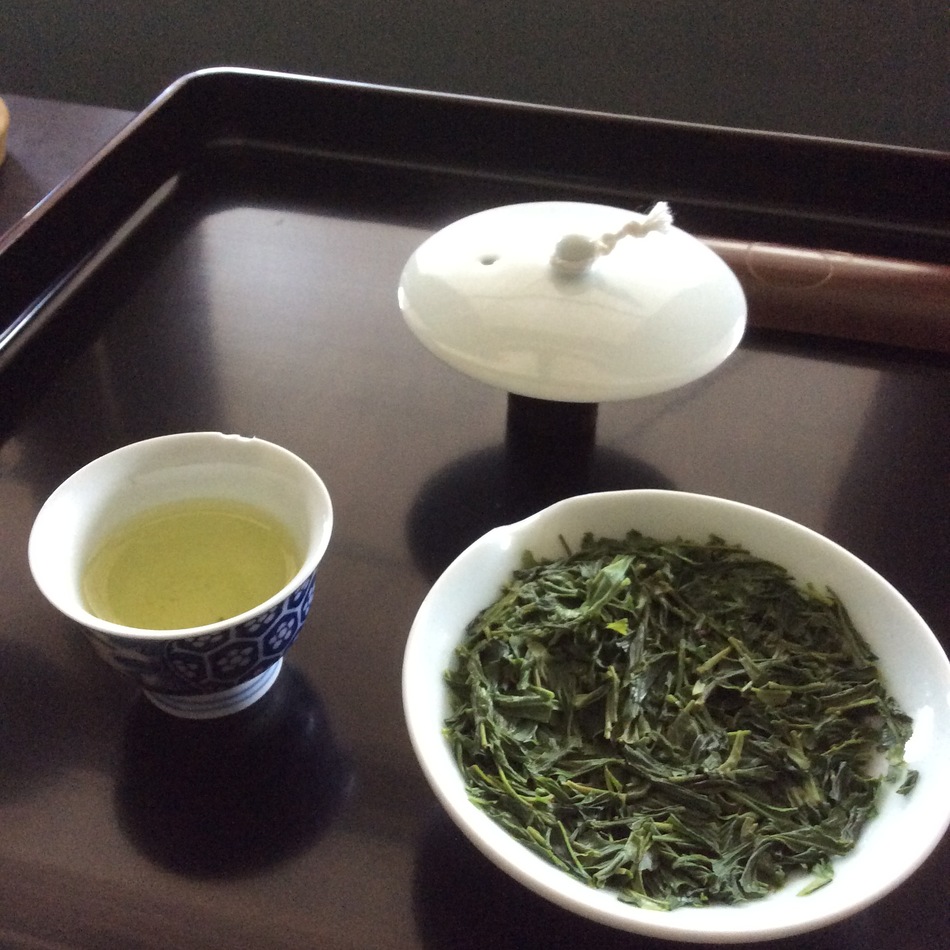 I feel @Tor's account mirrors my experience, and the parameters used were not far from those of a session I had with it, the notes of which seem to reflect a similar appreciation. That being said, my last session with that tea was quite different.

Out of curiosity, I did a true "barely covering the leaves" session. I did not measure the amount of water (I should have), but it probably was around 20ml to 4g of tea, I would say. First infusion was 55C, 90s. I got very little liquid out, maybe 10ml, maybe less. That certainly is the most concentrated gyokuro I ever had. Explosive despite having a tiny sip at a time, yet still balanced. Very persistent. Best infusion I had with this tea. The second and third steeps were very powerful and aromatic, quite different from my usual sessions. The following infusions were more in line with what I typically experience.

The very small volume of tea I got out of the leaves did not feel like a "waste" at all : on the contrary, with so little of the good stuff being "lost" by directly swallowing liquid, it kind of makes sense that this would maximize the total sensory stimulation. It was quite a revelatory experience.
Top

i just cracked another bag. 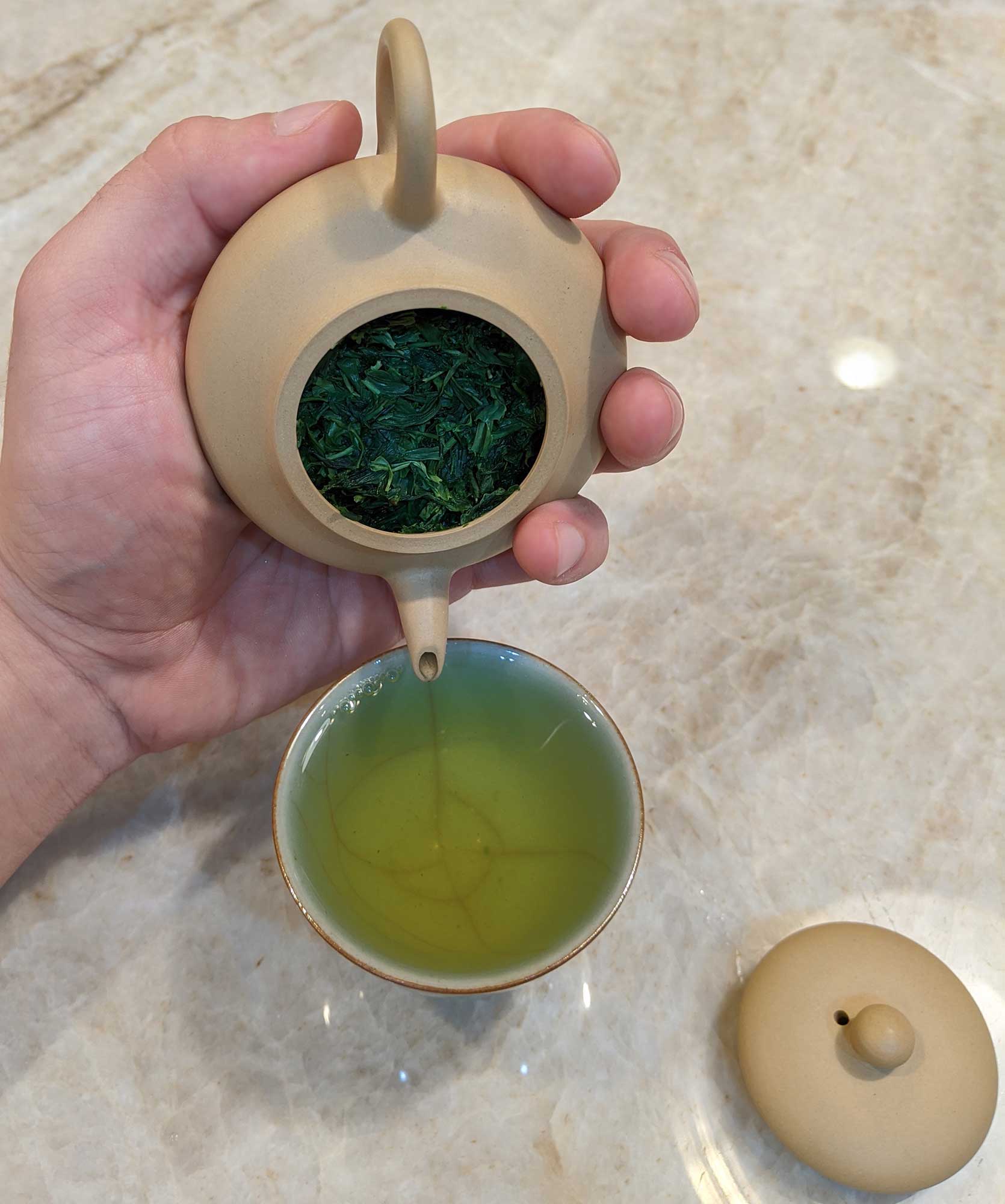 
10g in a 100mL pot. flavor explosion. sipping slowly.
the espresso of tea!

anyone still have any left?

I still have an unopened bag in the freezer. Keeping myself busy with other gyokuros in the mean time.
Top