Just wanted to create a thread to discuss the teaware of Petr Novak and Mirka Randova. Some of their work can be found at Petr's old blog http://potsandtea.blogspot.cz/. If you have any of their teaware, please post a picture and your experience of it. I am wondering how the european clay compares to something like yixing or other famous Chinese/Japanese clays.

I have three Novak pieces. They're all among my favorites. I can't say that I've noticed a difference from the clay that he uses but the aesthetics are wonderful

teaformeplease wrote: ↑
Sat Dec 29, 2018 2:35 pm
I have three Novak pieces. They're all among my favorites. I can't say that I've noticed a difference from the clay that he uses but the aesthetics are wonderful

Those are gorgeous! I love the tree bark pot. How did you get it?
Here's what I got from the most recent buy. The pot on the right is very iron rich and is wonderful with aged sheng, while the one on the left is very sandy and mutes more, so good for ripe, hongcha and wetter aged sheng. They are my favorite pots. The cups are Randova's new porcelain ones with a nice crackle. 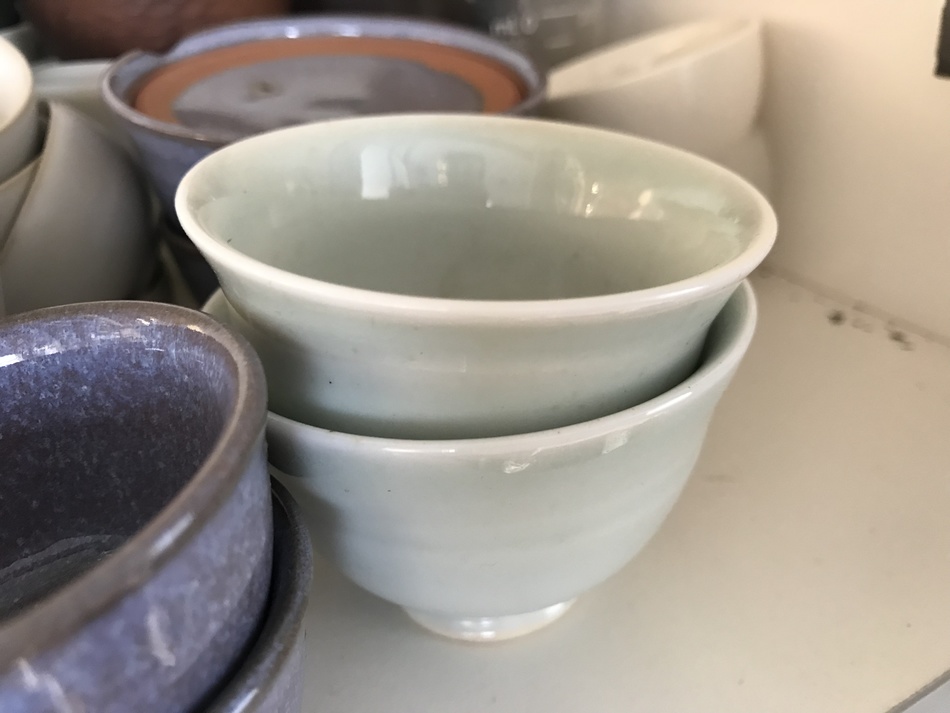 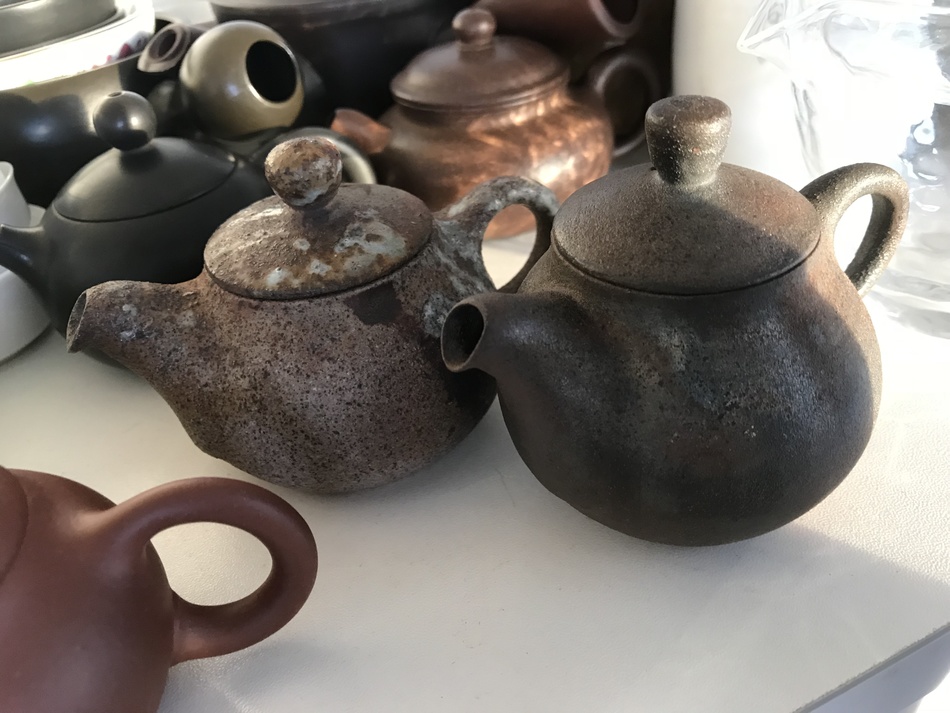 Thanks! I bought it second hand from someone on TeaChat years ago. It was a lucky find since his work has gotten a lot more popular since then. I use it for high-end yancha since it only holds about 3g of leaf.
Top

I've got a lot of Petr's teaware, starting with a kyusu, a shiboridashi, and a pair of tea cups from the TeaChat special offer. 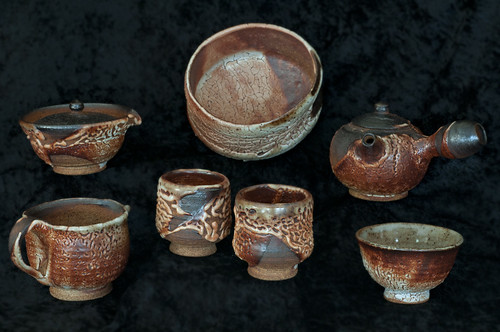 Because I helped with a mailing mixup, Petr thanked me with a gorgeous chawan. I liked them all so well--their aesthetics really speak to me, but equally important is their functionality, whether as matcha chawan, shibo, kyusu, or simpler teacup....and very occasionally, as a flower display: 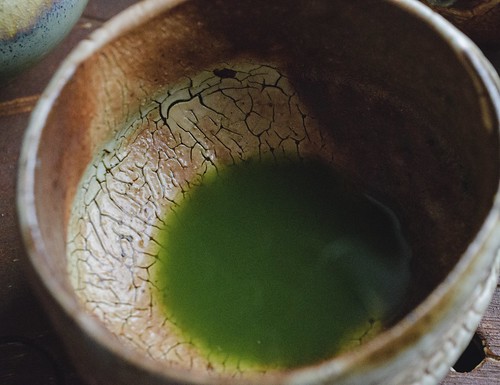 I like them so much that I've continued to pick up pieces from various retailers and directly from Petr, even buying a holiday gift for myself of a hohin and teacup at the same time as I was thinning the tea shelves with donations for the TeaForum fundraiser, because I've learned that I have to jump fast to get his pieces--so often I've found his offerings sold out before I am aware that they are up.

My everyday tea setup at home and at my primary office are on Mirka's tea trays. This kyusu is my go-to for morning sencha and many other green teas 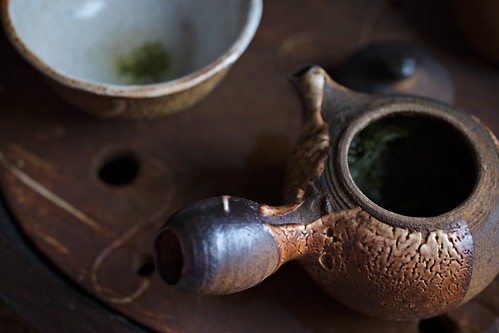 I adore this cup so much that I christened it the Flower of Forgetfulness, and I first posted this on TeaChat when I got this bowl:

"I saw this cup in Petr's available now listing, but for many days there was only the one photo, with no additional information. I did follow several of the 'Rules for Buying Teapots' including particularly 'Don't buy now'--I waited days, maybe even weeks, before I fired off an e-mail to ask Petr about it; and 'Only buy things you love..... Only buy something that absolutely looks amazing.'

It reminds me of the 'Flower of Forgetfulness' from the Heinlein story, 'We also walk dogs'--described as a Ming bowl of great beauty and subtlety, that one could lose oneself in contemplating, so much so that it drove a considerable part of the plot of the story.

I love how it has aged as the crackles have developed 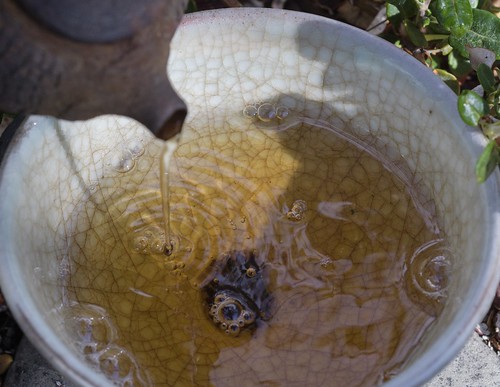 I've also shared a few pieces with tea-friends at the office. Counting those at the office from memory, and those at home which fill their own teaware shelf, I've now got about 2 dozen pieces altogether, shino and black magda and nuka and snowflake and treebark and ash-only unglazed pieces; chawans, cups, shinos, back and side handled kyusu, yuzamashi, tea trays; and several different clays.

And I just picked up my holiday present from me to my yesterday: a hohin and a cup via Klasek Tea. The hohin is lovely and functional, and will go to work as a perfect size for tea for one through a quiet evening. The cup is even lovelier in person than it was in the photos, and I think it's going to rival the flower of forgetfulness in my affections, but being a bit smaller, it will not really 'compete' with that larger bowl for use. Petr describes this as a 'bluish-white glaze' but it needs a better name, particularly with the unglazed accents: 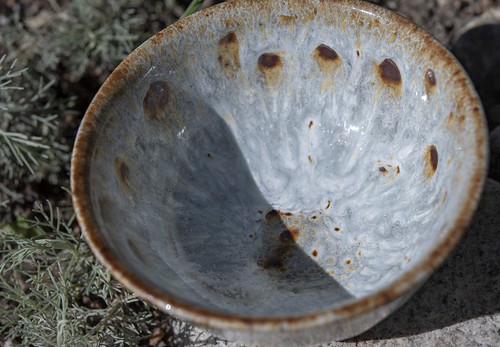 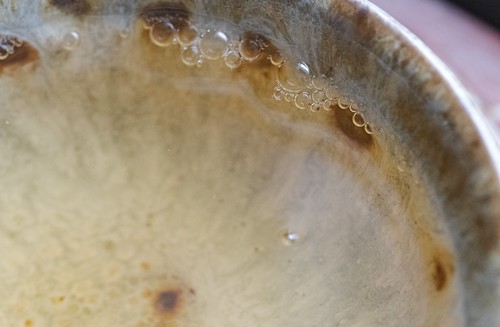 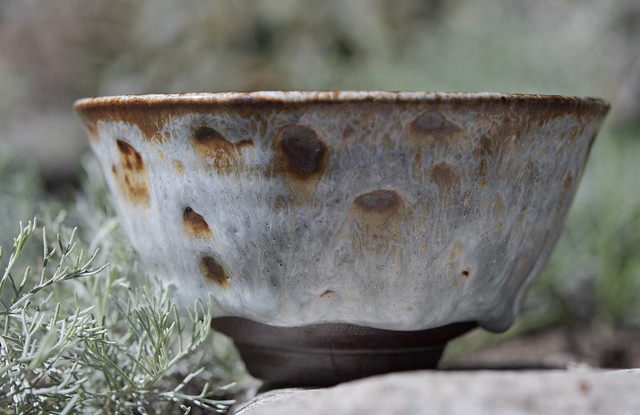 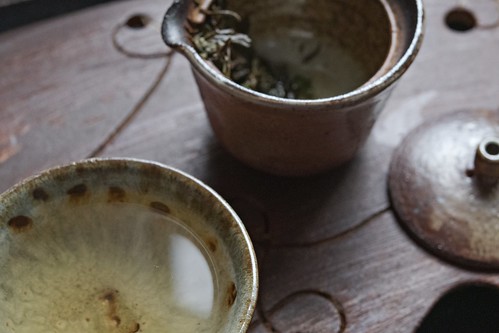 And in answer to the question about clays.....he uses an iron-rich clay that works well with sencha, gyokuro, and other greens. I have a pair of his 'tree bark' pots that and one unglazed pot of similar light gray interior color that I like with deep roast oolongs and puerhs. I use glazed-interior pieces for basically any tea, including occasional flavored/herbal/spiced teas, because I don't worry about flavor carrying over to the next tea in those.
Top

A beautiful post for beautiful teawares, debunix!
The "holes" and the glaze of the last one reminded me of karst rivers, diving underground and running unseen for kilometres before reemerging again unexpectedly.
Top

Amazing teaware debunix, and amazing photography too! I never thought to make japanese greens in a Novak pot.
Top

A beautiful post for beautiful teawares, debunix!
The "holes" and the glaze of the last one reminded me of karst rivers, diving underground and running unseen for kilometres before reemerging again unexpectedly.

What a great point....even the colors are right. It's like flowstone in a cave in karst country. I think that should be it's name--'Flowstone'.
Top

More of why I love Petr Novak's stuff....

treebark pots that look like they were grown rather than made....

and they're quite colorful

I use this little pot for traditionally roasted oolongs, and it has a wonderful property of somehow making the sweet and fruity elements of any tea stand out when a little bit of the liquor drips on the exterior of the pot. A deliberate drip or two plus a sniff is always part of the session with this one or it's twin, that is used for puerhs. 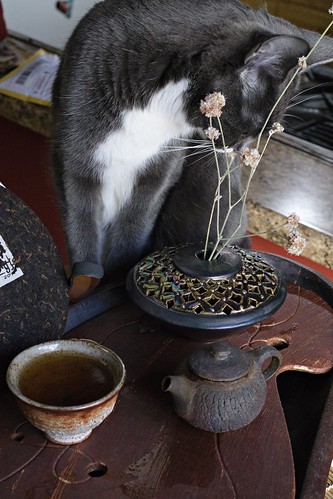 treebark pots that look like they were grown rather than made....

and they're quite colorful

I use this little pot for traditionally roasted oolongs, and it has a wonderful property of somehow making the sweet and fruity elements of any tea stand out when a little bit of the liquor drips on the exterior of the pot. A deliberate drip or two plus a sniff is always part of the session with this one or it's twin, that is used for puerhs.

Beautiful photos and descriptions. debunix. Was just perusing our Petr Novak tree bark kyusu and found your posts. The treebark are my fave of his, remind me of Hobbits.

Maybe Chip.and I can use 1 in the 12 Days of Kyusu topic. Or, at least post a few pictures here.

It's been a while since I featured some of Petr's teaware.

These are a pair of black magda glaze pots, and both are glazed inside. I keep them at the office because the glazed interior allows me to brew anything in them, including flavored gift teas that I would not infuse in an unglazed pot. I love the subtle color and play of light on the big kyusu, 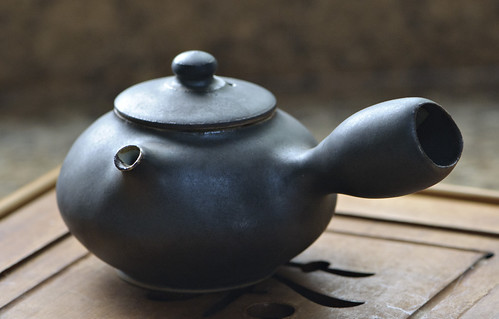 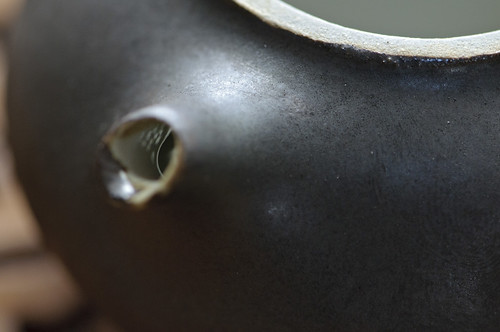 and I bought this little one (capacity about 60 or 70 mL) both because it was really cute, and use it for small volume gongfu when I'm brewing for one: 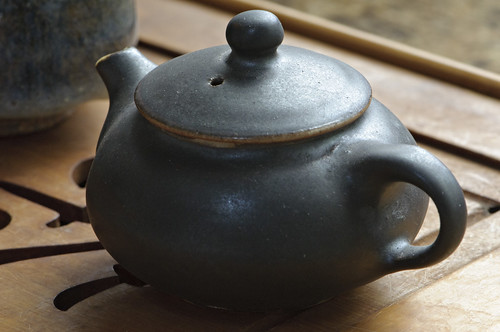 and this little blue Nuka cup is just the right volume to share those sessions. 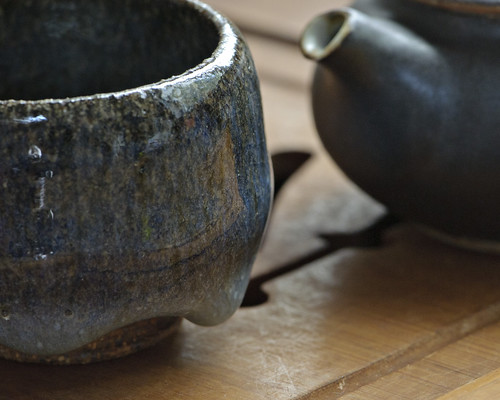 A little bark teapot I was lucky enough to grab from one of the offerings on their site, which normally seem to be blink and you miss it 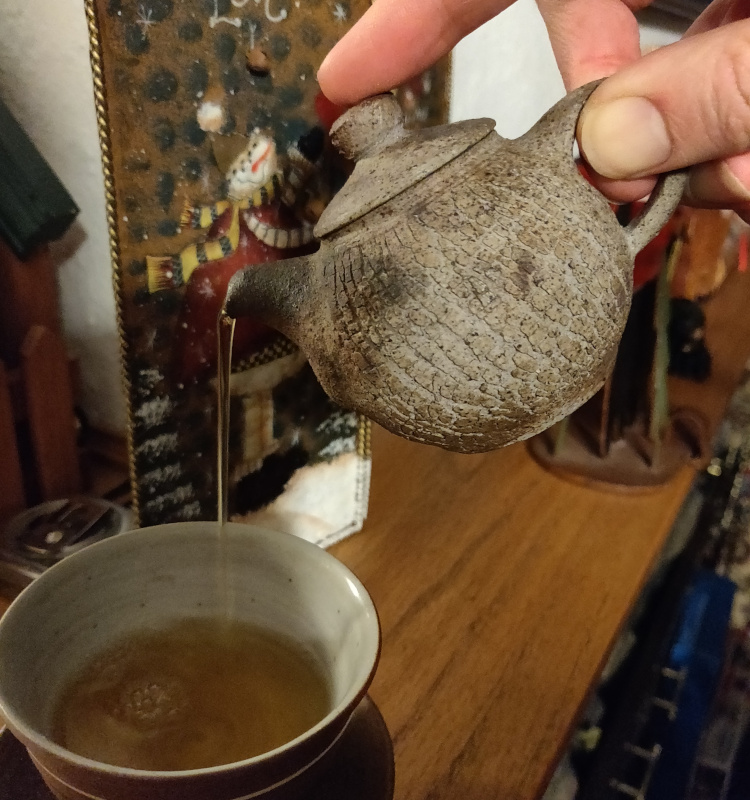 Nice bit of colour variation and it holds about 100ml which is around as small as I go. Glazed inside so it's a workhorse and gets everything but sencha.
Top 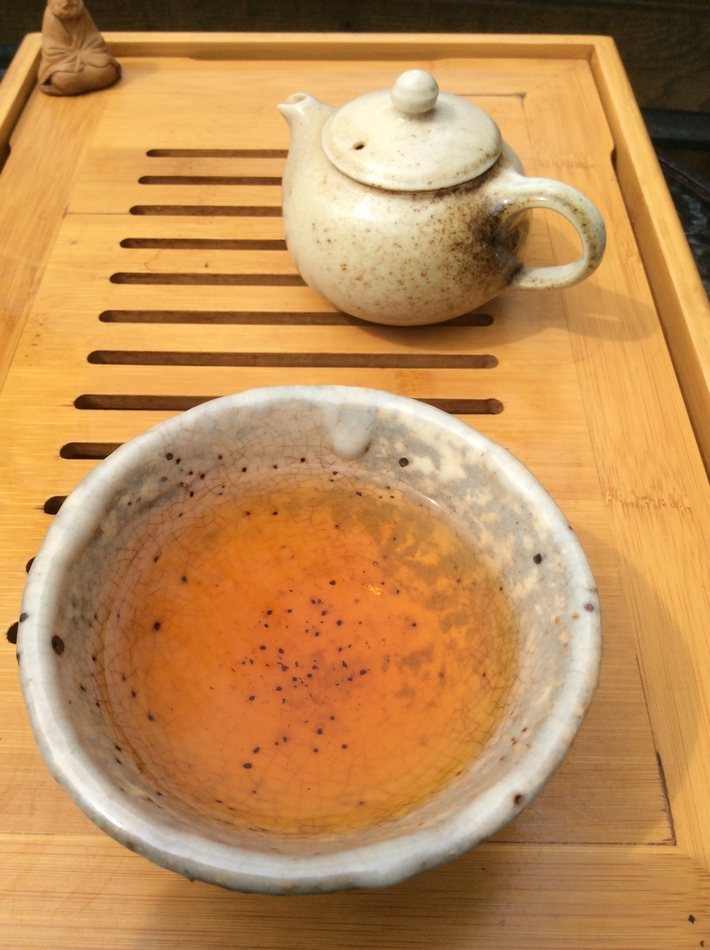 great glazed pot iGo, is it glazed on the inside too?
Top
Post Reply
74 posts