Study about the difference of chemical composition in tea brewed with different pots.

Study about L-theanine (umami flavor in green tea and bioactive compound of questionable clinical utility) declining in green tea leaves during hot temperatures. They actually set up this aspect of the paper quite nicely. Although it was been proven elsewhere, this paper puts previous findings to use in a very succinct way.

This graph shows theanine concentration of leaves as a function of time during exposure to hot temperature (defined as >35C) in the leaves of a cultivar of long jing. 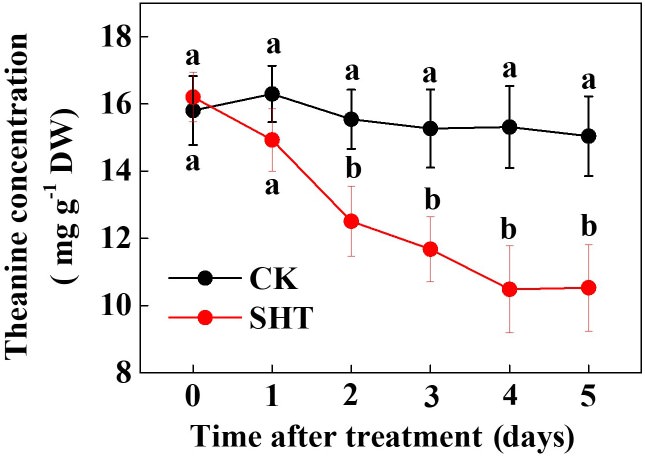 The point of this paper is to find a compound that inhibits that temperature-related decline in theanine concentrations. They found a plant-steroid -- 24-epibrassinolide -- which acts as a stress-hormone for plants, and showed that pre-treatment with this steroid could mostly reverse the decline in theanine concentration. They tried to show that it was due to change in transcription of some of the upstream genes in the stress pathway that lead to theanine synthesis, but I don't put too much stock in these aspects of any study without a more robust mechanistic description. It's like painting flames on the side of your car and claiming that makes it faster -- adding these to the study does not make this a better study. 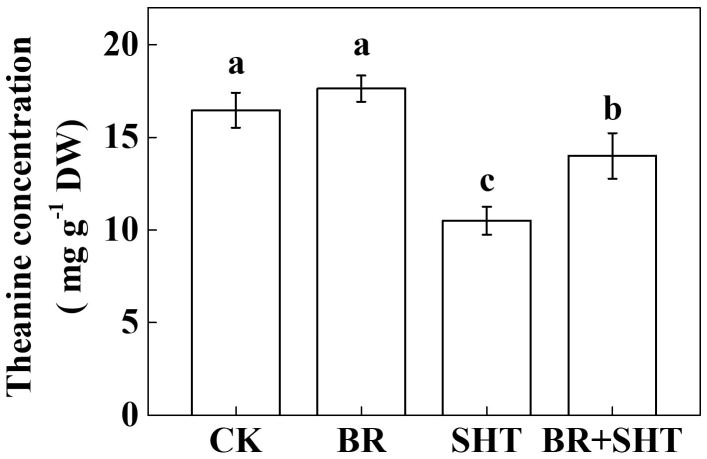 
Hongyacha (HYC) is a type of new wild tea plant discovered in Fujian Province, China. This tea is helpful to the healing or prevention of disease in its original growing area. However, research on this tea is limited. Our results showed that HYC displayed obvious differences in its morphological characteristics compared with Cocoa tea (Camellia ptilophylla Chang), a famous caffeine-free tea plant in China. Theobromine and trans-catechins, but not caffeine and cis-catechins, were the dominant purine alkaloids and catechins detected in HYC. HYC might contain abundant gallocatechin-(4 → 8)-gallocatechin gallate, 1,3,4,6-tetra-O-galloyl-β-d-glucopyranose, and (−)-gallocatechin-3,5-di-O-gallate, which were not detected in regular tea. We also found that the TCS1 of HYC was distinct, and the responding recombinant protein exhibited only theobromine synthase activity. The obtained results showed that HYC is a new kind of caffeine-free tea plant and may be used for scientific protection and efficient utilization in the future. 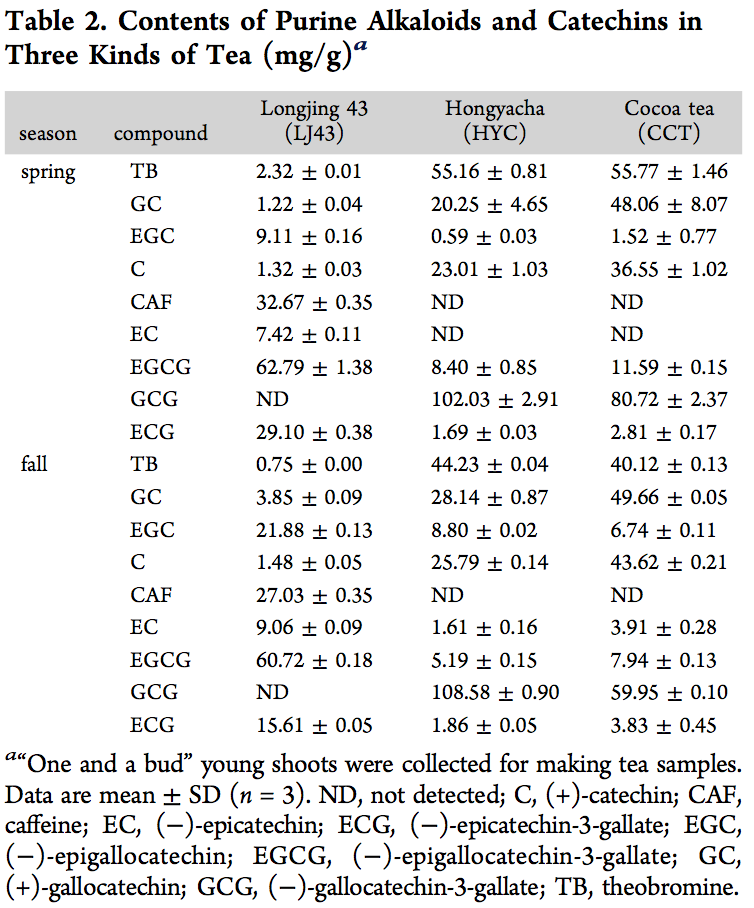 i wonder how it tastes? would be great for evening drinking or tea lovers who have become sensitive to caffeine. 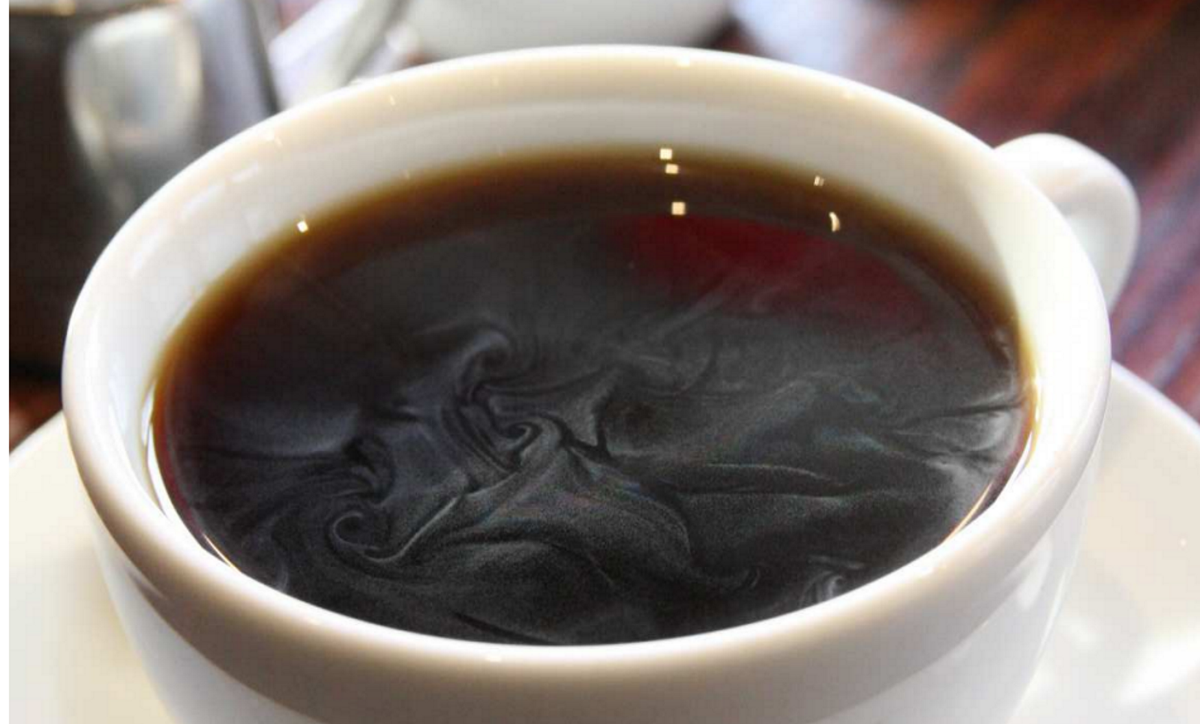 
When drinking a cup of coffee under the morning sunshine, you may notice white membranes of steam floating on the surface of the hot water. They stay notably close to the surface and appear to almost stick to it. Although the membranes whiffle because of the air flow of rising steam, peculiarly fast splitting events occasionally occur. They resemble cracking to open slits approximately 1 mm wide in the membranes, and leave curious patterns. We studied this phenomenon using a microscope with a high-speed video camera and found intriguing details: i) the white membranes consist of fairly monodispersed small droplets of the order of 10 μm; ii) they levitate above the water surface by 10 ~ 100 μm; iii) the splitting events are a collective disappearance of the droplets, which propagates as a wave front of the surface wave with a speed of 1 ~ 2 m/s; and iv) these events are triggered by a surface disturbance, which results from the disappearance of a single droplet.

worth a look for sure. nice pictures and interesting discussion.

by pedant
posted by @Mitten5 on communiTEA discord


Aflatoxins, one of the most carcinogenic substances, have been implicated as a potential threat to the safety of tea beverages. In this study, we studied the inhibitory effects of the aqueous extracts from several Chinese traditional teas, such as green tea, black tea, flower tea, raw Puer tea (naturally fermented Puer tea) and Puer tea (inoculated Puer tea), on the growth and aflatoxin production of Aspergillus flavus. All the tested extracts inhibited the production of aflatoxin B1, whereas they did not inhibit mycelial growth of A. flavus. Considering the highest inhibitory effect of Puer tea extract on aflatoxin production, a semi-quantitative RT-PCR was designed to detect its impacts on the expression of genes responsible for the regulation of aflatoxin synthesis. The results showed that the transcriptions of both aflS and aflR were down-regulated to undetectable levels by the addition of Puer tea extract. This study indicated that most tea contained molecules inhibitory to aflatoxin production, which were very important factors for the risk assessment of tea exposed to aflatoxin. Some tea extracts could be developed as antiaflatoxin agents in food preservation.

Recently, safety concerns of the popular Puer tea have arisen because of aflatoxin contamination. In this study, we analysed the inhibitory effect of 30 tea aqueous extracts on the growth and aflatoxin production of Aspergillus flavus. Our results indicated that most tea inhibited aflatoxin production by down-regulating the transcription of aflR and aflS. The findings could contribute to the safety assessment of tea exposed to aflatoxin and provide some useful data concerning a new approach for controlling aflatoxin contamination.

puerh is known to have alfatoxin contamination, and that article is about tea extract.
i'm not sure what can be directly said about that alfatoxin production downregulation effect in actual puerhcha.

by Victoria
For those wanting to know more about the local adaptation evolution of Taiwan’s wild Camellia Sinensis plant, Camellia formosensis;
“The results of the present study demonstrated that Taiwanese wild tea is considerably different from both C. sinensis var. sinensis and C. sinensis var. assamica.”... “In summary, the results of the present study strongly suggest that ‘Taiwanese wild tea’ (C. formosensis) is distinct from other tea producing taxa, hence, it should be treated as a separate species.”


P.S. Sun Moon Lake Ruby 18 lead me to read this research, you might enjoy sipping on it too while investigating.

by Bok
@Victoria Thanks! Interesting. I wonder what it would taste like as a highly oxidised, medium roast.

Most of what is sold as Wild(often just not tended to) Tea in Taiwan (real or not) is either processed as fully oxidised Hongcha or Baozhong-like almost green.
I found the Hongcha versions more interesting, yet very similar to Oriental beauty or Darjeeling. The greener versions I had, were mostly boring to my taste buds... but then I do not like Baozhong either.

Bok wrote: ↑
Tue Jun 25, 2019 12:20 am
Most of what is sold as Wild(often just not tended to) Tea in Taiwan (real or not) is either processed as fully oxidised Hongcha or Baozhong-like almost green.

The most interesting Taiwanese wild tea I have had (and it was truly wild, not feral) was processed like pu'er. It was remarkably reminiscent of sheng pu'er.

Most of what is sold as Wild(often just not tended to) Tea in Taiwan (real or not) is either processed as fully oxidised Hongcha or Baozhong-like almost green.
I found the Hongcha versions more interesting, yet very similar to Oriental beauty or Darjeeling. The greener versions I had, were mostly boring to my taste buds... but then I do not like Baozhong either.

A while back Mountain Stream Teas shared information about wild trees he had found in Taiwan around Nantou, in the southeast and southwest of the island as well. I mentioned that I thought Origin Tea’s, 'Hualien Mixiang Red Tea' was most likely sourced from a wild variety because of its minerality and longevity. I had forgotten about this thread, but your comments about Honcha reminded me to revisit it. I see he has some wild teas available on his site, although seems to be limited atm.

Since you asked, today I am having a light roasted, partially oxidized, wild Lishan from HY Chen, Charcoal Roasted LiShan Primitive Wild Forest. The difference between this one and his other, that is not charcoal roasted and greener, is subtle. I pm’d him just now to get info on the tea trees he is sourcing from and will report back.

Tillerman wrote: ↑
Tue Jun 25, 2019 8:23 am
The most interesting Taiwanese wild tea I have had (and it was truly wild, not feral) was processed like pu'er. It was remarkably reminiscent of sheng pu'er.

This above thread I referenced Puerh-seque teas from Taiwan also discusses sheng sourced from wild trees in southwestern Taiwan offered by Mountain Stream Teas. I haven’t tried it yet though I’m tempted.

by pedant
lately, i have been enjoying a sencha from TdJ made from Sofu (蒼風) cultivar. it has a distinctive jasmine aroma, and so i started reading about it.

it turns out that its distinctive aroma is due to methyl anthranilate.

The presence of methyl anthranilate in black tea made in Kenya, Darjeeling, Ceylon, and Assam was reported by Cazenave and Horman2. We developed ‘Sofu’ by selecting from the F1 progeny of crosses between ‘Yabukita’ (var. sinensis) as the seed parent and ‘Shizu-Inzatsu 131’ (var. assamica × var. sinensis) as the pollen parent. Green tea of ‘Shizu-Inzatsu 131’ was ana- lyzed by GC in the same way as the other teas. A similar level of methyl anthranilate was detected as in ‘Sofu’ (Table 1). ‘Shizu-Inzatsu 131’ was selected from a natu- ral cross population of the clonal strain ‘Manipur No. 5’ introduced from Manipur, Assam.

Extracts of green (non-fermented) and oolong (semi-fermented) teas prepared from ‘Shizu-Inzatsu 131’ were compared by means of GC (Table 1). The amounts of almost all the volatile components, including alcoholic aroma constituents hydrolyzed by enzyme10, increased as a result of semi-fermentation. However, the amount of methyl anthranilate did not increase as much. This sug- gests that methyl anthranilate exists naturally in the shoots of ‘Sofu’ and ‘Shizu-Inzatsu 131’ and does not increase after harvest due to enzyme activities. This is a cultivar-specific volatile compound.

by pantry
Been trying to learn more about Zisha recently and came upon this article. Not sure how useful it is to a tea drinker, but hope it interests some folks here nonetheless