Production and logistics issues are a given. Yet a sort of contamination boycott will make things more likely worse than better for the population.

I don’t seem to remember there was any contamination of products during the SARS outbreak, was there? And that one had a much higher fatality rate.
Top

Viruses like this one are not stable. If coronaviruses were non-enveloped viruses (lacking a plasma membrane), then I'd be much more worried! Those are *much* more stable outside of a host.

It would be nigh impossible for a coronavirus that uses a human entry receptor to infect a plant cell.

If tea is the topic, get more concerned about disruption of supply chains, labor, and shipping. "Contaminated products" isn't a concern based in science in this case

You aren’t missing anything. It is mostly just fearful westerners worrying about something completely unrelated to tea merely based on the fact that puerh and corona virus are of Chinese origin.
Top

From what I know , this virus can not live longer than 3 days without the host ( it's not a cell in the tea leaf ) , and that's if in optimal conditions for the virus, otherwise 1 day . So if it gets on surface of the tea leaf or on packaging and goes to airplane cargo section (low temp) , sit somewhere in customs for a week,I don't see the way somebody can get infected. It takes 2-4 weeks to deliver the parcel in general to US or other countries like in EU.
I've seen some news from Russia where somebody was trying to claim being infected coz purchased headphones form Ali-express. They had to make an interview with specialist on viruses to explain that's non sense.
I believe some people will be hesitant to order anything from China, which plays "+" for local businesses now.
Maybe some tea export will grow from India ( till it spreads there as well ) , but those 50-100g orders not going to make rich anybody;-)

What we hope here is, that chaos and followed economy drop down will cause lowering prices of new mao cha from the farmers / producers ( actually it might influence prices on tea market as well ) . Problem is , that all out city traffic is being cut off / restricted ( public transportation for now ) , so no way to go down and pick up / buy some tea. Also some villages do not let outsiders ( not only foreigners ) to go in to their village. We have even protected our house estate from people who don't live here. Only residents now can access , no visitors.
That will have an impact on tea farmers for sure. Last year was bad coz bad / dry season, this year is going to be worse.

, others will keep getting their good tea for competitive prices.
Top 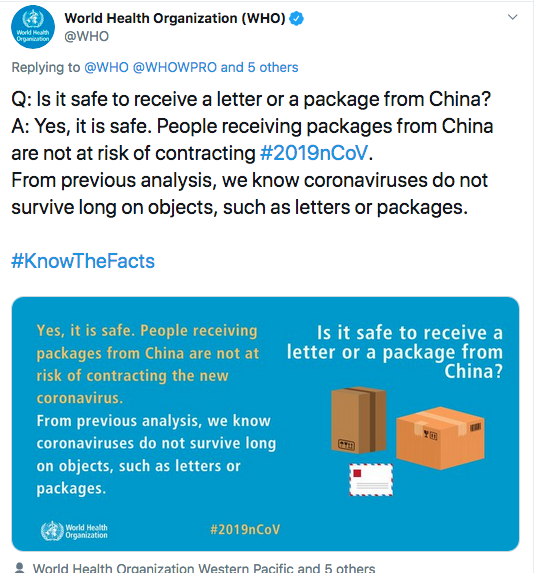 That is some good news!
Hopefully this outbreak can be contained quickly and tea, Chinese goods, and the people of China can put this behind them soon.
Any good being shipped from china, brings people with it. People to load and unload. A person to pilot the plane, or boat. People that are just located on the boat or plane. Lets also not forget that these viruses do mutate. Any virus that can kill and spreads like this should be of concern.
There is a great potential for this to effect logistics and harvesting practices of tea in China and Taiwan.
How much of this is overreaction from westerners is hard to quantify. Thats why I made the OP.
Sounds like this thread has given some good info.
Top

I don't think that "People to load and unload" are the same people coming from the China to offload the cargo in US after. The Passengers airplanes have been already restricted to US in some scale ( I don't know the latest updates ) . So if only cargo airplanes are allowed , then only pilots would be a risk.
If those get banned as well , then I'd suggest to stock up the tea before it happens. Because this virus thing will be a year issue , I guess.
Top

I recommend our forum members post on the topic, thoughtful and on point, thanks!
https://teaintheancientworld.blogspot.c ... xVP0j-e7Ac
Top

Indeed the world is small. Last month I shared a plate of BBQ with the gentleman who established the Office of Health Affairs within the Department of Homeland Security with Tom Ridge. The gentleman sat across from me. To my left was another microbiologist who worked at USAMRIID and was one of the first individuals to study Ebola in the U.S. (during the 1970s, I believe). He specialized in AIDS research but I am certain he was pulled into other areas of research during the Cold War. It took a strong stomach to eat with these two swapping horror stories!

During another dinner I found out a friend of mine was worked with and was friends with Bruce Ivins, accused posthumously of the Amerithrax attacks. My friend confided to me that his coworkers felt he was a scapegoat. This came as no surprise to me based on my personal experience with a desperate FBI. But I’ll hush now.

Oh, there are more stories and the world is smaller still.
Top

Certainly not the first I've heard that re: anthrax scare, Baisao. Those gentlemen would certainly know better than I though.
Top

As for the accurate reporting of numbers, my personal experience with a family member who acquired West Nile leaves me feeling underwhelmed by the reporting of county health departments and the CDC.

Her case was not reported to the CDC and did not make the county tally because she had antibodies for West Nile and chikungunya, despite presenting the tell tale rash on the palm one gets with West Nile but not chikungunya.

It was one of the most frightening things I’ve ever seen and I think we were so rapt in gratitude for her pulling through that we didn’t press to get her added to the county tally for West Nile.

After a while I became concerned that these cases may be underreported, which gives the public a false sense of security and causes other problems.

But there’s more you should know about surviving unusual viral diseases. Begin rant:

Now, after surviving the acute phase, she is dealing with the chronic effects of West Nile, for which there is virtually no study.

We see people treated for tropical diseases around the world, the WHO swoops in and beats back the acute phase of these diseases to the point where they are no longer being transmitted, then the doctors and cameras fly home.

Meanwhile, there are survivors living with the chronic phase of these diseases with little to no help whatsoever.

Too true. Chronic sequelae are not followed up on too much. I'm truly sorry your family was treated that way.

I can think of some more recent work showing longer term issues after WNV in the mouse models we use in the laboratory and efforts to understand why. We were also trying to get funding to study these in our research group.

With regards to reported case numbers, that is to be expected with any outbreak for a lot of reasons. In addition to issues like the one you ran into, inapparent infections just aren't going to get caught until long after the outbreak is over so the actual number infected might be higher. There's always going to be asymptomatic cases of any virus.

To be fair, the "suspected case" number may also be too high in other respects. For example, in a Zika study I collaborated on, as many as 1/3 of our "suspected Zika cases" that presented with symptoms of Zima including headache, rash, conjunctivitis, etc....had hay fever/seasonal allergies. The suspected case number can be quite off for a lot of reasons independent of governmental impropriety.
Top

@brutusK, that’s reassuring to hear on all counts.

As far as how my family member was treated, she was treated well. I only wish there was more known about how to treat the chronic phase of the disease.

I also wrote that while half asleep so I don’t know that I was very clear.

I feel like we forget about victims of infectious diseases once the acute phase is under wraps. I suppose it was the same as far back as polio: once there was a vaccine, less funds were committed towards finding a way for survivors to live better lives. Maybe I am wrong.

Hopefully you were able to secure funding for your WNV research. It’s desperately needed.

Anyway, this experience has me concerned for those who survive nCoV but have chronic illness from it. Long after it’s left the headlines there will be people dealing with it.
Top

In the case of corona, Taiwanese media are posting all sorts of worrying news:

- people who are getting turned away due to lack of beds available and then pass away are not being counted in the official casualty numbers.

- people who pass away are cremated almost immediately without any further cause of death investigations.

- those cremation facilities are running around the clock.

No Idea how trustworthy the media in Taiwan is (often it is not), but in any case a lot of information that has been reported in the West I had actually heard a few days earlier in Taiwan.
Top

Very cool to be mentioned, thanks!

I've moved on from considering that risk, since there doesn't seem to be one, to how to take the outbreak and potential global pandemic. Almost everyone in Bangkok is wearing a mask but that seems a bit pre-emptive at this point. There have been 25 confirmed cases in Thailand, and the count of actual infections must be higher, but the contact risk still seems limited.

In a sense it's odd we're not hearing people discuss the issue of what Chinese people are going through. They've extended and broadened the New Year's shut-down until the 10th, and of course things are creepier in the epicenter where all vehicle traffic has been shut down.

The universal reaction in other countries is to cite how many people have died from the conventional flu there. Sure; it's more. It's odd how body counts are only one part of how we judge how to react to a crisis. While I'm rambling I'll mention a Wikipedia quote that helps place that:


At least 10,000 people have died of the flu in the US this season, according to the CDC, with the current coronavirus death toll at 492, per the official count. I think Americans are just burned out from reacting to crisis and tragedy, as much as it's a factor that they don't care because this is happening in China.

Global risk--the likely impact for everyone else--is hard to place, so panicking or ignoring this are both kind of valid options.
Top
Post Reply
53 posts