I just came across this article. I really like Aeon so I am particularly happy they decided to write about tea.

Thanks for sharing, Aeon is an interesting non-profit group. Look forward to reading this.
Top

Just read it myself. History of tea trade as the centerpiece argument to change understanding of what is no less than modernity itself, and where and how did it get here! Highly recommend.
Top

An illuminating reading, and very well written. Thanks for posting. @lUKAV28
Top

Yes, a rare, well written essay on the topic of tea.
Top

A very helpful series is John B. Cloughley's "Storage Deterioration in Central African Tea" from 1980. It is a set of three papers, "The Effect of Some Production Variables on Theaflavin Degradation", "Methods of Reducing the Rate of Theaflavin Degradation", and "Changes in Chemical Composition, Sensory Characteristics, and Price Evaluation". Mr. Cloughley was a researcher at the Tea Research Foundation of Central Africa in Malawi.

While these papers were originally targeting packers trying to maintain auction prices, I think that understanding what happens to tea as it sits on the shelf is also helpful for tea-drinkers to understand.
Top

This is an interesting paper on effect of scenting during jasmine tea production:

Chinese jasmine tea, a type of flower-scented tea, is produced by repeatedly mixing the base tea with the aromatic flowers of Jasminum sambac. The aim of this study was to analyze the changes in the volatiles, chemical components, and antioxidant activities of Chinese jasmine tea during six rounds of the scenting processes. The results indicated that benzyl alcohol, linalool, benzyl acetate, (Z)-3-hexenyl benzoate, methyl anthranilate, indole, and α-farnesene were seven major volatile compounds of jasmine tea. Moreover, the total amount of the volatile compounds increased gradually with increasing scenting rounds. The absorption of linalool became saturated quickly, while those of the other six major volatile compounds exhibited nearly linear increases throughout all six repeated scenting rounds. Importantly, the value of the jasmine tea flavor index, an evaluating indicator of the aroma quality, gradually increased with the progression of the repeated scenting rounds. The change of each detected taste component was less than 15% during six rounds of the scenting process. The antioxidant activities of the tea samples decreased in the first two rounds and later increased in the succeeding four rounds of the scenting process. However, the antioxidant activity of the finished tea was lower than that of the base tea, being significantly correlated with the change of catechin concentration. The findings provided insight into the changes in the volatiles, chemical components, and antioxidant activity of Chinese jasmine green tea during the repetitious scenting process, which could provide beneficial insight on improving the quality grade of the tea.

Here is my takeaway:

They looked at changes in volatile compounds and antioxidant activity over the course of two types of jasmine tea processes: modern and traditional:

They track volatiles and antioxidant activity over the course of the process. There is a long list of volatiles in the linked paper.

Volatiles increase greatest btw rounds 1 and 3. You get diminishing returns after round 3. This seems to confirm that at least 3 scentings should be done. Sample size is low so hard to draw a hard conclusion.

Antioxidants seem to decease in general, but the amount doesn't seem to be too much.

N = 3 for each process so hard to really say anything statistically significant but paper suggests modern processing is superior in terms of maximizing scent and preserving antioxidant activity. 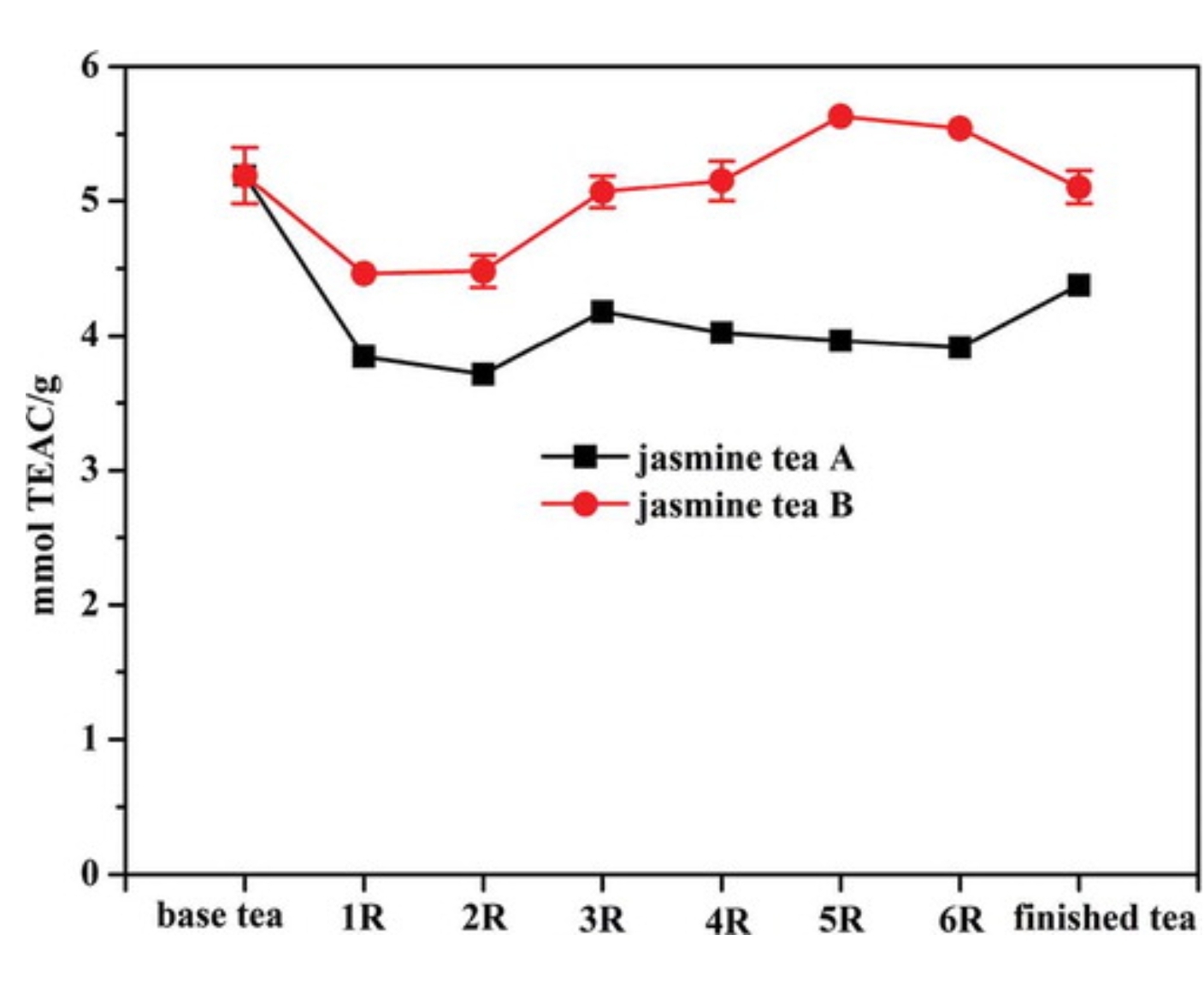 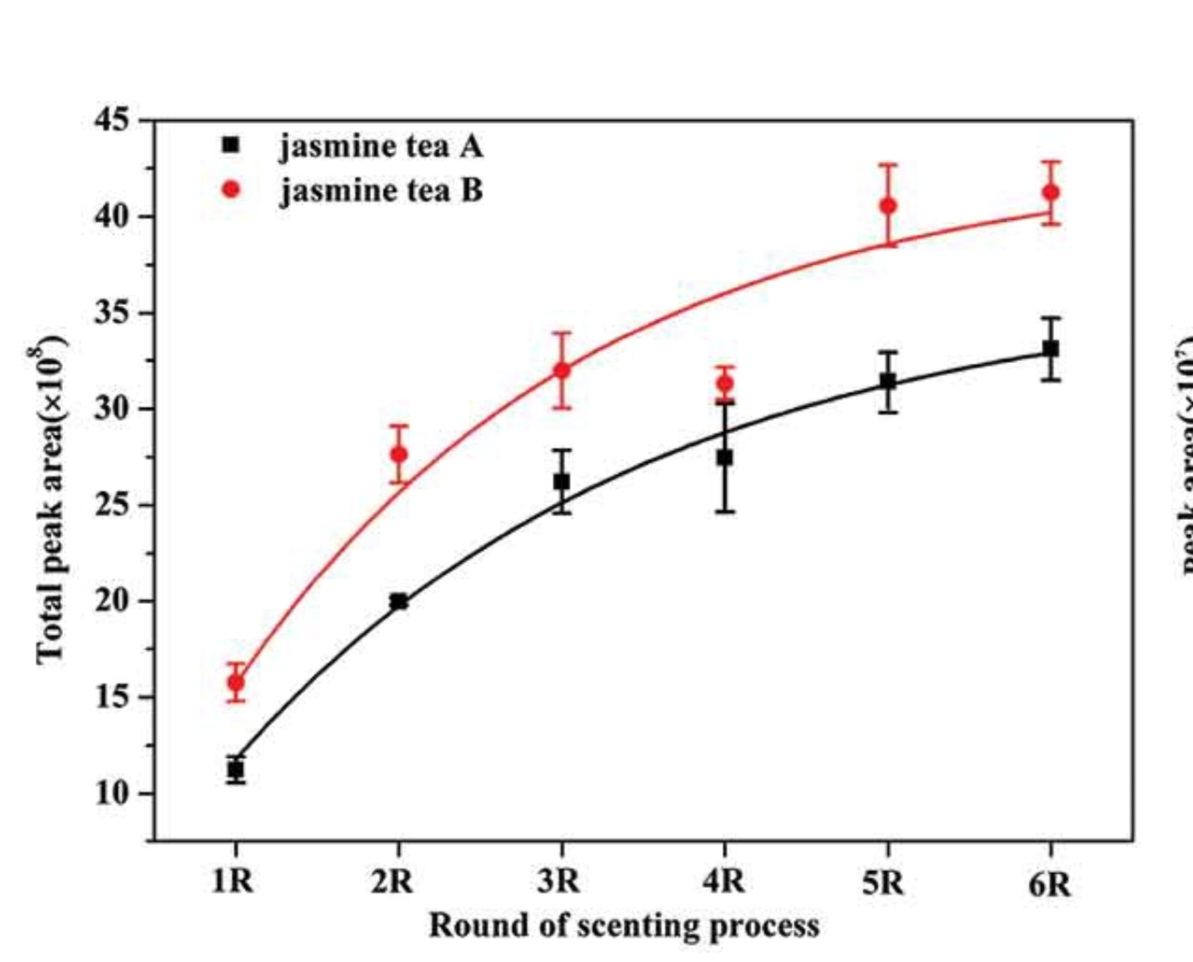 On a recent conversation with Tiago of TeaEncounter mentioning some of my impressions & contradictions while trying to pick up notes on teas ( particularly that unicorn i keep chasing named "sweetness" ) he pointed me to this particular - and very interesting - article ( six .... hundred

It's been released under a CC license, free to download:

Besides water, tea is one of the most popular beverages around the world. The chemical ingredients and biological activities of tea have been summarized recently. The current review summarizes tea aroma compounds and their formation in green, black, and oolong tea. The flavor of tea can be divided into two categories: taste (non-volatile compounds) and aroma (volatile compounds). All of these aroma molecules are generated from carotenoids, lipids, glycosides, etc. precursors, and also from Maillard reaction. In the current review, we focus on the formation mechanism of main aromas during the tea manufacturing process.

Tea is the second most widely consumed beverage around the world after water [1]. The popularity of tea as a global beverage rests on its pleasant flavor, mildly stimulating effects, and nutritional properties, which people find appealing and attractive. According to the manufacturing process, tea can be divided into at least three basic types: non-fermented green tea, fully fermented black tea, and semi-fermented oolong tea [2], [3]. The flavor of tea can be divided into two categories: aroma, which consists mainly of volatile compounds; and taste, which consists mainly of non-volatile compounds. The volatile aromas are important criterion in the evaluation of tea quality.

Nowadays, more than 600 volatile compounds have been reported during the tea manufacturing process, and these compounds can be divided into 11 classes [4], [5], [6]. All of these aromas are generated from four main pathways: carotenoids as precursors, lipids as precursors, glycosides as precursors, and Maillard reaction pathway. To the best of our knowledge, no previous study has provided the details of formation mechanisms for tea aromas. Therefore, in the present study, we review main aromas starting from the manufacturing process, with biological and chemical mechanisms.

It includes some flavor descriptors for the various compounds in the figures. COOL!
Top

I thought this was helpful for understanding "gift tea" culture, which always baffled me as someone who learned about tea first through British-style teas. It is also interesting to read how guanxi is changing under the pressures of modern advertising and anti-corruption laws.


“A Changing Tea Culture, A Changing China: Variations in Conceptions of Gift Tea among Tea Sellers” makes substantial use of original interviews and observations with twenty tea sellers across Jinan, Shanghai, and Beijing to show that tea culture is changing with new generations of consumers and sellers. Drawing on existing literature on tea and gift-giving in China, Wang shows that an increase in young consumers—as well as government policies—have changed how people gift tea in China. The major contribution of this work is that it examines how the cultural and economic meaning of an object can change following an exogenous shock—i.e., the 2013 anti-corruption campaign. After the structural dismantling of public and social meanings that resulted from the crackdown on luxury gift items, tea sellers turned to consumer values to a greater extent in their conceptualization of tea as a gift object.


The tea green leafhopper (Empoasca onukii) can be a widespread pest on tea, but some tea farmers take advantage of leafhopper-induced metabolites in order to produce high-quality “bug-bitten” teas such as Eastern Beauty oolong. To understand the effects of increasing leafhopper density on tea metabolites important for quality, we conducted a manipulative experiment exposing tea plants to feeding by a range of E. onukii densities. After E. onukii feeding, we measured volatile and non-volatile metabolites, and quantified percent damaged leaf area from scanned leaf images. E. onukii density had a highly significant effect on volatile production, while the effect of leaf damage was only marginally significant. The volatiles most responsive to leafhopper density were mainly terpenes that increased in concentration monotonically with density, while the volatiles most responsive to leaf damage were primarily fatty acid derivatives and volatile phenylpropanoids/benzenoids.

treatment in study: 0, 0.5, 1, 1.5, 2  hoppers/leaf (these are the target treatments for the experiment. They estimate actual ratio at sampling.)

volatile sampling of undried leaf: leaves were dried by microwave and analyzed for:  take aways:
Strongest correlations between hopper/leaf and the following volatiles:

I have attached the figure of the plots so you can decide if these relations are meaningful. Note several of these are also found in honey. Also note that some volatiles appear to plateau at about 0.3 hopper/ leaf. Some others need at least 0.6 hopper/leaf.

no significant correlation between leaf damage and volatiles 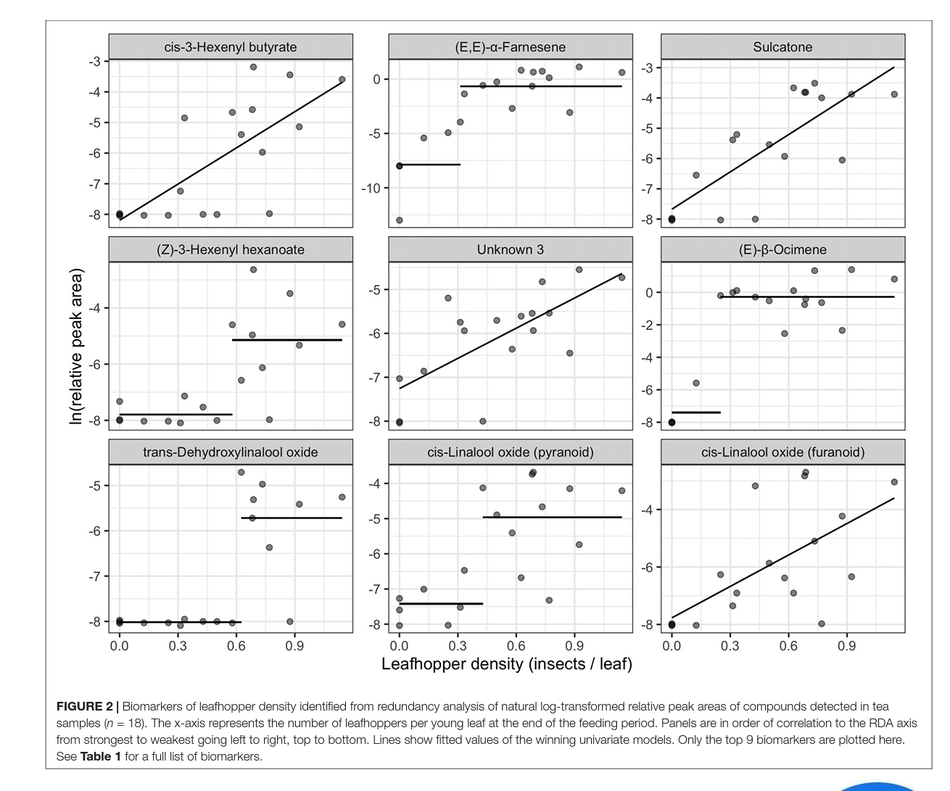 Did you learn which specific flavors were induced by bites?

Did you learn that there is an ideal amount of biting? It seems that there cannot be too much since the leaves recover, is that so?

Did you learn that there is an ideal amount of biting? It seems that there cannot be too much since the leaves recover, is that so?

I updated my post with a brief overview. I dont have time to go deeper, but for those interested, it is probably worth reading as the methodology seems rigorous and there are many references.
Top

LeoFox wrote: ↑
Sun Feb 28, 2021 12:01 pm
I updated my post with a brief overview. I dont have time to go deeper, but for those interested, it is probably worth reading as the methodology seems rigorous and there are many references.

That's really impressive. Amazing really. I'm a guy that mostly wants to know does ist taste good? Or, once in a while get interested in generalizations, such as does biting make the tea better? But is is impressive. Cheers
Top