Show Off Your Pets

Was on the old teaforum today, searching for some photos of our cats. Vaguely remembered a 'Pet' topic and sure enough found it!!!

Strange how that topic remained, all 27 pages, and the extremely important and informative OTTI Forum and all the OTTI topics were purged

Albeit, I was glad to find the pictures I was hoping find.

That being said, thought it might be fun to start a Show Off your Pet topic here.

I'll start with Moe. He is our largest cat at about 14 lbs and is the cat clan's town crier and head 'butter'. He is extremely lovable and as always wants to be cuddled.

I always get a tad anxious when I see a cat so close to teaware. He must be really well behaved.

He's cute, though. I'm sure he gets plenty of cuddles!
Top

Maybe I'm just too accustomed to my wife's sense of humor, but I half-expected to see a photo of Chip.

He would have said " No more tea for you", if I would have done that!!! Can't say I didn't think about though

i love cats and have had 8 of them over the years. i've got 4 now (3 of which were born late last year). i'll get them posted soon, but i'll start with Dolly: 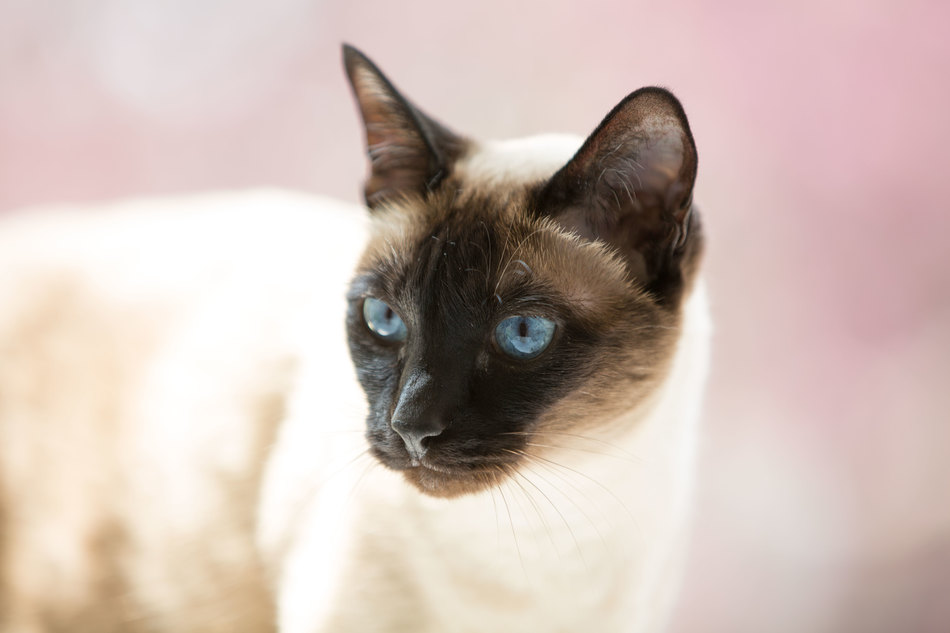 she is no longer with us, but i couldn't resist posting her because she was an unbelievably awesome cat, and i have a cool pic of her. she was pretty photogenic.

she was also extremely talkative. if you said something to her, she'd almost always respond. and she was very cuddly and stubborn. even if you were in the middle of something important, she'd always jump on your lap. set her on the ground, and she'd immediately jump right back up. several times in a row until she got her way

we still have her brother from the same litter. i think he's 16.
Top

pedant, Dolly was beautiful, yes I had a Siamese that never shut up, lol.

Thanks for sharing her with us. I love cats too, more pictures to follow.
Top

That photo remind me of the Siamese I had growing up. When I was a boy he would come into my room and paw at my neck until I would lift the blanket. He would then climb under and stick his head out onto my pillow with me. God, I miss that cat.

Dresden wrote: ↑
Tue Jun 18, 2019 9:42 pm
That photo remind me of the Siamese I had growing up. When I was a boy he would come into my room and paw at my neck until I would lift the blanket. He would then climb under and stick his head out onto my pillow with me. God, I miss that cat.

We once had a cat living with us (for 16 years) that would do that pillow thing. He was solid black but with a body like a Siamese. I wonder if it’s a trait of the breed?
Top

He's cute, though. I'm sure he gets plenty of cuddles!

Our polydactyl kitty, Coi, a beautiful tabby with a crooked face broke at least one!
Top 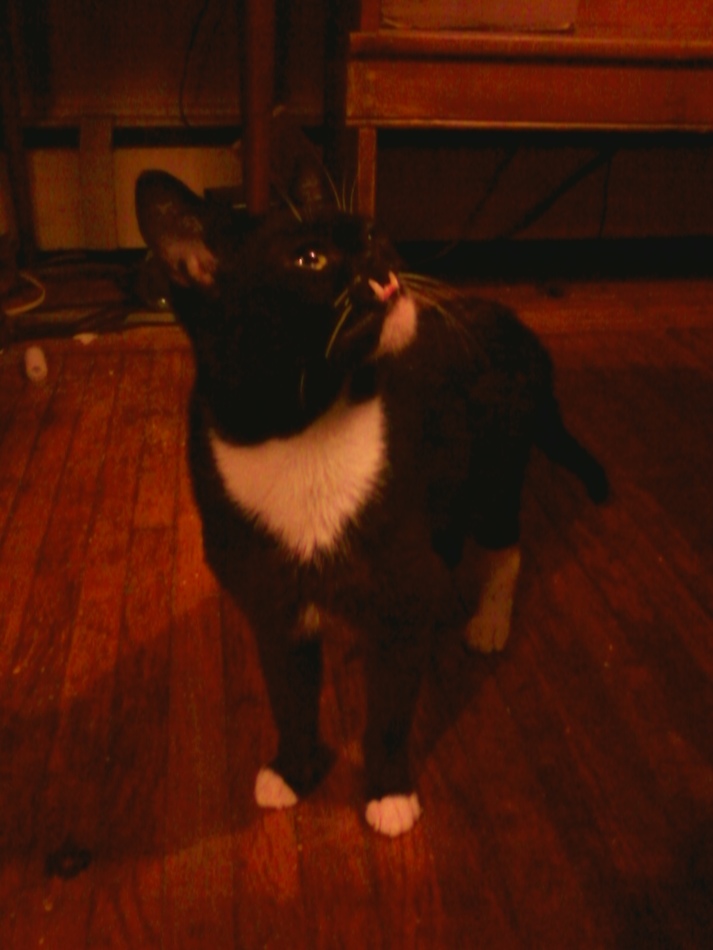 This is our Debonnaire Fuji rescue. We lost him in 2016 after 8 years of joy with him. He has quite a story behind his rescue. Many of you may remember his story from TC.

i do not know his story. could you please repost? 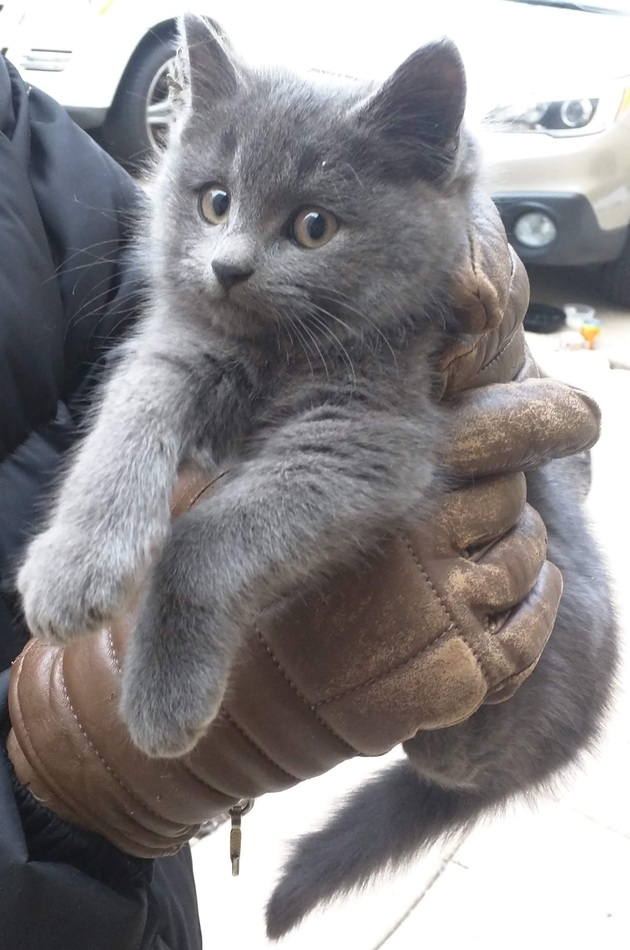 this is one of our new cats. we found him last fall trapped in the garage. he was about 8 weeks old at the time. slightly beyond the deadline for ideal socialization, but we handled him tons (many hours every day) to make up for it. he's very sweet but gets spooked kind of easily and sometimes hides from unfamiliar people.

as you can see, he's adjusted to indoor life just fine: 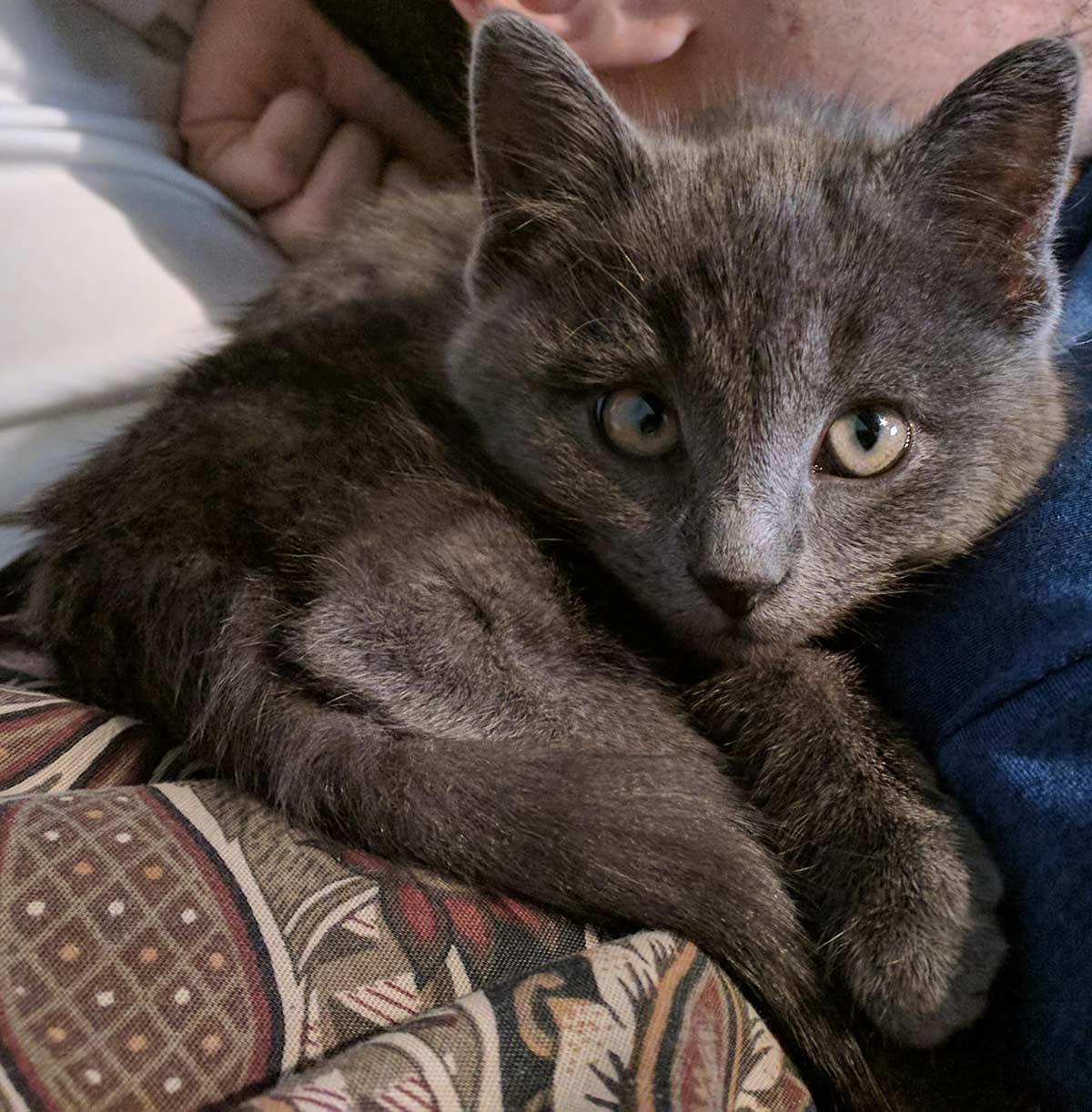 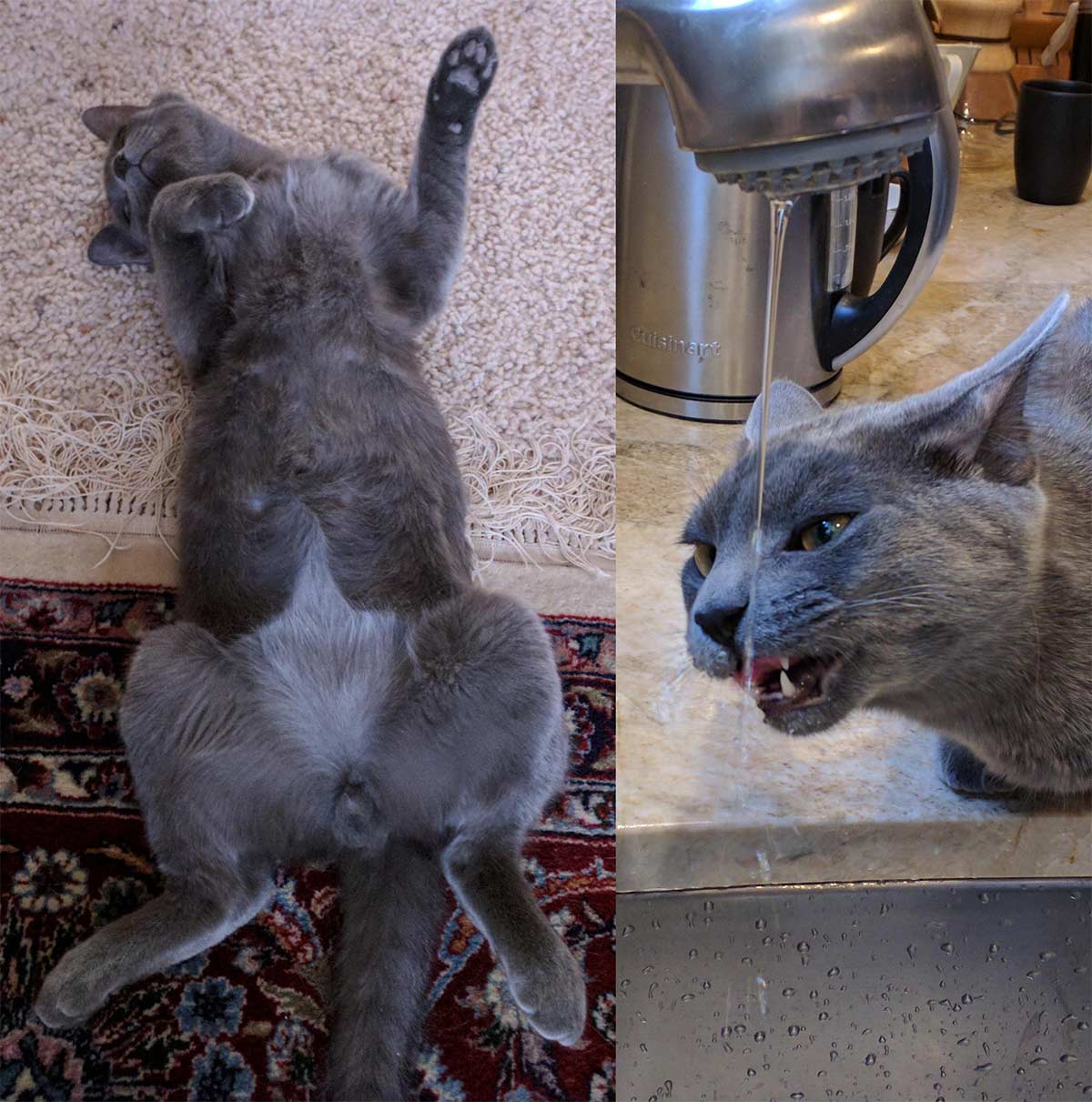 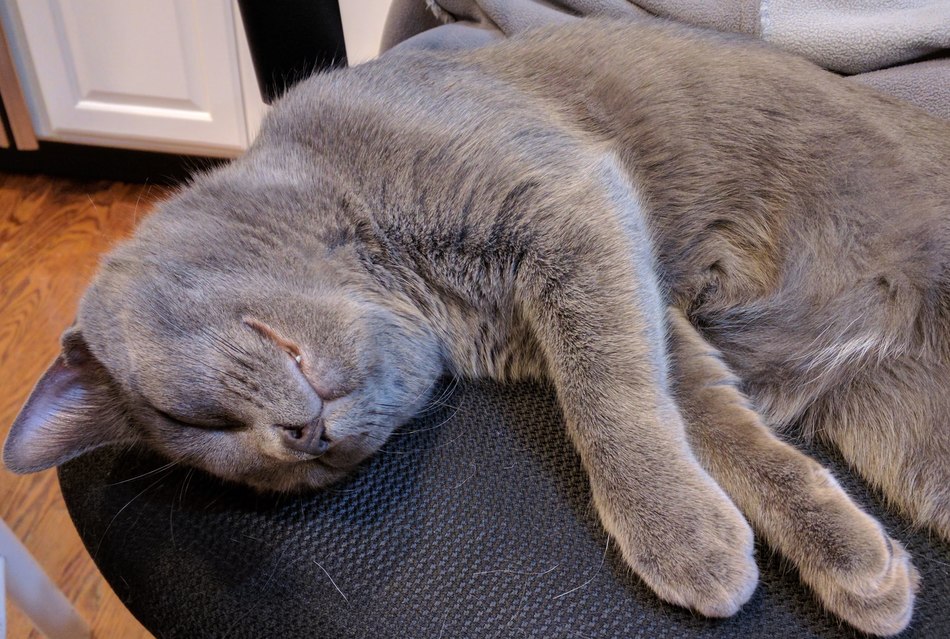 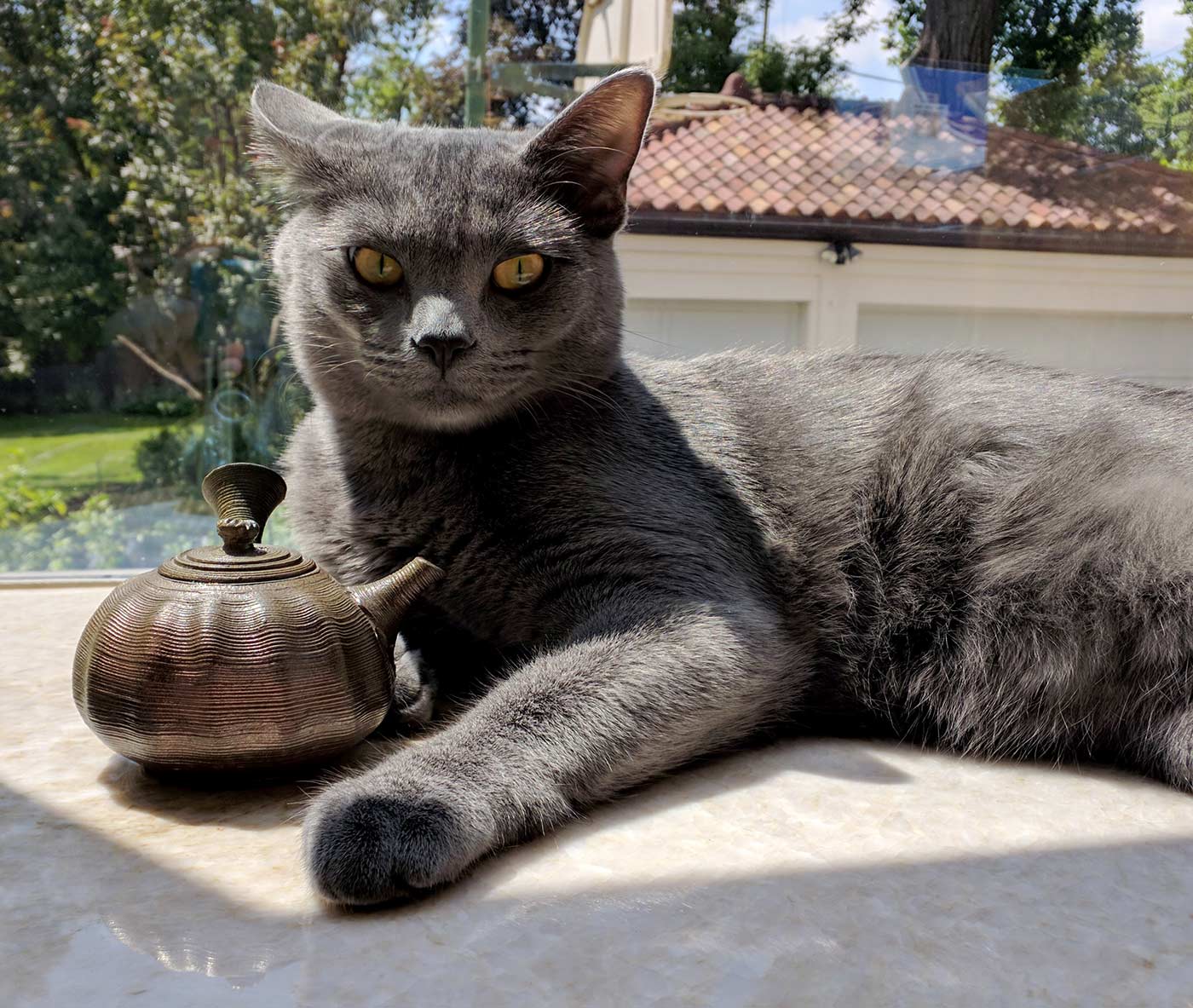 He is a cutie, so adorable. Yes, I will post Fuji's story.
Top

pedant, Fuji was so named in an attempt to garner support for Chip to allow us to keep him.

He was severely injured, attacked in our greenhouse by a wild animal. He was bitten through the front of his face, crushed nose, upper palate splittered horizontally and filled with maggots, and upper jaw hanging by a thread.

Chip did home surgery to remove his barely attached jaw . We whisked him off to the vet, who have him a 10% chance of making it. However, our vet knew I would not let that stop me. Fuji went to work with me at a privately owned flowershop daily. I had to clean the roof of his mouth quite a few times a day and of course bottle fed him with care.

Our miracle survivor's nasal cavity was almost totally crushed, thus his breathing was 24/7 snorting like a pig. Lots of fun at night as he took turns sleeping on our heads. His constant improvement amazed our vet.

He learned to eat wet cat food, steam shovel style, while snorting all the while.

He also looked like a vampire with only 2 incisors on his lower jaw with 2 very small teeth in the center.

He is dearly missed.
Top 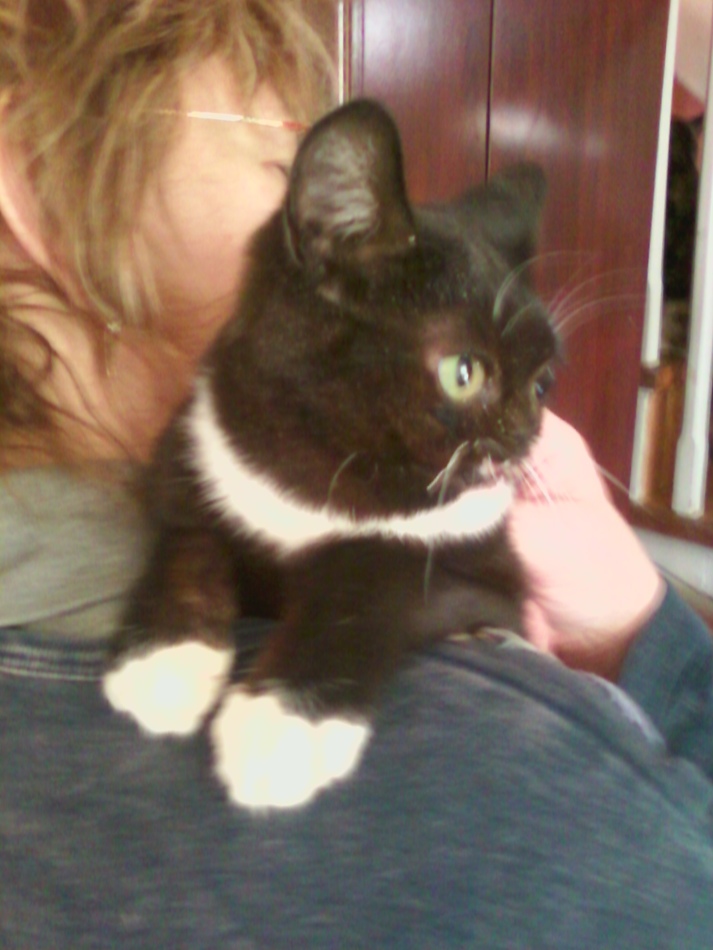 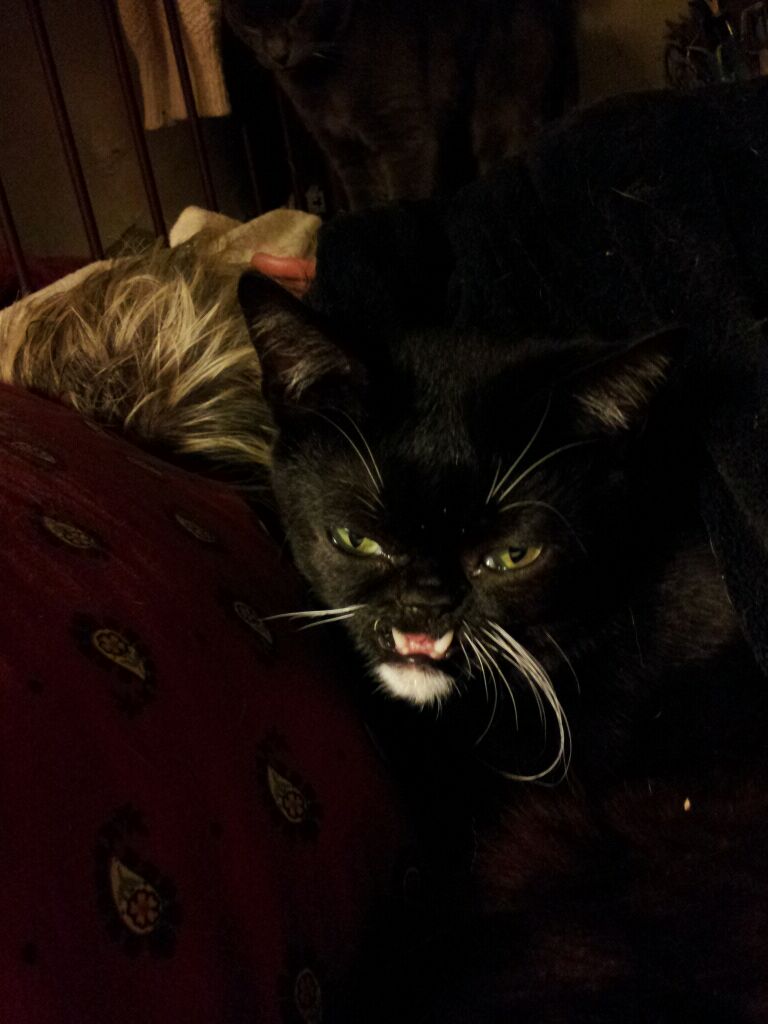 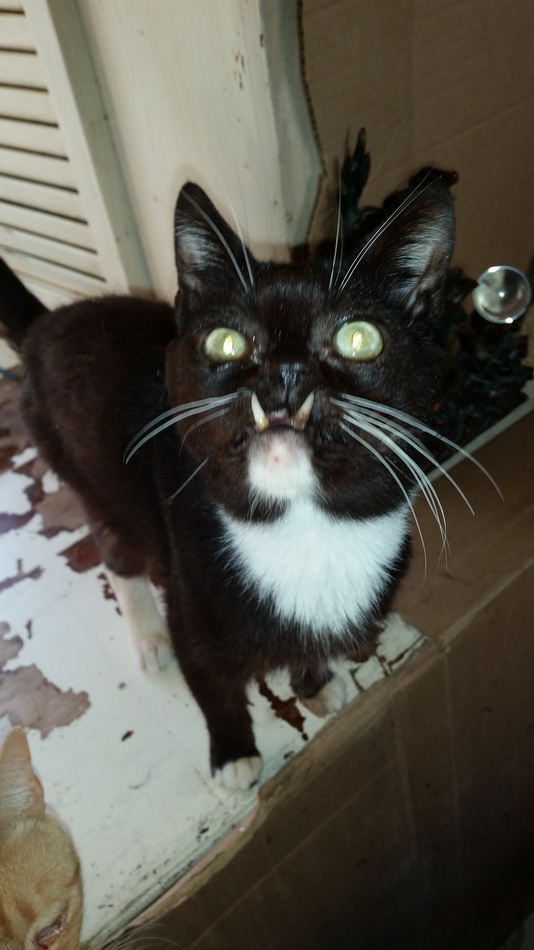