Ode to the Kyusu

No idea how to judge lead risk of glaze without a chemical test....I have plenty of cups with crackles and other interruptions to their glaze, but they're all from potters I trust to not use any leaded glaze. 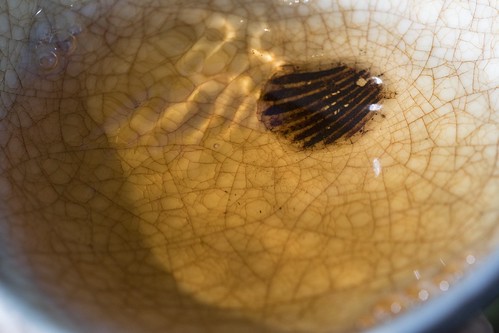 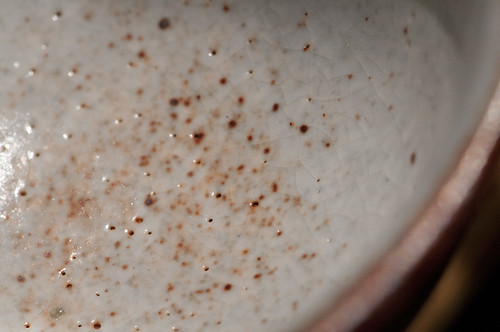 debunix wrote: ↑
Wed Jun 05, 2019 8:41 pm
No idea how to judge lead risk of glaze without a chemical test....I have plenty of cups with crackles and other interruptions to their glaze, but they're all from potters I trust to not use any leaded glaze.

Sometimes it is not the intentional use of lead-containing glaze, but the incorrect use of otherwise safe glazes.
Top

debunix wrote: ↑
Wed Jun 05, 2019 8:39 pm
No idea how to judge lead risk of glaze without a chemical test....I have plenty of cups with crackles and other interruptions to their glaze, but they're all from potters I trust to not use any leaded glaze.

Hi Debunix, I understand what you are saying, I have also some crackled ceramics, my concern with those glazed Banko cups is that 1) the glaze really looks milky compared to the crystal clear like on Novak's (?) you are showing. 2)Holes in there, not sure how this was fired, and 3)if you pour hot water they basically soak it underneath so it creates maps.
I guess I will wait for my trip to states later this year and will buy some lead test swipes to see.

That pot is cute though. I like the smallest one most but this will get proper usage too. Have to compare what tea comes out of it though.
Top

Having used a gyokko as my only kyusu for a while I decided I would treat myself to something new.
Several emails were exchanged with Toru and I ended up with a 200ml hobnail from Touju, along with cups to suit.
I have always loved the aesthetics of his pots, and this feels and handles as well as It looks to me. The gyokko just doesn't feel balanced anymore.
I think I will be on the look out for more of his stuff. 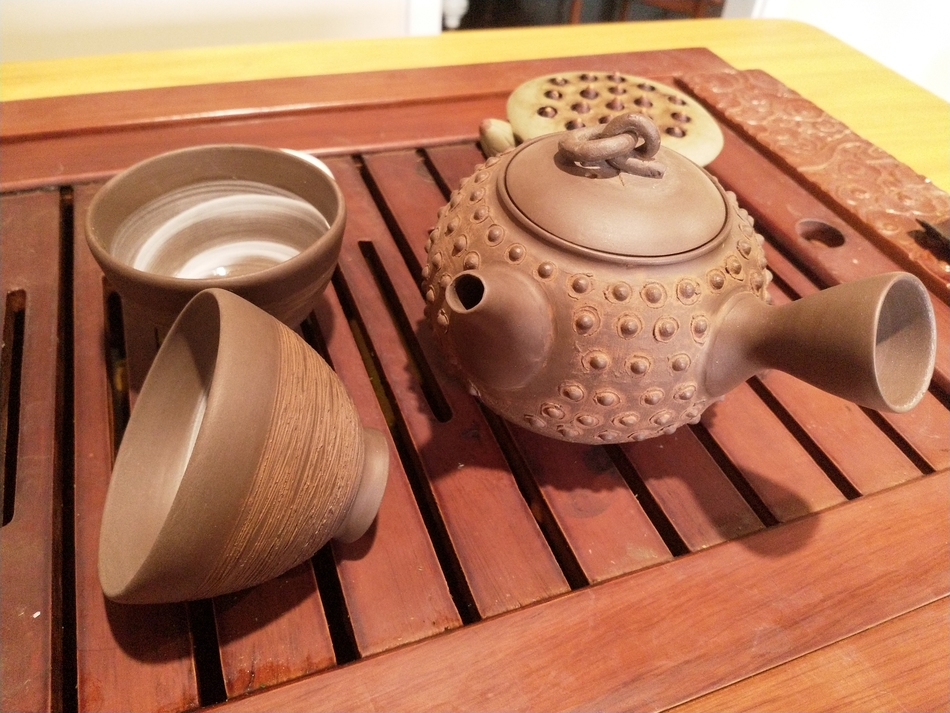 Coincidentally, we used ours, also a 200ml this morning to brew Yutaka Midori from O-cha.

A tad bit small for a 2 person brew. Chip says sometimes a purchase is made based solely on aesthetics and hoping for the best. This pot is easy to handle and the YM was delish.

Chip has no idea of the type of clay. Enjoy your pot.

I do have their yutaka Midori here, but I haven't opened it yet. I had their miyabi last night in this kyusu, which came out balanced and the clay didn't appear to have too much effect on it. I am still very new to Japanese teas and clay though so I have a lot to learn.
I have however been collecting and using yixing regularly over the last few years, so I am aware of the gamble that is purchasing a pot by how it looks. This is also by far my largest pot so it feels like a monster in comparison, but it seems like the perfect size for myself.
The lid fit is perfect at any angle, and the filter allows the last drop to flow through with ease.
I definitely like this pot and it will see lots of use with me.
If you decide you want to let go of some of your Touju kyusu I will have a home for them in Australia

I am sure Chip will see this, but I will pass this on to him.
Top

Just got this lovely mini shudei kyusu. Ball filter inside.do not know anything about it and author or age. Anyone can help with the stamp?
Thanks 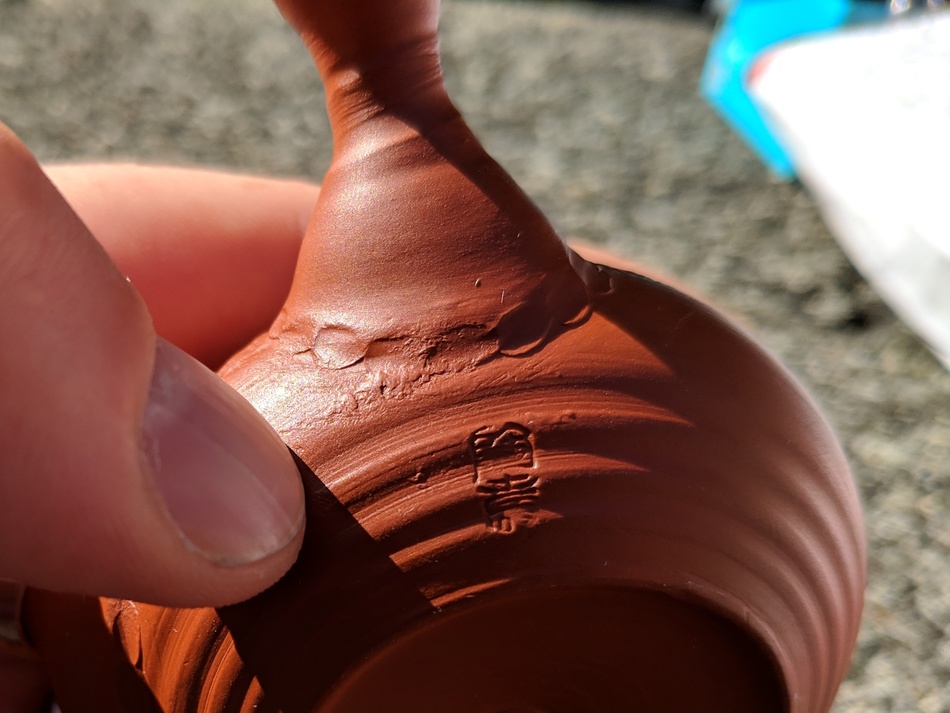 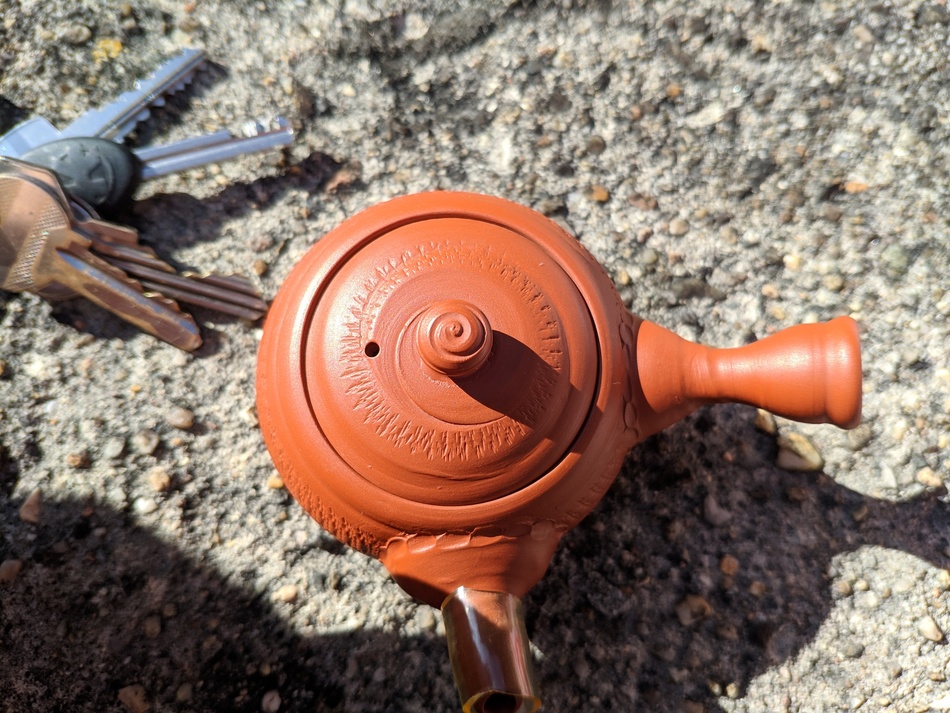 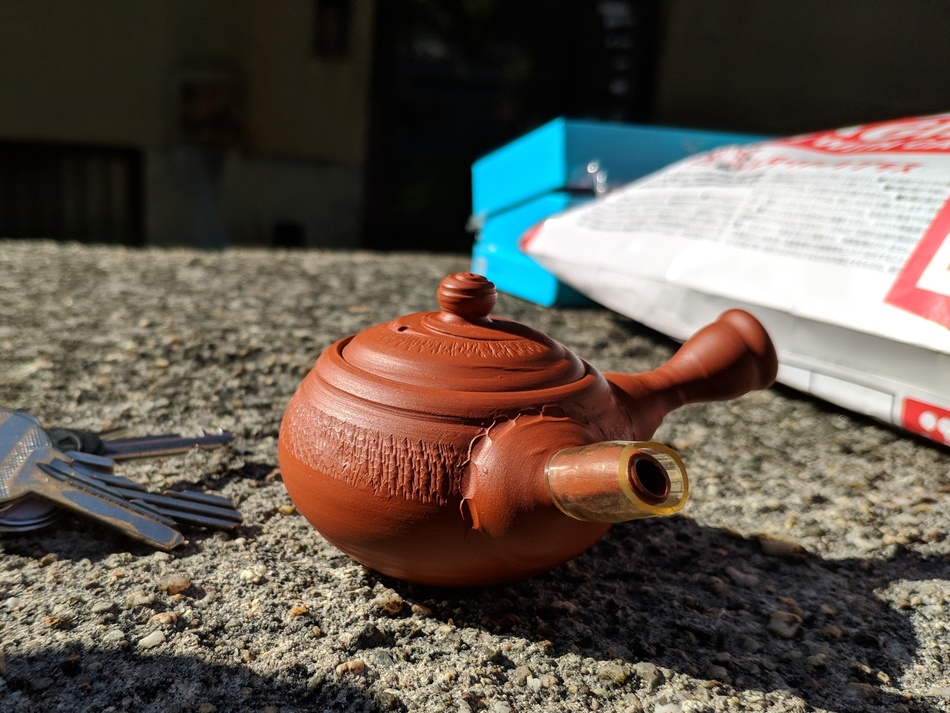 found the same author only bigger kyusu on ebay. can anyone advise on author?
https://www.ebay.com/itm/A137-Antique-J ... SwYX9dMDwO 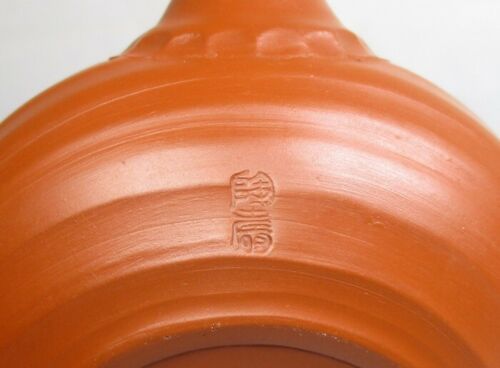 Looks like it’s made by a Tokoname artist using typical red clay from the area. I quickly looked at Tokoname.or.jp but didn’t see this particular stamp.
Top

Thank you Victoria. I did not know the page you linked. Useful and booked. Thank you
Top

Coming to my second spoil from an elsewhere mentioned successful stroll over the antique vintage market in Taipei this weekend... a Yamada Jozan III in 200ml! Well, if it is a III, I am no expert on the matter... I only asked the price out of curiosity, it turned out to good an opportunity to pass, so I got it. 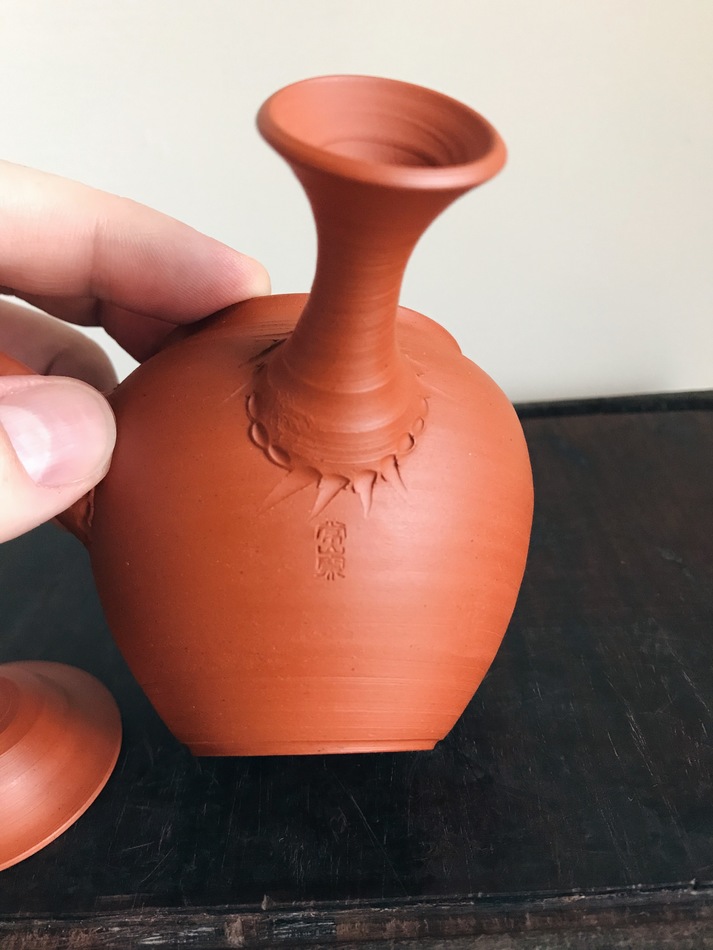 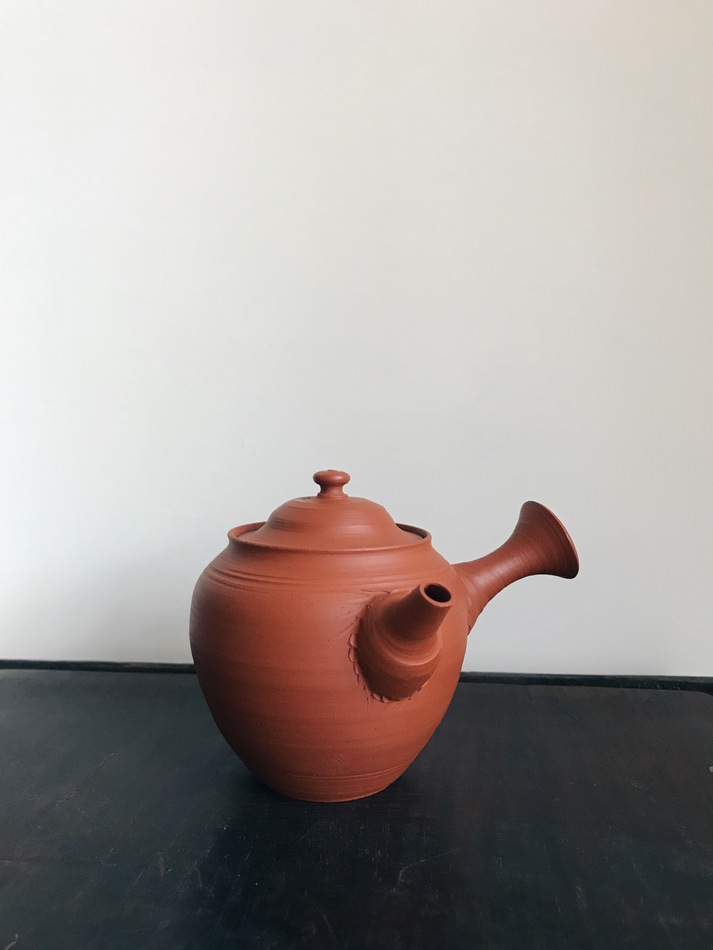 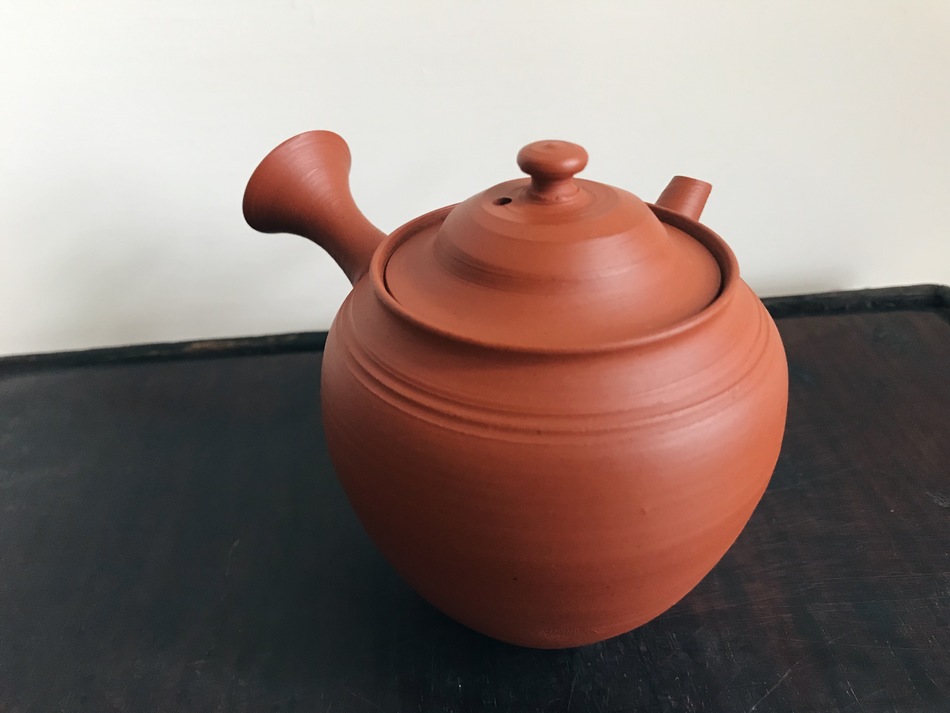 Bok wrote: ↑
Sun Sep 22, 2019 8:47 am
Coming to my second spoil from an elsewhere mentioned successful stroll over the antique vintage market in Taipei this weekend... a Yamada Jozan III in 200ml! Well, if it is a III, I am no expert on the matter... I only asked the price out of curiosity, it turned out to good an opportunity to pass, so I got it.

Still debating, but I’ll probably put this one up for sale as well. It is beautiful though...

Really nice kyusu @Bok. The stamp on that is Jozan Kiln. It is probably the work of Jozan III disciple. Will make very good LiShan if you decide to keep it.

Was lucky enough to travel to Japan recently and included a stop in Tokoname. While there I visited the Isobe gallery who were absolutely nice and wonderful people. Asako was out that day so when I first went in no one there really spoke English and my Japanese might as well be non-existent("that one", "how much is it?", "ah...I'm sorry, I don't speak japanese"), but having my collection as photos on my phone was enough to get us started and I was lucky enough that one of their friends who could translate for us did happen by the shop on my first visit there. They were my first stop in the morning so I didn't really want to buy anything right away, but the selection was vast enough and they were so nice I resolved to make them my last stop in the afternoon.

So, come 4PM I rush back in there to buy a Yamada Sou smurf pot and as I'm deciding on just which one to get "Oh btw Kohokujo is here" We say hello and do a little chatting with the assist of our phones. I figure as long as he's there I might as well take a look at what they've got by him, I've liked some of his pots and the idea of having pots by different generations has its appeal. There are a couple on the shelf that look nice but nothing that really stands out until they bring out a tray from the back with a bunch more on it(perhaps ones that had just dropped off as my "how much?" ended up directed over to Kohokujo") and one that was a bit more unique jumped out at me so now I'm buying my 3rd teapot of the day

We all sit down and share some gyokuro when in walks Shoyru who starts talking baseball.....

At this point my wallet is tapped, I'm thinking I'm going to need a new suitcase, and I'm just generally overwhelmed but it was still cool. Next just as I'm thinking about working up the nerve to ask for a picture Kohokujo says we should get his teapot out of it's wrapping as he'd like a picture himself

Then to top it all off he gave me and my mum a ride back to the train station.

Anyways, I thought I'd photograph his pot(decorated rim, light coloured partial ash glaze) next to the ones I already owned by his father for comparison. The new one is the smallest of the 3 and everything is scaled down a little. Spout is noticeably thinner but the end is of similar design. Maybe it is slightly less bluntly cut off but it maintains the superb antidrip pour of Hokujo's pots and comes in a strong smooth stream. I'll admit that for me the handle could be either a little longer or a little chunkier, it's short enough a choked up grip is the way to go but then something fatter at the end would rest easier. 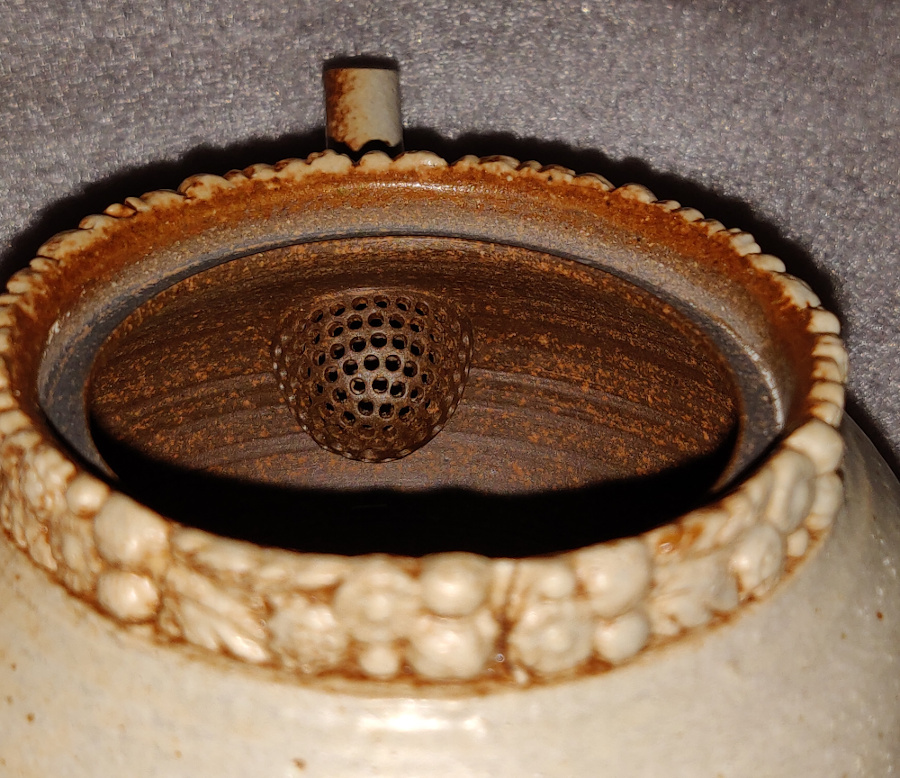 The underside of the lids for a clay comparison, although something better than my cellphone would be ideal for that purpose. Anyways as you probably already knew it appears essentially the same. Left to right - new pot, old Hokujo, old Hokujo rihi

I think of it more as silly teapot tricks than a useful test but, balancing acts. 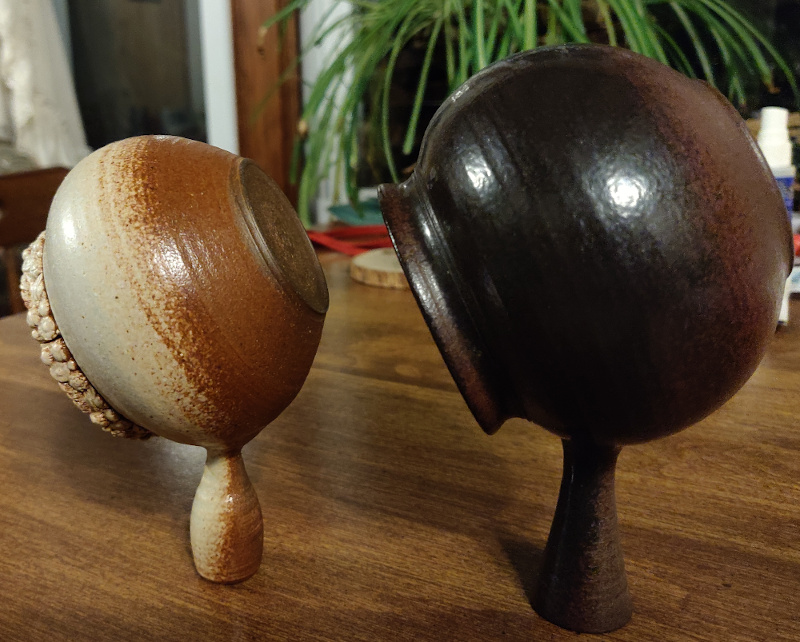 No points for figuring out who is who in this photo. 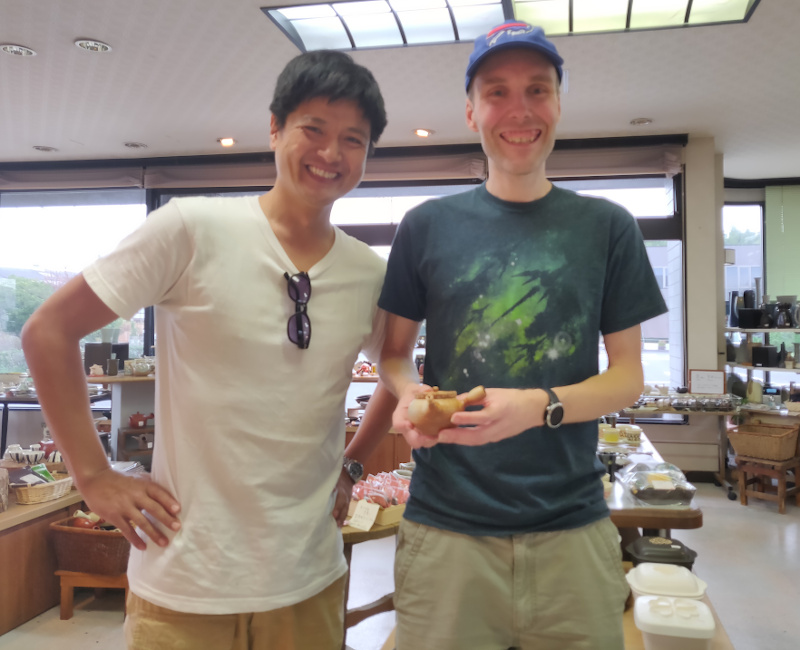