faj wrote: ↑
Thu Oct 27, 2022 7:51 pm
But then again, you could also say people mainly known to drink oolong might not have the most challenging teas to filter.

Aforementioned member of that group of people drinks also finely chopped Sencha with single hole pots, no spills, no clogs. It is all possible with a little practice.

@LeoFox, this is not finely chopped sencha. Also, not single hole. And it may be Yixing, but it is a hohin. No video, just pictures. My research tells me this is just a deepfake that you planted on the forum a few days ago just in case were would be having this debate later on. You will not fool me!

I’ll never put up a YouTube video, but next time I’m doing that, I’ll video it and send it to you

After all, before the Japanese invented their own pottery teapot tradition in Tokoname and elsewhere, they did use single hole Yixings. Can even find historical documents, including drawings of this.
Top

The worst of our times, just after climate change…
Top

Sencha ain't as bad as choppy pu in terms of clogging in my experience. Also, there must be a reason why golf ball filters came to be in demand for pots intended for export to Japan (from I believe around the 70s?)

I do agree that one can learn to pour in a way that works with almost any kind of filter and tea, just like one can learn to hear the temperature your water kettle has reached, but let's not forget that people have different talents for these kinds of things, not to mention time and/or effort resources available. It's not like everyone, or even the majority of people, are doing their everyday brewing in a focused, ceremonial setting.

I'm a single hole pot person myself, though I always keep a toothpick close by.
Top

Curiosity got the better of me and I picked up a kobiwako pot and thought why not give it a real thorough run-down with my long weekend. Right from the get go I will say this clay is gorgeous - I love all the coarse visible colorations in the clay and it has a very nice texture. I'm really curious how this clay will look with some patina. In comparison to other clays I use this one is incredibly light and porous. A lot of my other pots are quite thick and intentionally bought for heat retention - this one seems to cool quite quickly perhaps due to the porosity of the clay which will be nice for more delicate teas.

The craftsmanship is very nice - I got a single hole pot because it was all that was left and a new batch wasn't coming in for a while. It is a bit taller and less round than I am used to using and has a shorter spout than a lot of the others I have seen. If I get another I would also recommend to others getting one with filter holes. I put a metal filter in mine for now because otherwise it really has a cannon like pour which was bringing lots of leaf chunks out. Maybe this is my inexperience with this kind of pot shape though. All of my other single hole pots have quite small openings and a shape that makes what maybe is actually rather careless pouring a non-issue for me usually.

I wanted to test out a bunch of teas to get an idea of the effect of the clay. I started with some pretty unconventional choices but given I had been drinking these teas a lot it would make it pretty clear what was going on from the clay...

First up was a younger pretty broken up factory liu bao with some smokey notes - actually came out quite fine with not much dramatic difference to brewing this tea in nixing - including that the tea was still quite thick. This is somewhat surprising given how the next tea went...

Second tea was a 7581 brick I've tried in quite a wide variety of pots now. It was a disaster in kobiwako, but this also revealed a lot about this clay to me. This particular brick while still on the modern darker side than early bricks still has some bitter notes in it as well as almost salty/briney notes that I find quite enjoyable and a lighter date like sweetness that makes it much nicer to me than some over-fermented Menghai marshmallow bomb. But that is exactly what the kobiwako turned it in to - all I got was a dark tea with quite cloying sweetness, but a thick and lower tasting sweetness one would expect from a beginner's shou. It was like all the rest of the spectrum of the tea had just been scooped right out. This tea is also long past having any fermentation notes to it too, yet the clay was bringing something of that out of this tea making it taste like it was maybe only a year old. A very strong effect. Maybe others would be more favorable but I'm inclined to say this is NOT a clay for shu... or I just needed to be doing very fast flash steeps for much longer in this pot than I do in others.

Round three was HK high roast TGY. Ok, now I'm seeing where this pot will fit in for me. More pronounced aroma, nice thicker soup, and while the tea was sweeter. It toned down the yinyun profile - it was still very much there, but maybe a little more balanced than it would otherwise be given how this tea is. Also a more woody character was noticeable, like I could taste through the roast more in this pot. Also noticeably longer lasting aftertaste. Interesting how it was able to take a tea I like specifically for its rough around the edges character and mellow it out in a pleasant way, but that it still seemed less about 'muting' things than the CZ pot I often use.

For tea four I wanted to really put the effect it seemed to have on astringency to the test, so a dry stored basic Xiaguan sheng tuo seemed the best way to do that. The kobiwako did a really nice job of bringing out more aroma and 'middle' flavors of the tea while keeping the bitterness well in check. More of the hoppy/resinous flavors of the tea came out for me because I didn't have to get past the astringency of the tea as much. Normally this tuo gets not particularly pleasant to me as it brews out because the astringency of the tea still remains high even as the soup lightens - but with the kobiwako the whole session was more enjoyable and I could really drink this tea until it was finished out of enjoyment more than obligation. Here even more so than the TGY I got a lot more lingering flavor and returning sweetness. It makes me very curious to see what this clay will do with better and more complex sheng or other lighter fermented teas.

This afternoon felt like a good day for liu an and I thought it would be an interesting tea to try here. Given the broken and tippy nature of this tea and that it is only about 8 years old and had mild storage this is quite young and green by liu an standards- so this tea can still get quite unforgiving when brewed strong. Again the kobiwako brought more aroma to the cup, longer sweet aftertaste, and a very pleasant and more mild and nice sweet soup. It did also reveal some more 'fermented' flavors in the early rounds that something like zini might mute, but at the expense of also muting other things. Its interesting to see not only what it highlights but what it reveals about fermented teas. I'll try it eventually out of curiosity but I could see this clay being rather unforgiving for wet stored teas. Given the profile of what Hojo tends to sell this would come as no surprise. Like the Xiaguan I feel like this tea can be quite hard to control the astringency once you get into longer brewing times as the session goes on - the kobiwako really keeps this in check making the later long brews more complex and pleasant than they would otherwise be. More trials will say for sure but in both cases I do feel like this changes the cha qi quite a bit too in both these cases - happier stomach, more mellow and relaxing feeling from teas that can still feel a little over-invigorating or jumpy.

On the whole the Kobiwako with teas that it is favorable for remind me of good quality porcelain... only better! While I can see this clay would really shine for less oxidized and greener or white teas, I do think it also has a lot to offer to fermented tea drinkers too, but more on the raw than pile-fermented spectrum of things. I'm really happy and impressed to far and look forward to trying out a lot more teas in this clay. 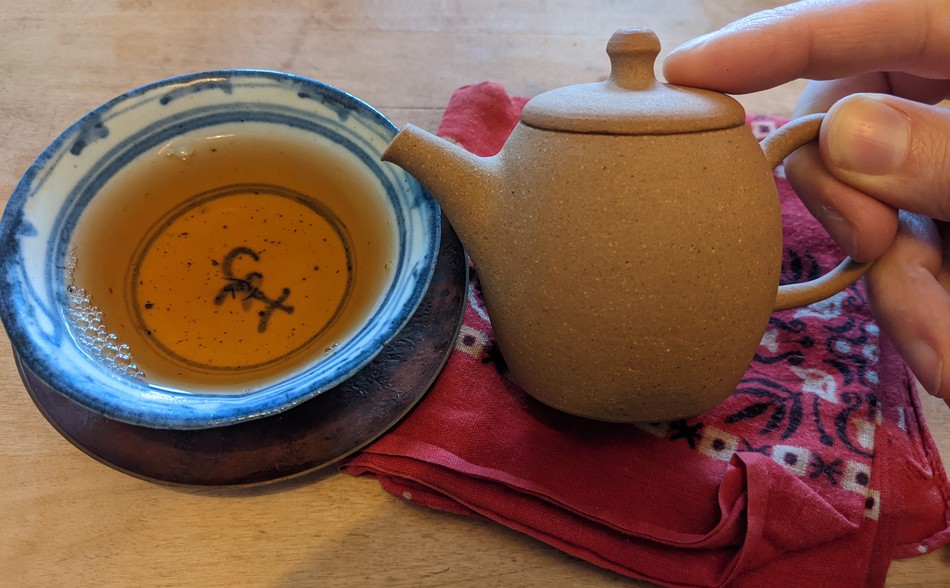 Wonderful review! Thanks for the effort noting all this down and sharing it with us! Interesting to me as I have literally Not tested any more g the teas you used with mine. Thanks!
Top

cheers @Bok - always happy to share findings like this. I think even when we say to others experiment and find out for yourself and trust your taste it is still really easy to fall in to assumptions about what clay works well with what. though as in at least once of the cases above we see this also often happens for a reason

I know you aren't much of a pu drinker but that when you are its good quality material - would be curious to hear what you think of the kobiwako with some sheng.
Top