Chris wrote: ↑
Fri Feb 19, 2021 8:51 pm
Those zhuni pots are beautiful! Is it a faux pas to ask approximately how much pots like this cost? ZAG is the only place I know of that seems to have comparable pots but I'm too nervous to email for a price.

You can safely assume that anything without a price shown is at least 1K. Zhuni like that probably at least 3-4K+
Top

Thanks, Bok! Not insignificant but not quite as bad as I had feared.
Top

Victoria wrote: ↑
Fri Feb 19, 2021 5:40 pm
.... I’d be interested if anyone has come across other clays that transform when heated in a similar way to Zhuni, but are softer and slightly thicker walled teapots?

Victoria I’ve come across this with all kinds of old clays, Zini/Zisha or different varieties and Hongni. It’s a general sign for good clay, no matter the thickness. At least all the pots that exhibit this have been great to use.

Good to know this reaction extends into some other antique Zisha clays like Zini, Hongni... Would be interesting to read published research regarding which properties in these clays, and firing techniques, induce these kind of transformations.
Top

TeaTotaling wrote: ↑
Fri Feb 19, 2021 8:54 am
It is charming, and a pleasure to use. I have considered selling it to make room for a larger pot. My size preferences have shifted toward larger pots. @125ml it's a little small for my tastes. A knowledgable friend has advised me against parting with it, due to the scarcity of quality antique pots, and Zhuni nonetheless. Brewing with it the past few days has certainly caused me to reconsider. Although, I'm not an avid collector. At this stage, I know 2-4 teapots I regularly use would best suit me. I'm not far above that mark, having only 7. I do have an 80ml, 60's Hongni if you are ever interested. It's another gem, but not frequently used. Be patient along your journey, there is no rush to the end, take extra time to enjoy the simplicity of drinking a warm cup of delicious tea.

TeaTotaling wrote: ↑
Fri Feb 19, 2021 8:54 am
Be patient along your journey, there is no rush to the end, take extra time to enjoy the simplicity of drinking a warm cup of delicious tea.

@thea_philosophia I sent you a PM. 60's Hongni seems to be a fun clay. Using it the past few days have really woken it up. I had not used it in a few months, until recently, and the clay has taken on a lovely dark amber glow. Another very noticeable color changing clay. Mysterious, intriguing, and so very pleasing. I love when this happens. I brewed up ~6 grams of Shan Li Xi Winter Sprout this morning, and it was delicious. I am familiar with this tea, but typically opt for a gaiwan. The flavors coming through out of the Hongni were superb. It was so sweet and smooth with a distinct cotton candy flavor that I have not experienced this strongly before. I'm always amazed at how comfortable ~6 grams fits in this little 80ml. The round shape begs for tasty rolled Oolongs. I see why 60's Hongni is so desirable.
Last edited by TeaTotaling on Sun Feb 21, 2021 12:59 am, edited 1 time in total.
Top

TeaTotaling wrote: ↑
Fri Feb 19, 2021 8:54 am
Be patient along your journey, there is no rush to the end, take extra time to enjoy the simplicity of drinking a warm cup of delicious tea.

Not that I can see! Although, I am beginning to see the light!! A certain large pot was clouding my vision. You were right, these old pots are magical. Bigger pots don't necessarily equate to better sessions. Variety is spicy, and I like it hot. Let the tea flow, and the good times roll!!! Cheers!!!
Top

Wasn't sure where else to put this but... lets try here. I grabbed these cheap jars which I am guessing were slip cast. very rough and cheaply produced as you can see the extra clay and even the fingerprints on the inside

gave them a boil and now they're soaking in some boiled shu, though I'll probably just use them for storing small foil packs. the lid fit is very loose and apparently the previous owner used them to store sencha which seems like a truly horrible idea. while they are nothing fancy the thing I'm curious about if anyone knows more about is the 'made in china' mark. its so generic its probably hard to say anything - on porcelain you at least usually have coloration or print quality or additional symbols to go by. but I've seen other pots, and particularly bigger zisha kettles, that also have only this mark with no other factory or maker marking or identification, all with quite a wide variety of time period claims. if this persons memory is accurate these are probably from at least the late 90s but maybe older. was there specific or various periods where there would be no factory marks or other stamps other than this on various clay wares, or where the size/font of stamps changed? I would assume it would all have been well after any of the 'factory' eras, though I have seen earlier claimed pots with these marks - were there other factories producing lower-quality wares using cheap slip casting like this, or that lower grade export ware like these just wouldn't be marked beyond the stamp since theres no real handwork anyway? I know that the state factories also produced other clay ware like more elaborate jars/containers, plant pots, ash trays, display objects, so on, though older ones I've seen all still have stickers, but they are obviously much higher quality.

Given their weight and that Europe has plenty of ability to produce cheap generic terra cotta for things like jars its a funny thing to have bothered importing/shipping, especially since these are so incredibly nondescript and un-stylized (ie no terrible dragon transfer print or "oriental" looking shape/deco to make it a cheap home curiosity), though I'm not sure at what point things like protectionist 'anti-dumping' taxes would have come in to place- maybe that is more recent though. just an curiosity. 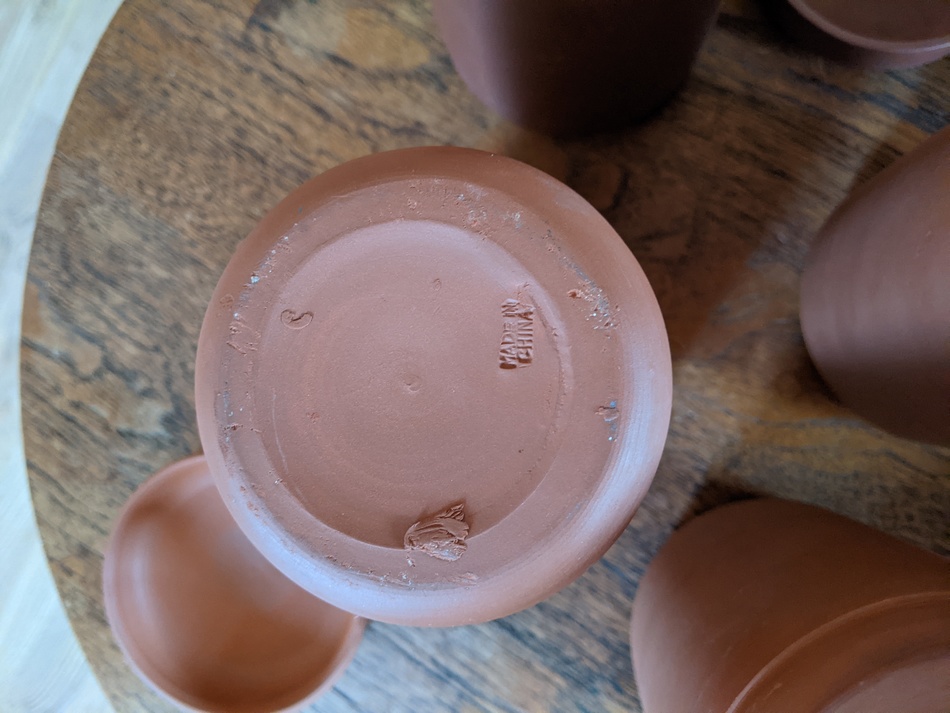 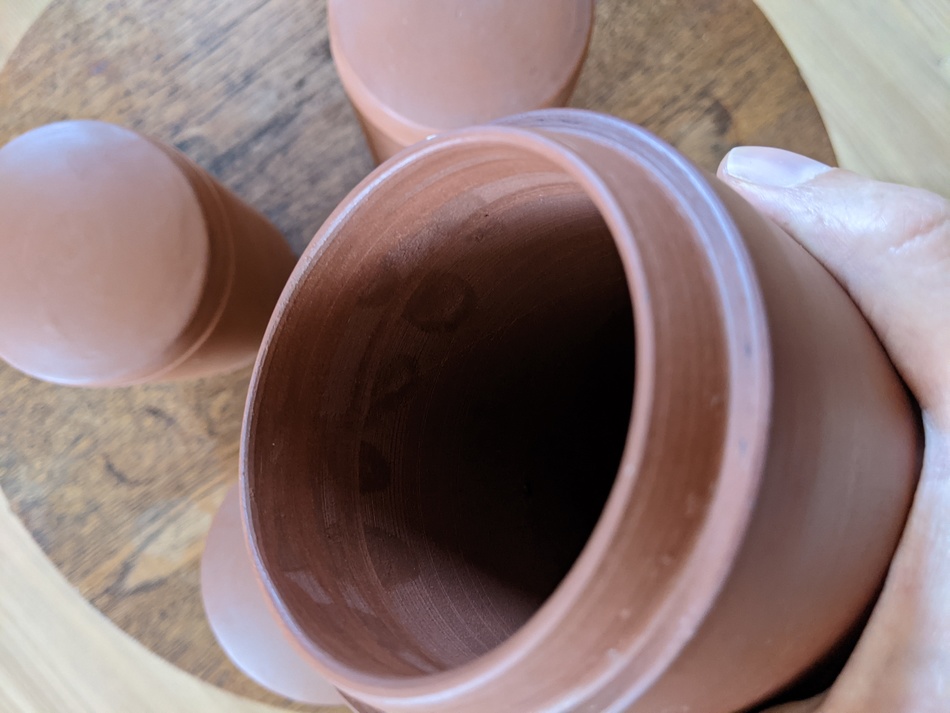