What Herbal Are You Drinking

debunix wrote: ↑
Sun Apr 04, 2021 2:44 pm
Beautiful. The blend is interesting: I’m trying to imagine the taste and thinking of rose water added to cinnamon in a rice pudding: if the floral and spice are delicately handled, should be as fine a taste as it is a fine vision.

I think I should have added 1 less slice of ginger. The ginger was slightly overpowering the other components as steeps progressed. But overall it was nice!
Top

I’ve been boiling a lot of ginger root and mixing the extract with some dried mint leaves, and sometimes adding a splash of lemon or blood orange. Ginger very quickly settles the stomach from nausea. Day two, I ran out of fresh mint leaves that I dried from my local farmers market, so I grabbed organic peppermint tea bags from Germany that I happen to have. Smelled pretty good, 1st steep tasted ok, but a real problem is the amount of tea dust coming through the teabag because the particles are so fine. Seriously, can’t remember ever seeing so much dust, except when matcha is mixed in with sencha in some of O-cha’s and Kagoshima Seicha’s high quality sencha teabags that are nice for grab-and-go. In the future I’ll be more careful -when and if- I get herbal teas in bags, that dust is spent after one dunk, and then is just like dead dust.
Top

Wow, I just steeped some Hydrangea leaf that @debunix recommended. I couldn’t remember why it was recommended, but was curious so got some. The dark twisted leaf looks nice, and they have a subtle pleasant aroma. On the canister steeping recommendation is .5g/12-15oz (340-425ml)/200f/3-4 minutes. I though hmm must be a typo, so I used 1.2g/140ml/200f/3.5 minutes

this is super sweet! Added at least 300ml of water, and it’s pretty tasty now, and I remember why debunix recommended this tisane - because it can be used as a sugar substitute with other roots and herbs. This is probably the best alternative sweetener I’ve tried. Now I’m curious what persimmon leaf and mulberry leaf taste like from the same Korean company, Hankook Tea Store.
Top 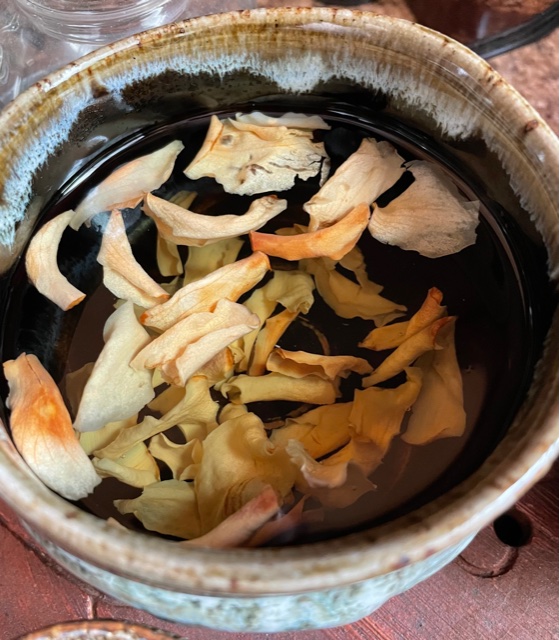 I tried a couple of commercial blend compressed bars of tisanes from Moychay recently. I'll not mention more about the details or the post here (in Tea in the Ancient World), since part of the idea of mentioning this here instead of the blogger corner is to pass on that.

To me it's an interesting theme and form. Of course there is no extra function in pressing those, beyond making them easier to store, easier to measure out, and looking catchy (probably the main thing). Some of the blends I've tried before have been really good and others just kind of so-so, and one of these I liked more than the other. One was made on a cherry theme, which sounds good, but it ended up a bit tart, and the other was more complex, with warmer undertones. I Gongfu brewed them, which may not be ideal, but I'm so on that page that it's now a default. It was cool seeing how the different herbs transitioned, but only one of two versions actually did (the Romantic version versus Cherry Sea).

The last part I didn't get to, or never really get to, is evaluating if these are really healthy or not, if the combinations draw on any traditional practices to use herbs as a dietary input. I suppose even if that's true it's more a concern if that actually works. I may look into that, since Moychay mentioned that a trained herbalist designed at least one of these. I'm not that concerned, it's just one more thing to consider and possibly look into, since wasting time is one goal of my tea habit.

Another one that looked interesting (a vendor sent a half dozen for me to try and review, based in part on helping them with some editing work) was a mix of Da Hong Pao and willow herb (aka fireweed / Ivan chay). Then that's only half tisane, but that might be nice. I have no problems with caffeine but I do sometimes drink tea mixed with tisanes if I'm having it later in the day, cutting an inexpensive sheng version with some chrysanthemum or something such, usually to drink grandpa style while driving somewhere.
Last edited by Victoria on Fri Aug 13, 2021 1:29 am, edited 1 time in total.
Reason: Mod edit: cleaned up image link
Top
Post Reply
50 posts