Victoria wrote: ↑
Sun Feb 28, 2021 2:54 pm
Curious, where you hope to take all this research you are doing ? - since your focus seems to be primarily the history of company adds, advertising, and branding.

........
One reason I focus so much on ads, I think, is that they are sort of the elephant in the room with tea discourse. Online tea-culture is riddled with guerilla marketing for tea vendors, but nobody ever seems to outright just talk about the history and influence of advertising on tea. Sometimes just being aware helps put things into context.

It also helps moderate what I guess is another big trend which is national romanticism in tea. People strongly seem to desire a non-globalized tea past, but tea is the original globalized product, whether Brits and Americans trading Mexican reals for mystery teas in Canton during the 19th century or Japanese corporations developing new Taiwanese oolong styles to take on the Brits in a battle over the American market in the early 20th, or Nestle promoting Nestea in Hong Kong using commercials and the nationalized CNNP producing its own instant "lemon tea" to compete with it in the 1980s, and then lemon tea becoming a thing in Hong Kong sitting right next to the ancient pu'er and the high-fire oolongs. Not to spoil anyone's fun, but rather so that they do not become blindsided by the gaps in their understanding. (This isn't just a Chinese tea thing -- mention a Teasmade to a tea-and-crumpets Anglophile and they likely either will not know about it or be offended that it exists, even though quite a lot of British tea was made using just such devices.)
......

Thank you for your thoughtful reply mbanu, it covers a lot of territory and history. A big package to unwrap. A few stream of conscious thoughts in reply;

Some of your previous posts for me reference nicely the coming together of emerging mass production, western commerce, and art in the modern world of product design. As in early 20th c American company’s like Hall China’s collaboration with well regarded ceramicist’s Eva Zeisel, and British 19th c companies collaboration with influential British designers like Christopher Dresser. The coming together of commerce, mechanized mass production, and industrial design during the 19th and early 20th c is a uniquely western manifestation. Revolutionary.

I would be interested to see some examples of what you refer to as “guerrilla marketing for tea vendors”. Guerrilla marketing can be super interesting, like taking art into the streets, as in Malraux’s ‘museum without walls’ concept. Although, I think the term was popularized in the 80’s in the world of advertising.

Your interest to “talk about the history and influence of advertising on tea” could reach back thousands of years, yet I see you are primarily focused on print advertisements, product naming and their cultural references. Wondering if that is a correct observation, that you are primarily interested in modern advertising and it’s influence? Curious, because since the beginning of the exchange of goods and trading some form or another of sales and advertising was employed; early on by word of mouth; then inscriptions on clay and stone in Babylonia; the early use of art and architecture employed as a form of marketing for pharos, emperors, kings, religious entities; 9th c block printing and 13th c paper packaging in China; later with the 15th c invention of the printing press the flood gates where opened into what we now know as modern print advertising. In other words, the focus of historical influences could be very broad, but seems intentionally focused on the 19th-20th c. advertisements, naming, and branding.

Finally, your comment that tea historically is one of the great globalizers, yet we tend to romanticize localized sourcing - “another big trend ... is national romanticism in tea. People strongly seem to desire a non-globalized tea past, but tea is the original globalized product”. This global/local duality I think could be applied to other historically traded commodities that were also romanticized like salt, sugar, spices, down to Turkish cigarettes sold as Camel’s.

Anyway, thank you for your reply.

Fascinating historical contextualization Victoria. 'Revolutionary' indeed! Successes of modern industrial design have delivered unprecedented availability of countless necessities and conveniences. But of course dehumanized working conditions and environmental castastrophy have been among the cost.

The global/local interplay unfolds in every human endeavor. No sooner has some uniquely local musical, sculptural, architectural, culinary, recreational, or any other human activity been discovered than it is publicized, celebrated, internationalized, commodified, mass produced, and often, banalized. Is one, universal, generic, culture inevitable? My money is on continued uniqueness of only those things in scarce physical supply or with prohibitive labor cost.

Advertising and marketing seen in the history of tea (and everything else) is interesting because it combines text- and image- based materials to great effect. This in contrast to religion (except Catholicism, Buddhism, and Hinduism), academia, and (pre-television) journalism which as a rule tended to elevate importance of printed word over visual image. With the advent of television and internet, dust has yet to settle on this competition between preferred communication styles, but safe to say it isn't looking good for text-based abstraction!
Top

mbanu wrote: ↑
Sun Feb 28, 2021 1:26 pm
I think maybe there is even a good argument that "Russian Caravan" was what "English Breakfast" would have been called in England!

Part of what makes me think this is that some well-known British versions focused mainly on the Keemun content of the tea, such as Twinings. This seemed to cause a bit of confusion and frustration among American tea-drinkers when they started to become interested in loose-leaf tea during the 1980s revival. Kenneth Anderson described Russian Caravan this way in his 1982 book, The Pocket Guide to Coffee and Teas:


Russian Caravan. A combination of black tea that varies according to the dealer who packages it. One Russian Caravan Tea contains northern China congou and Formosa oolong, reportedly blended for the Russian aristocracy in a period before Formosa produced oolong tea. Another Russian Caravan formula consists of 60 percent Keemun, 30 percent Darjeeling, and the remainder a mixture of oolong and Flowery Pekoe.

...so no Lapsang Souchong. 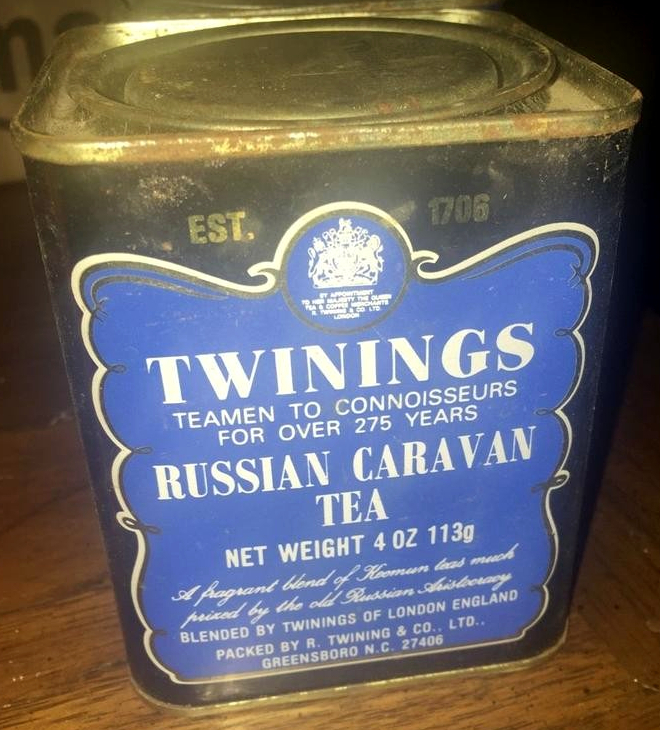 I'm tasting side by side an early 70s Twinings Russian Caravan and a late 70s Twinings China Black.
There is no information on the Russian Caravan tin about what tea went into it, but the 80's version of it shared by @mbanu says it is Keemun based. Definitely no Lapsang Souchong and no silver tips detected in the mix. There might, or might not, be some small amount of oolong, perhaps a Formosa oolong, which was another classic Twinings offering.
Not sure if any Darjeeling was put there -- the basic Twinings Darjeeling of this era was processed as a fully oxidized black tea of BOP grade, with very little or no muscatel flavor left after 50 years of aging, so visual inspection and tasting don't tell much.
The China Black Tea is described as a "special blend of Keemun and other China mainland black teas".
Tastewise, both teas are very similar, and i'm not sure i'd be able to tell them apart in a blind tasting. The taste is mellow and full-bodied with little to no astringency, and envelops mouth with a sweet aroma the way a good chinese hongcha should. It handles well several infusions, but the first steep is particularly nice with some aged flavor and a hint of pleasant sourness.
While not extraordinary, these are very decent blends that can beat many of the single origin boutique hongchas i've had in the recent times. 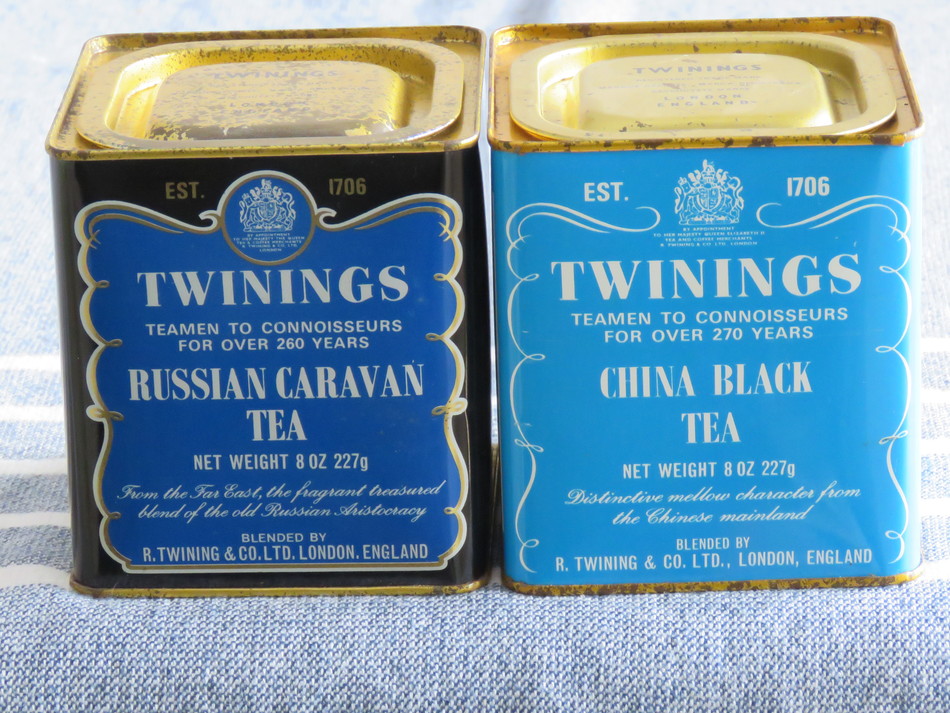 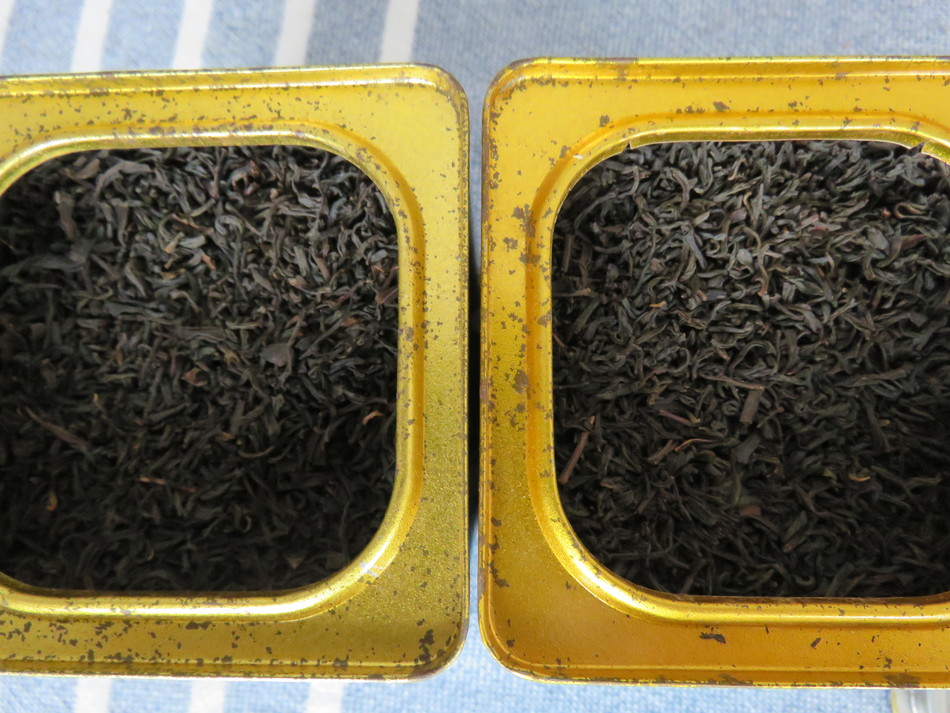 Sadly… since the 70s a lot has changed and last I checked Twinings is a mere pale shadow of its former self.

they also look the same. do you think someone could have refilled them with the same tea at some point? lol
Top

True... but I guess the tea market and the labor and production means changed quite a bit too since the 70s, both for better and worse.
I've got also a can of a Twinings Formosa Oolong from that period, about which I should post next, which is rather underwhelming, and a tarry Lapsang Souchong which haven't mellowed out a single bit.

pedant wrote: ↑
Wed Jan 25, 2023 8:02 pm
they also look the same. do you think someone could have refilled them with the same tea at some point? lol

No, they were still sealed in the original cellophane when I got them. Given the price (quite a bit below that of a fresh Twinings), and that they contain tea of some age, it would be highly unlikely.
My take is that the base material is the "same" Keemun tea, and whatever different expressions the two blends originally had was largely erased by time. There are actually some small differences under close inspection, like the RC contains a few scattered yellow flakes (which could potentially come from a Formosa Oolong).
Top
Post Reply
20 posts