Drinking a cold brew pressed white tea from Bitterleaf, the White Crow Shou mei from last year. Last year I got a sample of this tea and loved it so much I bought three cakes (I’ve never bought more than one cake of anything before, so that should speak to my opinion on this tea).

I dumped ten grams Into a 25oz glass container and let it steep overnight. It came out really good, I don’t get the full nuance of flavor, but the thick creamy mouthfeel makes up for that, it is much thicker than it is when I brew it hot. It’s hard to describe the flavor of this tea, it isn’t like any I’ve tried before, it has the flowery higher notes that I associate with white tea, but the depth of flavor and the big body that I associate with a black tea.

I think next time I try this I’m going to shock it with a couple seconds of boiling water then immediately pour the cold water on top, I think that might release more of the flavors.
Top

I think next time I try this I’m going to shock it with a couple seconds of boiling water then immediately pour the cold water on top, I think that might release more of the flavors.

That's interesting to read. As you wrote, white tea is known to be light-bodied. In fact when I prepare mine, I am ready for lots of flavor without deep....
Look forward to the results of your giving the leaves a couple seconds of boiling water. Congratulations on going for the 3 cakes. I often wonder about the admiration for a tea written about followed by a comment that the next time that that person orders from the vendor who sold the tea to him, he will buy another sample! (Tea so good one will buy another sample, wow!) Cheers
Top

Ethan Kurland wrote: ↑
Sat Oct 19, 2019 5:28 pm
That's interesting to read. As you wrote, white tea is known to be light-bodied. In fact when I prepare mine, I am ready for lots of flavor without deep....

This feature of the tea right here was why I ended up buying three cakes, almost on the spot, when I tasted it. My personal preferences tend toward the lower registry notes, so white tea has never been very satisfying for me. Like the flavor is there, but it’s missing its soul or something.

Interestingly, Yunnan Sourcing sells some pressed white tea that has been aged for a few years, and they claim that as it ages, it picks up more characteristics of black tea. Having drunk a pressed white, I can easily see how that would be true, and I really look forward to seeing how this tea develops in the next few years.
Top

This is definitely not the only white tea I would label as 'spicy'. Hints of cinnamon, mace, clove, pepper are what I usually think of as 'spicy'.
Top

Same Fuding Bai Mu Dan from YS today....not noting the spice as much today as the fruity and floral and slightly astringent notes.
Top

Drinking some Red Peony from Floating Leaves Tea today. I ordered this with samples from one of their tastings earlier this year, and just opened the package for the first time. The leaves are large and lovely and twisty, and the with enough leaf to fill my gaiwan about 1/2 full when they are fully hydrated, the resultant liquor is interesting, but feels light in body. I am not sure if I am using appropriate brewing parameters or not; but none are suggested on the website (there is a link to an audio podcast, however, but no grams of leaf/mL water/water temp/time infused guidance in writing).

I will have to listen to the podcast and try again. I feel like there is potential for something brilliant here but I am just not infusing right to bring it out.
Top

When I’m working and distracted I enjoy taking Darjeeling breaks. Today I’m sipping on Thunderbolt’s 2019 Castleton Moonlight, 1st flush white. It’s aromatic, with a complex creamy, nutty and sweet profile. Lots of hairy silver tips. It is second tier to their AAA Castleton Moonlight Imperial 1st flush white, but really excellent as well, and since it won’t break the bank can be enjoyed more casually. A treat

Just got my order from Bitterleaf that I ordered a month ago. Coronavirus delayed delivery a bit but it’s here now!

I got another one of their white tea cakes after having been pleased with their White Crow offering of last year.

This year I got their Skinny Dip tea and it is fabulous. The leaves are fairly small, and the cake is very loosely compressed, which is making me very happy. It’s so easy to chip off tea. I steeped it at 190F for 8 seconds for the first steep. It has an unusual flavor that I’m really loving. Up front it has that orchid flavor a good white tea has, then I get something faintly reminiscent of sheng puerh. That “I’m busy aging come back later” sensation that is what I think of as almost musty for lack of a better word. Mingled with the “musty” flavor is a flavor reminiscent of green tea, like a dragonwell but less nutty. That fresh early spring flavor. In later steeps the orchids diminish and the green tea flavor takes over.
Top

Currently drinking a 2019 White from Viet-Tea (teaofvietnam on IG). Fruity and sharp - definitely one I want to stock up on! 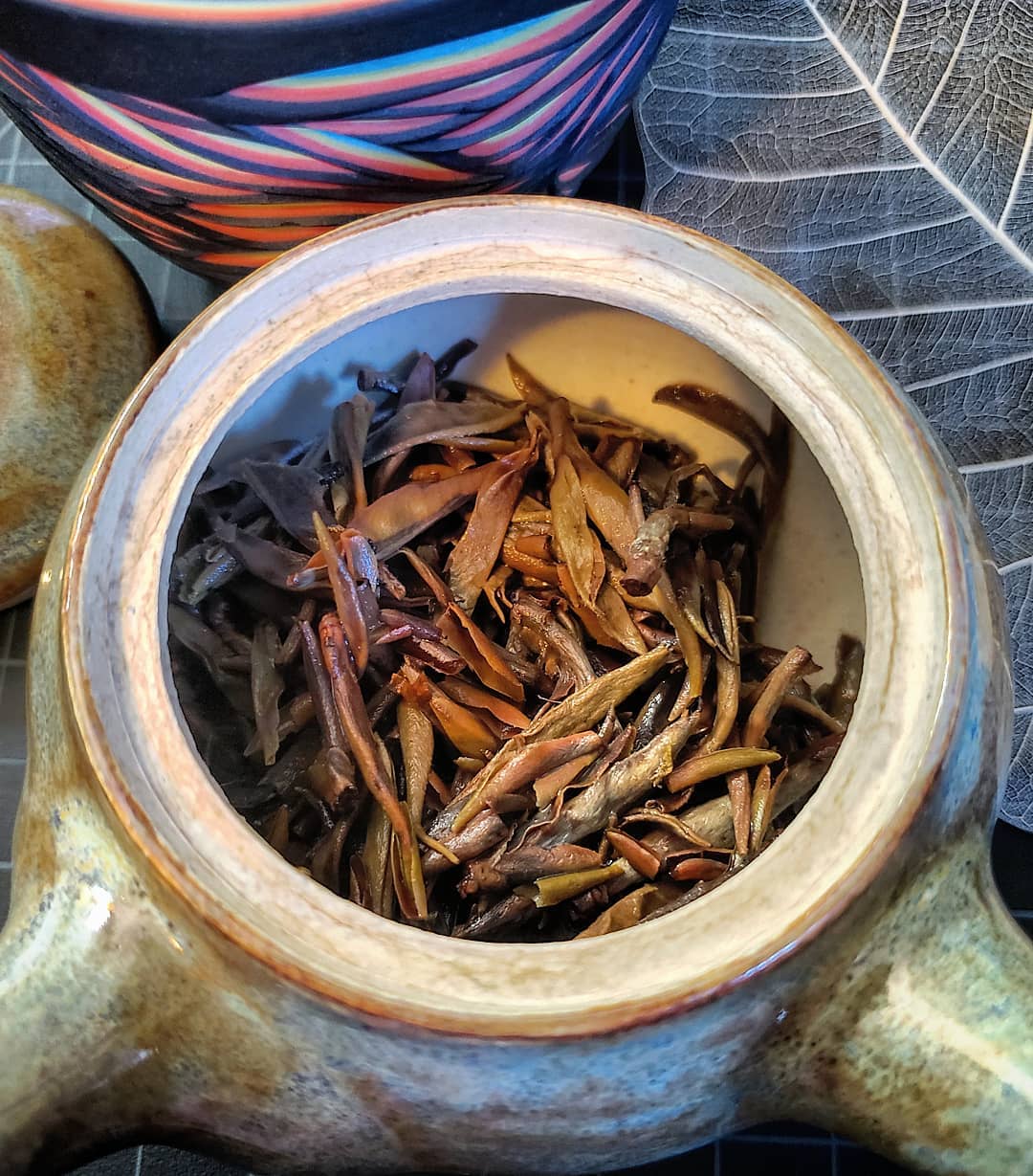 Any details on what kind of white it is? Curious.
Top

A comparison of 2 white teas:

The first session with this tea, I ignored the vendor's suggestion & steeped the beautiful looking flat leaves for about a minute. The tea tasted like sugar water. Aftertaste was a most pleasant array of flavors telling me that I had been stupid, that my mouth would be full of an array of wonderful tastes, if I had followed the advice. Subsequent infusions of 10 minutes did not strengthen the flavor. The tea was largely a tease.

The second session was delicious in a dynamic way, though the disappointment of the tea being overly light beyond the delicate character of white tea that gives it a signature character, remained. Again, almost all of the flavor was not sensed immediately, only in the aftertaste. The 10-minute 96C first infusion was bolder in its presentation of flavors, but still too weak for me. With the leaves being given the suggested steeping, subsequent infusions were not worth drinking.

Thus, this tea is good for one impressive infusion. Too light for me but definitely tasty & perhaps it is fair to say this a classical white tea of fairly high quality. No bitterness.

2. SNOWBUDS from me via Nepal: The leaves are a bit curly & look like my Oriental Beauty except they have a lot of green color & almost no brown color. Dry they offer no aroma. Surprisingly, 10 seconds after pouring 96C water over the leaves into the porcelain teapot, there was no aroma. 10 seconds after that, I smelled the lid of the teapot, & that is where the aroma was. The same aroma of many Nepali & Darjeeling teas, was so pleasant in my nose. However, drinking the tea's first infusion, the flavor came mostly 5 - 10 seconds after I had swallowed. (steeping time of the 1st round was about 20 seconds). The 2nd infusion was steeped for about 2 minutes which made the brew a bit too strange for me, giving bold flavor with light body. To cut to the chase, experimenting suggests that one should start with steeping times of around 30 seconds & that one might enjoy the light, delicate character of white tea for the 1st & 2nd infusions because the next few rounds won't be so subtle.

This tea definitely brings flavors of Nepali tea that those of us who drink Nepali black tea will recognize. It is definitely white tea since it feels gentle & if not brewed too long remains free of harshness even for several rounds. Like most Nepali teas, this will taste similar to good Darjeeling but without the muscadel flavor.

I am happy with this tea. It is likely that I will infuse rounds for 20 seconds because if I know that the flavor will build up in my mouth & be stronger as the leaves change, I can enjoy the subtleness of early rounds. (Some tea rewards afficiounados for learning to appreciate the "process" of a "developing" session, or the "progression" of a session & its ultimate results...?)
Top

I have prepared this tea a few times after the time that I wrote about above. In a wide porcelain bowl, aroma came up from the leaves as hot water hit them which was delightful. However, the best brewing comes from a teapot with a lid; so, I must sniff the lid of that pot to enjoy such aroma. This tea is very flavorful yet so light in body which I think is a major attraction of white tea. Quick steeping (less than 30 seconds) produces what I like best, flavors that one wants from true top-quality teas from Nepal & Darjeeling without punch-in-the face boldness. That edge to the flavor will present itself after 3 infusions even if one keeps steeping time as short as 20 seconds (which I find is my favorite way). Many people will like this strength (as I used to do when I drank the black Himalayan Orange that I obtained for myself & to sell from Jun Chiyabari years back);so, they can steep longer and/or continue to use the leaves for a few more infusions.

Spending a lot of time alone in my room during this crisis, I can focus on a fairly long (about 15 minutes) aftertaste that lingers so pleasantly in my mouth after a session of Snowbuds of 3 rounds. Moreover, there is a bit of a body feel that I enjoy & have not experienced from tea for quite a while. It is definitely not a caffeine high, a mild cha-qi that is good for the body & soul.

Quite an excellent tea except for those who don't like the array of flavors that come from Himalayan tea. (This white does not feature muscadel as I mentioned in previous review.)

BAI MU DAN from China (Palai du Thes): My sister has prepared this 2 X since I drank it with her. She tripled the amount of leaves & prepared 2 infusions with them, steeping for 10 minutes each time. This time the flavor was stronger & very much to her liking.
Top
Post Reply
128 posts