I reviewed a Japanese fermented tea recently that was almost certainly goishi cha; I was just curious how that experience compares to other versions of the same thing. The review is here:

One odd part was that tea being presented as pyramid tea bags. The owner of a local Bangkok shop gave it to me, so I never did hear a full background on it, or why it was in those. His input was that it was closest to sheng but from Japan, and definitely not sheng.

When I tried it in the shop it tasted a bit like seaweed, with a strong umami flavor range. Trying it again at home it went through a phase sort of like that after two infusions but initially it was a bit sour. Then after that range, later, the sourness, umami, and that vegetal range cleared up and it picked up some citrus. Across the different rounds a base flavor was well-cured hay along with a root spice range, not so far off ginseng, with underlying mineral mild enough to be hard to sort out from the rest.

Bitterness wasn't notable but as with the other flavors at one point in the cycle it stood out more than the rest of the time. Feel started out a little dry but cleaned up beyond that, not as thick and rich as some other types of teas are but not thin.

It made for an interesting experience. A comment about the post, from a friend / contact with a fair amount of background, said it sounded like a good version of goishi cha to him, but since I've not tried that before I'd have no idea. Judging it in relation to other hei cha and sheng that sourness could really be a deal-breaker for some, but it faded fast in the cycle, and by the third infusion wasn't a primary flavor.
Top

interesting find. i'm surprised to see it in teabags.

i've only tried one from TdJ (a thread is here):

it doesn't remind me of puerh at all but is rather special in its own right. lactofermentation provides appreciable tartness. the aroma is sweet, very fruity, malty, and somehow savory as well. i've seen it described as camphoric, but i didn't pick that up personally.

it's pressed and chopped into little squares. this is where the 'go stone' name comes from. 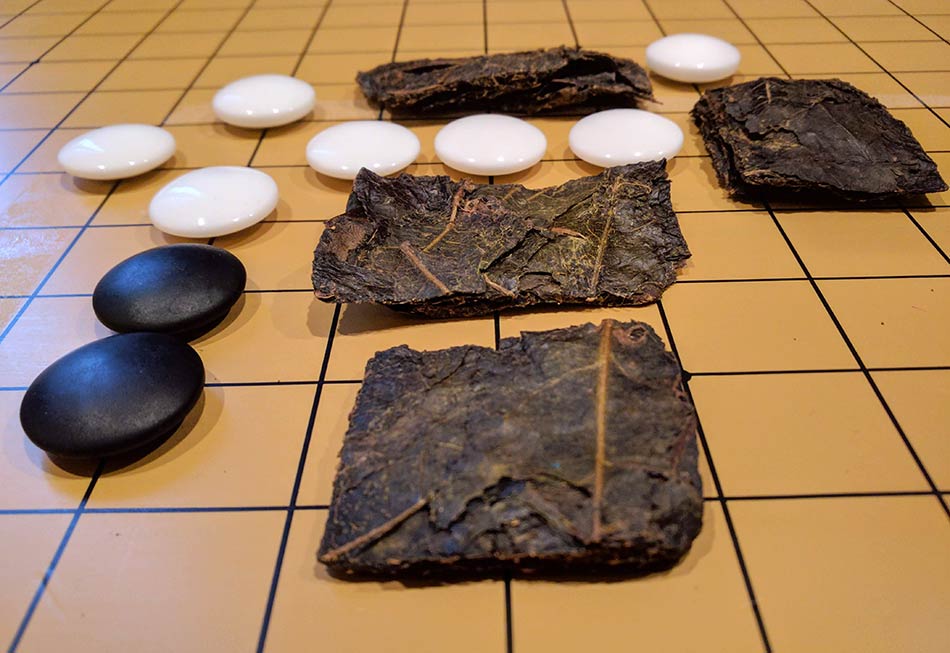 if it had appreciable lacto tartness that eluted considerably after a couple of steeps, i would guess it really was goishicha.
Top

@John_B: Everything you describe sounds like goishi cha to me. It is exactly the taste and impression I remind of when I tried it.
And same as @pedant, I only have tried it outside of teabags, pressed leaves, cut in small square/rectangle thin pieces. It was not from TdJ but received from a friend.
Top

Interesting! That thread was good background; I'd missed that. It didn't necessarily seem tart to me but it did seem slightly sour with a bit of bitterness at one stage, and I may have missed that as a reasonable interpretation. Black teas of different types can be tart but that's a bit atypical as flavor range goes (just not as much as sourness), so it could be easy to miss, especially paired with sourness.

It probably will come across differently freed from the tea bag, more properly brewed Gongfu style, as mentioned in the last comment on that thread.

The most interesting part was how it really went through three distinct phases, sour and a bit odd for the first 2-3 infusions, then onto much less sourness but more into umami, and potentially interpreted as like seaweed flavor range for flavor at that stage, then sweeter and onto fruit flavor after 5 or 6 infusions.