I find these FT productions to be a bit more enjoyable than regular versions which I also throughly enjoy. Smoother and more resinous.

I read somewhere that the FT productions typically would use better materials. Not sure if this is true across the board. Anyone know?
Top

Chadrinkincat wrote: ↑
Sun Dec 19, 2021 3:58 pm
I’m enjoying another session with the 2004 XG FT 8653 3+1 from The Jade Leaf. This has become a favorite of mine for daily drinking which is why this cake is almost gone. My ROC zini pot really brings out the pine resin notes.

The 2004 XG FT 8653 3+1 is a real stuff. Very rich, aftertaste is long and comfortable. The floral honey with wet forrest notes are very tasty. Thanks for bringing me in again. 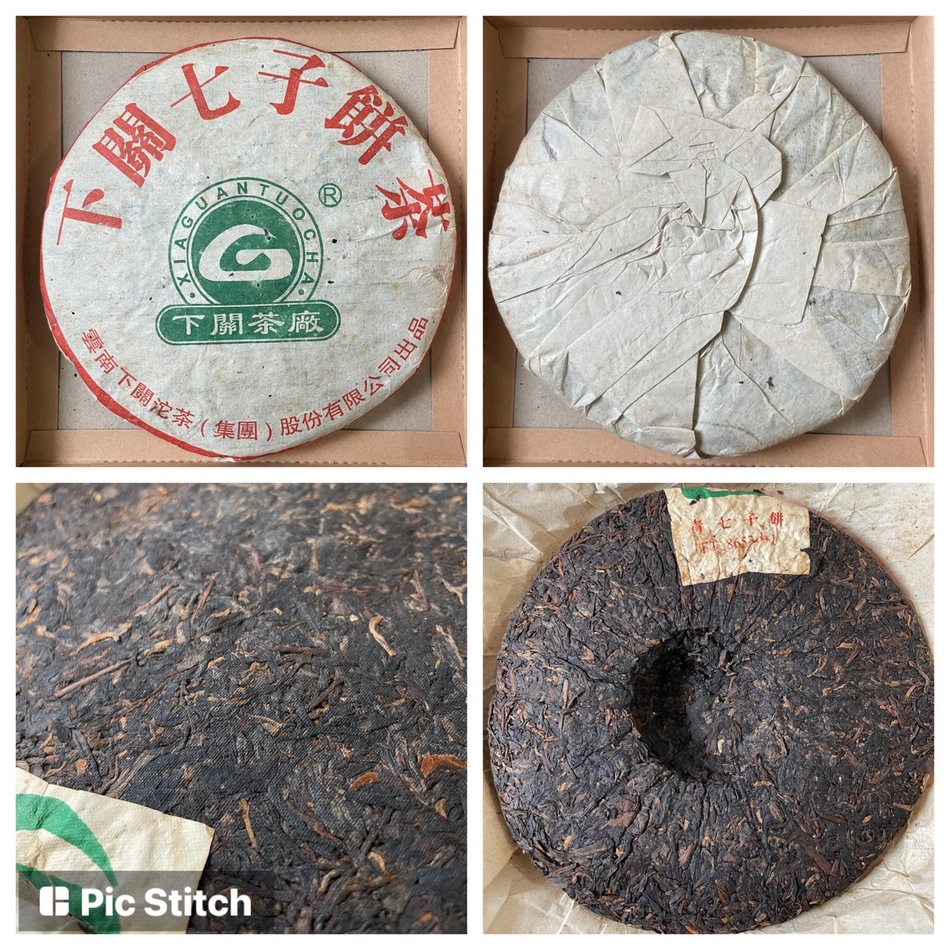 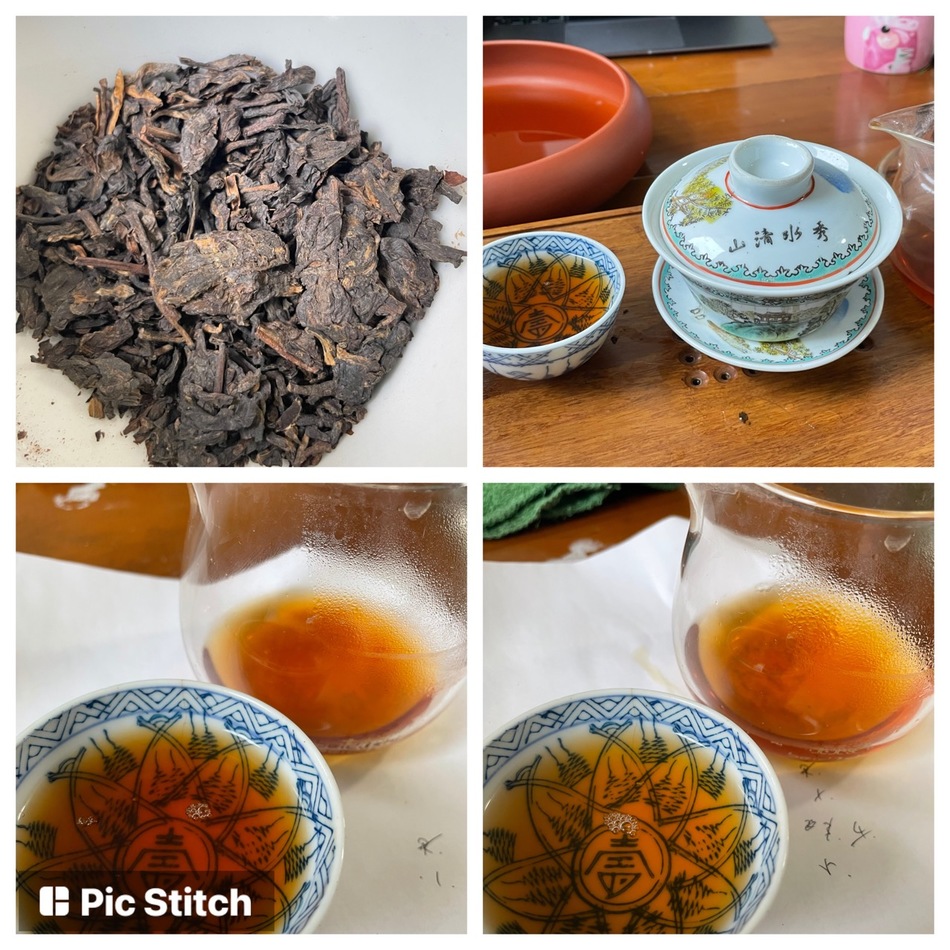 
I find these FT productions to be a bit more enjoyable than regular versions which I also throughly enjoy. Smoother and more resinous.

I read somewhere that the FT productions typically would use better materials. Not sure if this is true across the board. Anyone know?

Looking good @yinyautong - I've also been lusting after more T8653 as I ran out of my last 2005 cake quite a while ago. It definitely has a signature taste. I'm comparing some 2006 and 2012 Xiaguan Yushang Gongtuo today. The 2012 stuff is still leather and artichoke, but has a very good energy and the 2006 is much sweeter. 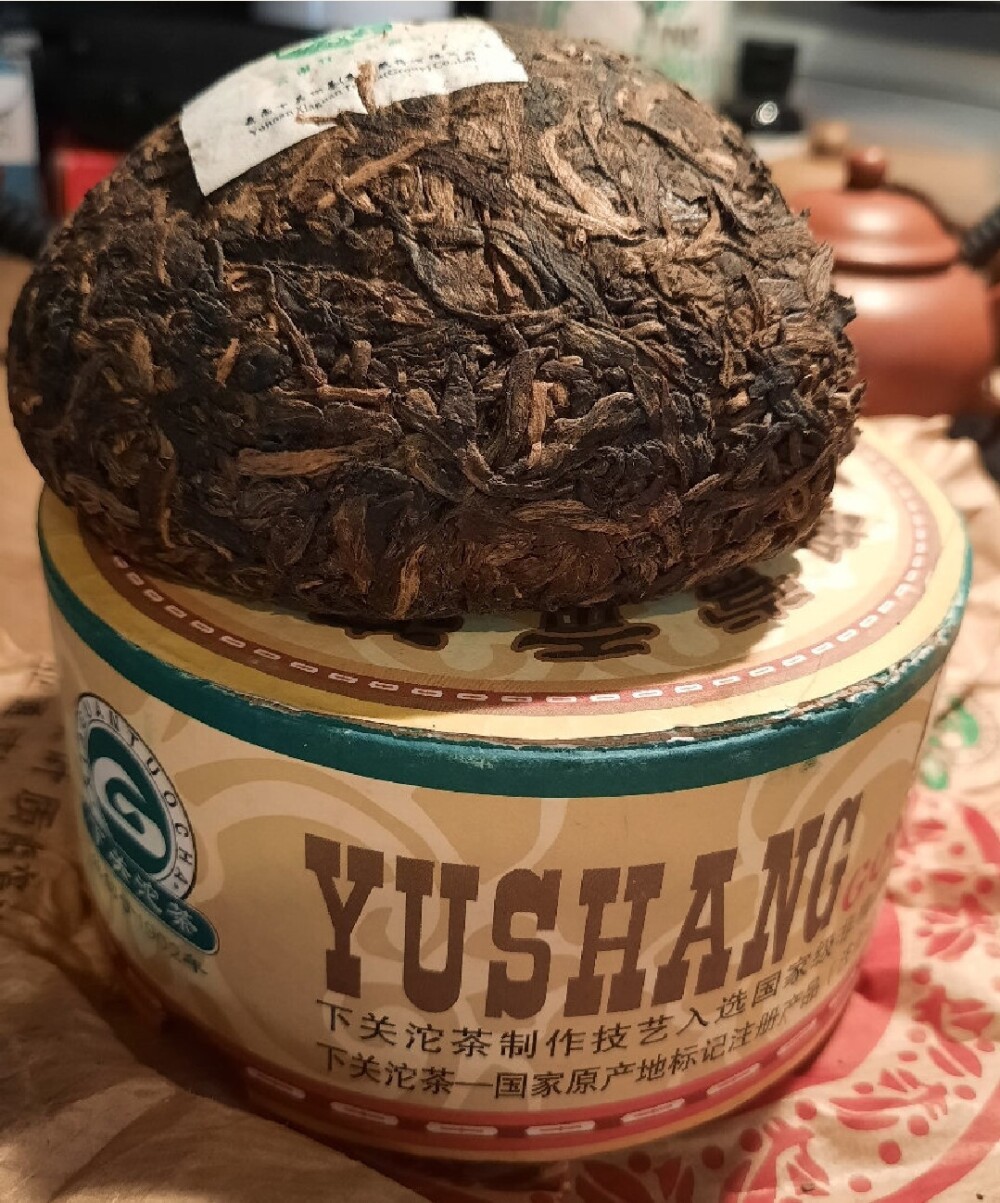 I got one cake and one brick from a US vendor to check out and see if I would want to pick up more of either... I've never had tea directly from HCT and as far as I know they don't ship international (if anyone knows how to get a hold of some though, I'd be interested to hear...), but from what I've been told yes theirs is a more traditional wet HK style storage. Neither tea has a super strong smell or flavor I associate with HK tea, so I think these have been stored here in the US, probably in far less than ideal condition for quite some time since I doubt the couple weeks sitting here wrapped up but in a dry house before my arrival managed all of that. That said, not necessarily a total waste since it means any real strong wet storage notes are gone, and hopefully sticking these in with the rest of my cakes for a bit and then waking them up should yield some much more mellowed but nice tea - I was hoping for something with a stronger HK profile, but it just means it is something else now. Can't give super detailed tasting notes since I'm not using my typical pots and the water here is pretty different, but so far nothing out of the ordinary on either the 7581 type brick or the cake- both broke chunks off very easily so I get the sense they did see their wet storage at some point, though the leaves on both seemed kinda dried out now. The cake had more camphor/minty notes to it, brewed up very dark. The spent leaves below are from the cake - I'm not great at identifying traditional storage from lighter fermented shu, but while there are some lighter leaves in there I'm leaning towards this probably actually just being a ripe cake rather than something blended. 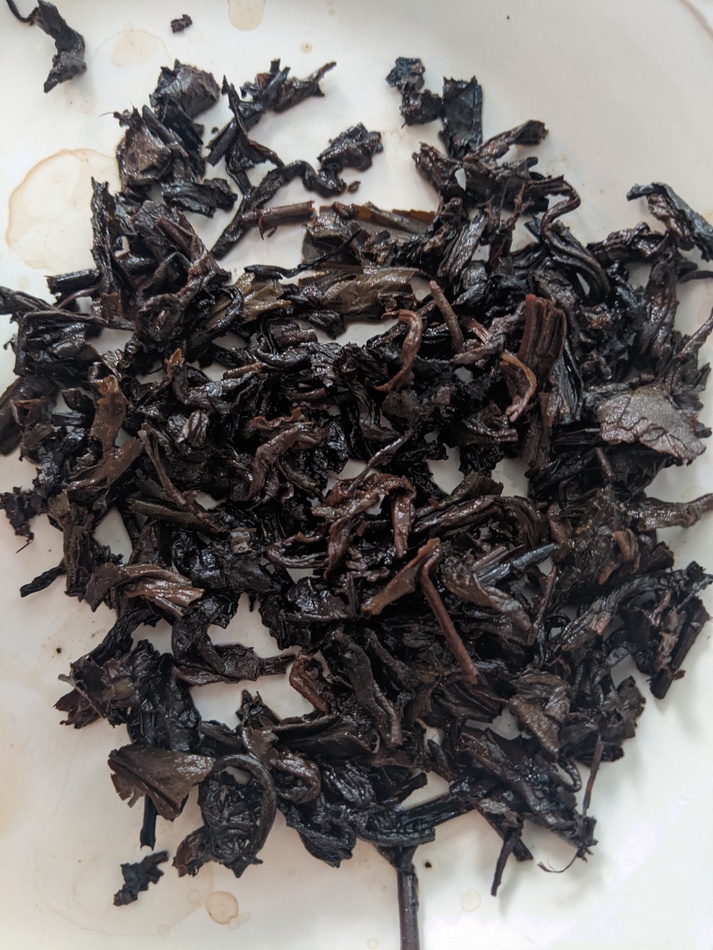 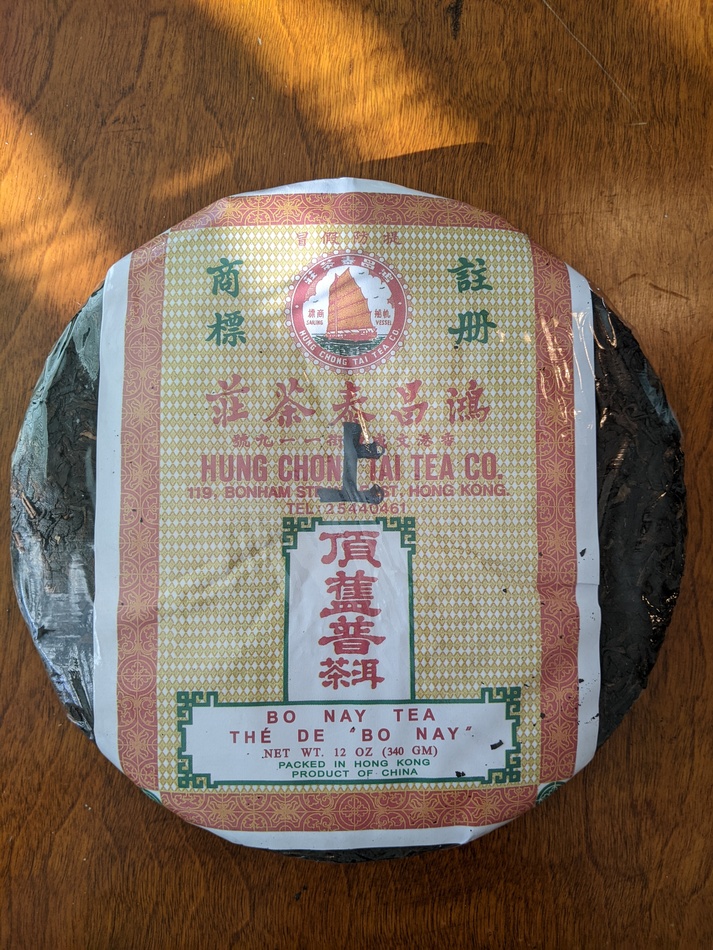 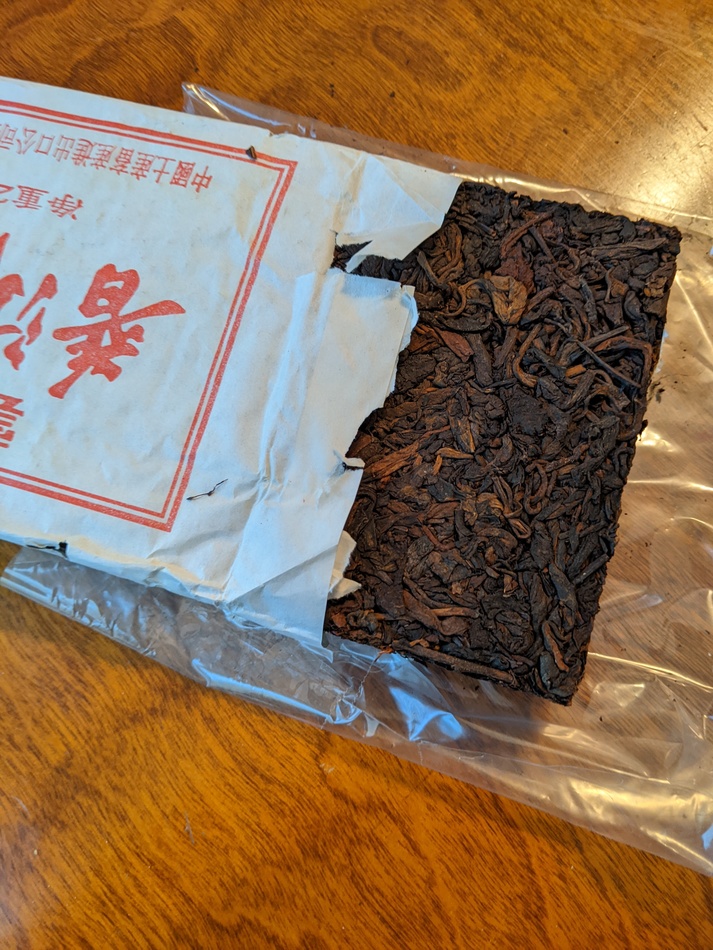 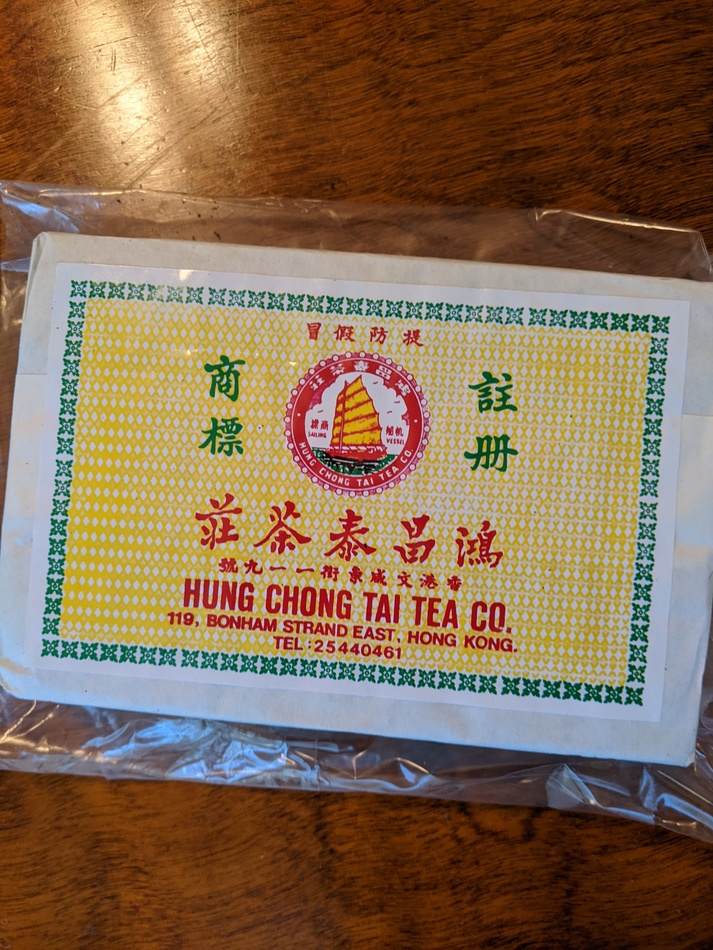 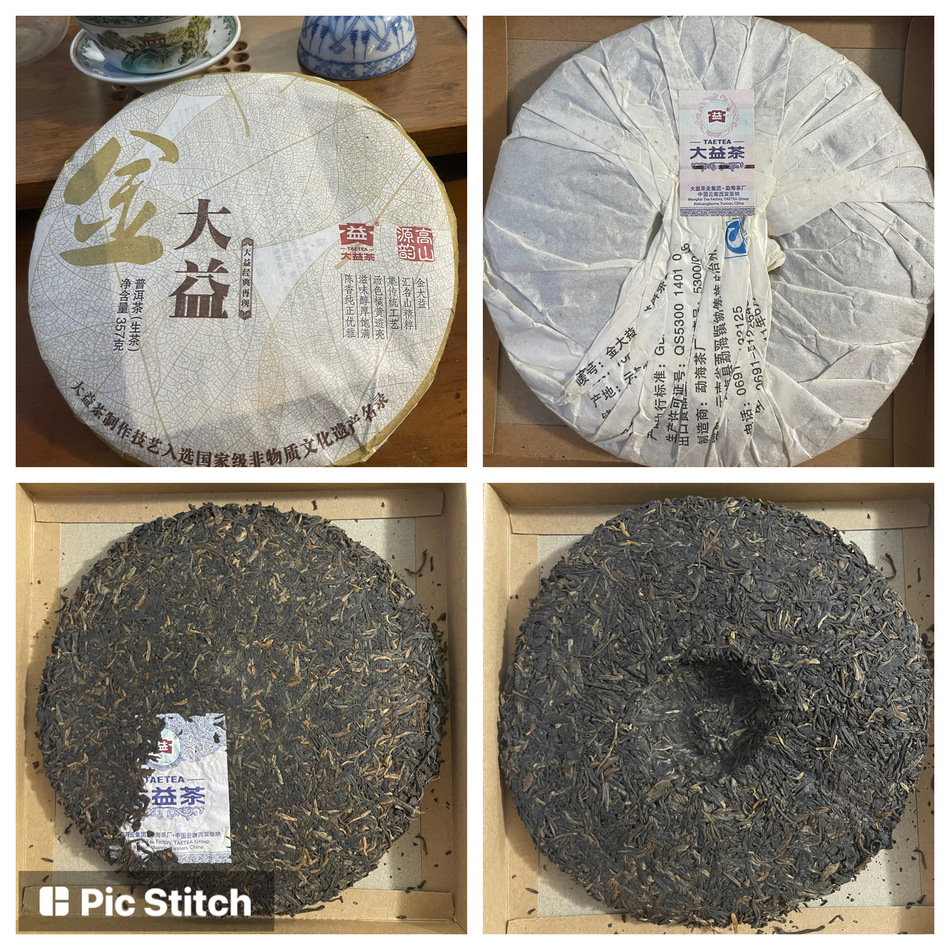 I’m drinking 2011 Garden Dayi. This is interesting tea. Seems contradictory, on the one hand, it is young, lively and fresh. On the other hand, it is thick, oily, soft and moisturising. Smells and tastes very fruity. Nothing like wet forrest and it tastes like wheat field. Still very tasty after 10 brews.
https://yinyautong.wordpress.com/2021/1 ... -2011-金大益/ 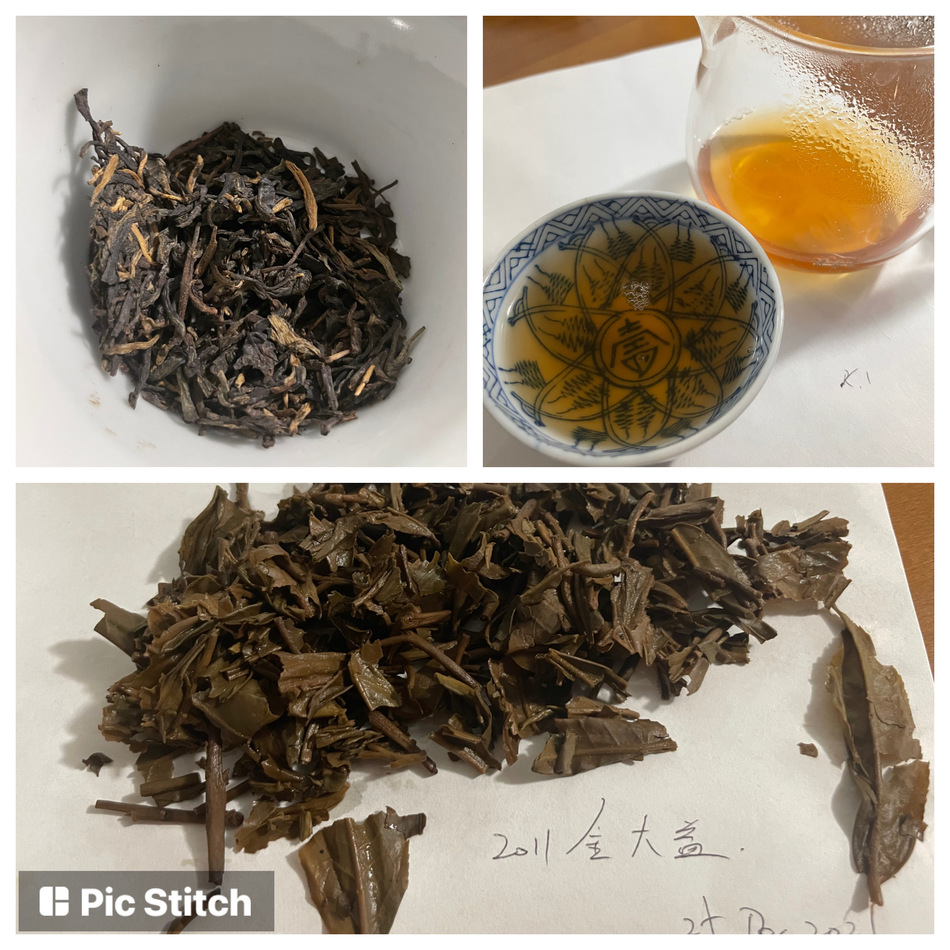 @yinyautong Wow that's fancy. I just checked at KTM it currently goes at USD 1,789 per cake

Drinking 2020 EoT Kunlu Wild. It's one of the wild teas that are distinctly not puerh but something completely different. Bitter and citrusy (mainly grapefruit) reminiscing of IPA, very juicy and tasty. Yet once the novelty of it have worn off, it became a tea that I never reach for.
Having a bit of headcold, i've decided to slow boil it with some Chenpi - not a bad combination: the boiling takes the greenness away, leaving a bitter and warming concoction with some medicinal feel to it. 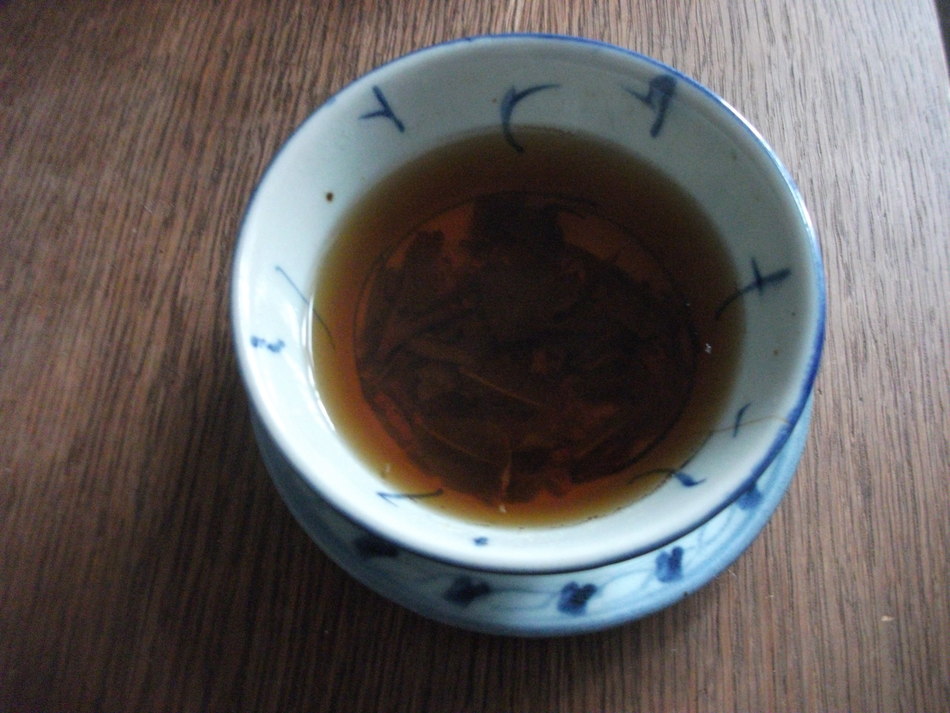 Does the Chen Pi Puerh work for the headcold ?

Yes. The price of some Dayi teas are just so expensive now. As far as I know, when the Golden Dayi was released in 2011, the retail price was only about USD 35 in Hong Kong.

However, I think as a drinker and a consumer, the market price was just a number because it was difficult to resell the tea at the so called market price.

I used myself as an example. When I decided to sell some of my tea collection including this 2011 Golden Dayi before moving to Canada in Mid 2020, I found that the "market price" of 2011 Golden Dayi in a Hong Kong dealership was about USD 1,200. However, no reasonable buyer would pay USD 1,200 for my tea if he could buy the same tea in an official channel so I posted my tea asking for USD 800 in some auctions sites. 3 months later, I eventually sold a "tung" of them each for USD 600 after negotiation.
Top

The tea is a common sight on the Taiwanese auction groups. Goes for way above what I would (and could) pay for it there too, but nowhere near that KTM price. Below is a screenshot from a listing that was posted yesterday. Two days to go and currently at TWD 10k, I expect it to end at close to the double (so USD ~700).

... the "investment effect" on the price of some of these Dayi teas is really just insane.

You’re right , there are many fake 2011 Golden Dayi on the markets as well.

I’ve seen one and took some pictures for records too. If there is no comparison, it is really hard to detect the fake one. In this case, the fineness of the printing could tell which is real and real is fake.

In the first picture, the right one is real.
The second picture shows more details. 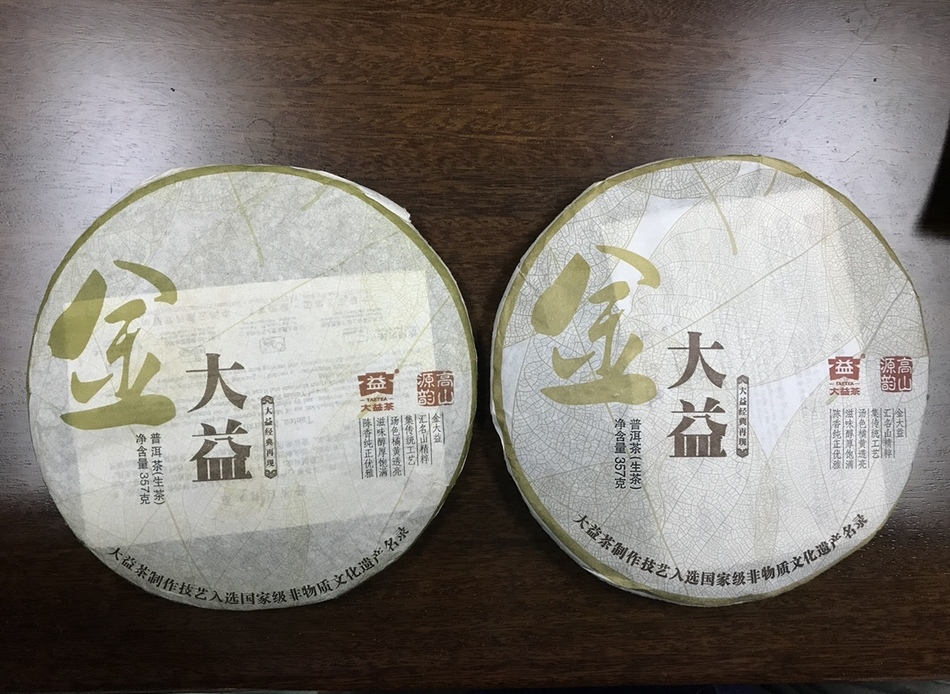 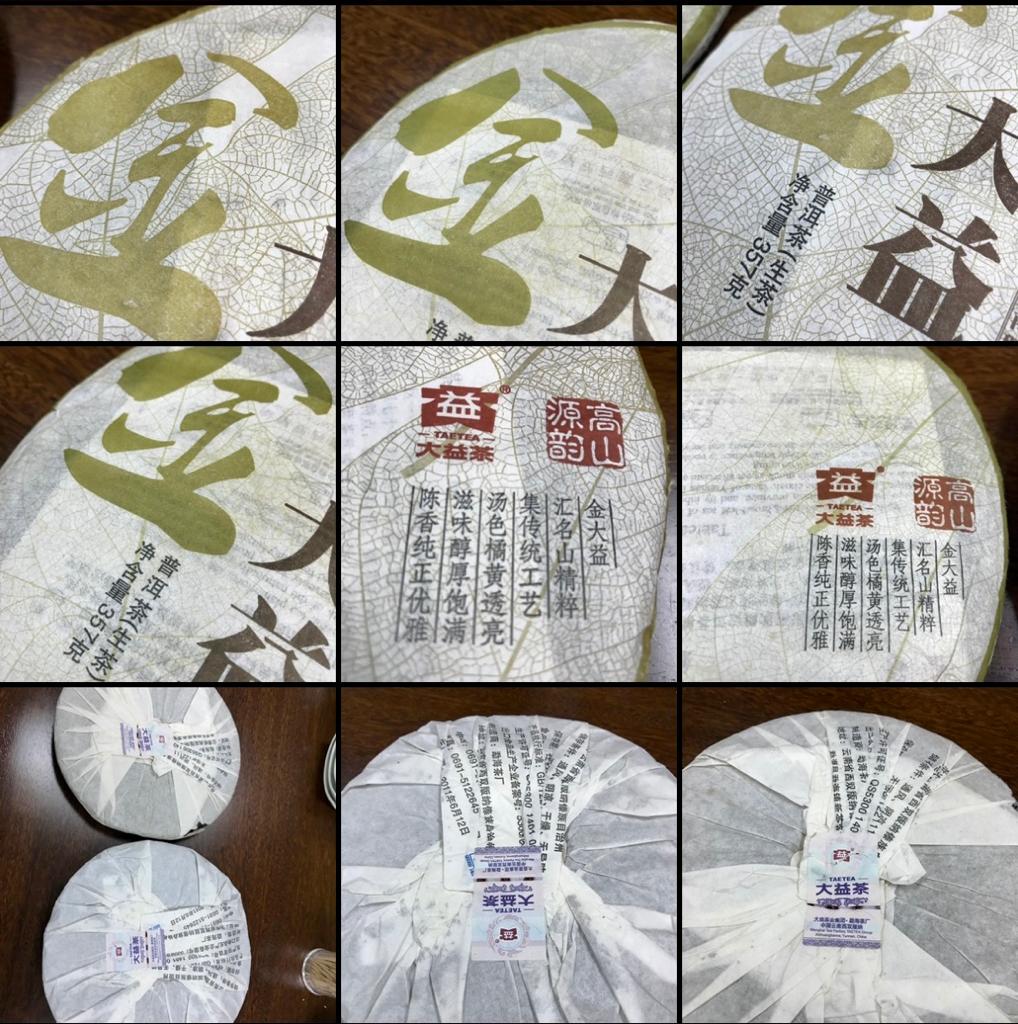 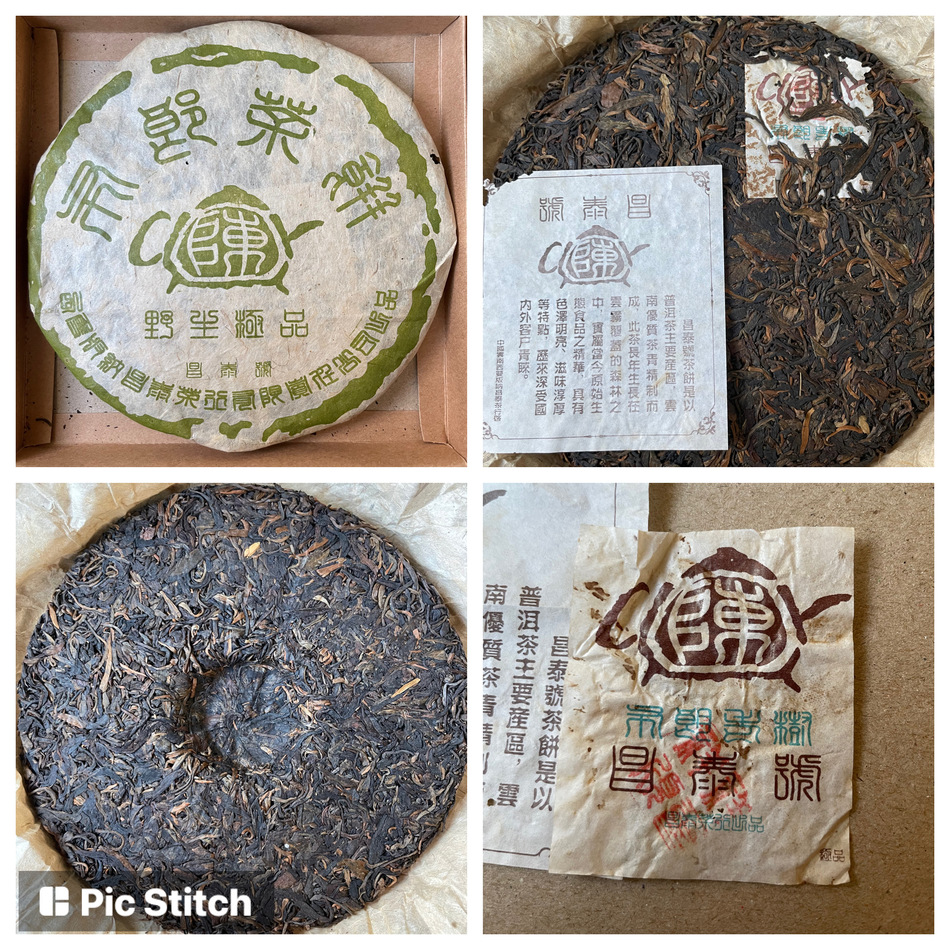 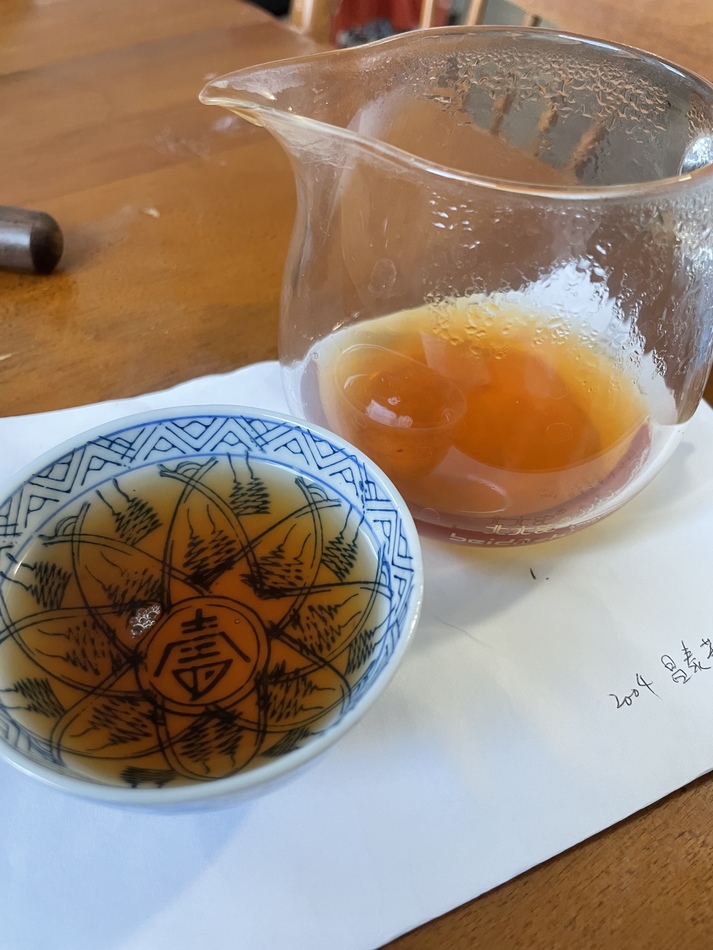 The books say it dispels cold dampness and transform phlegm, and regulates lung, spleen and stomach channels. It sounds like it would fit well with typical symptoms of common cold, but i have no actual medical knowledge, and all depends on the particular situation (e.g. not good for dry cough). In practical terms, i think excessive tea drinking keeps one hydrated, which is good, and the placebo effect of drinking something "medicinal" also helps a bit, at least mentally.
Top

the placebo effect of drinking something "medicinal" also helps a bit, at least mentally.

I understand the placebo effect, a cup of Hong Kong milk tea always works for me whenever I have headaches in the morning. 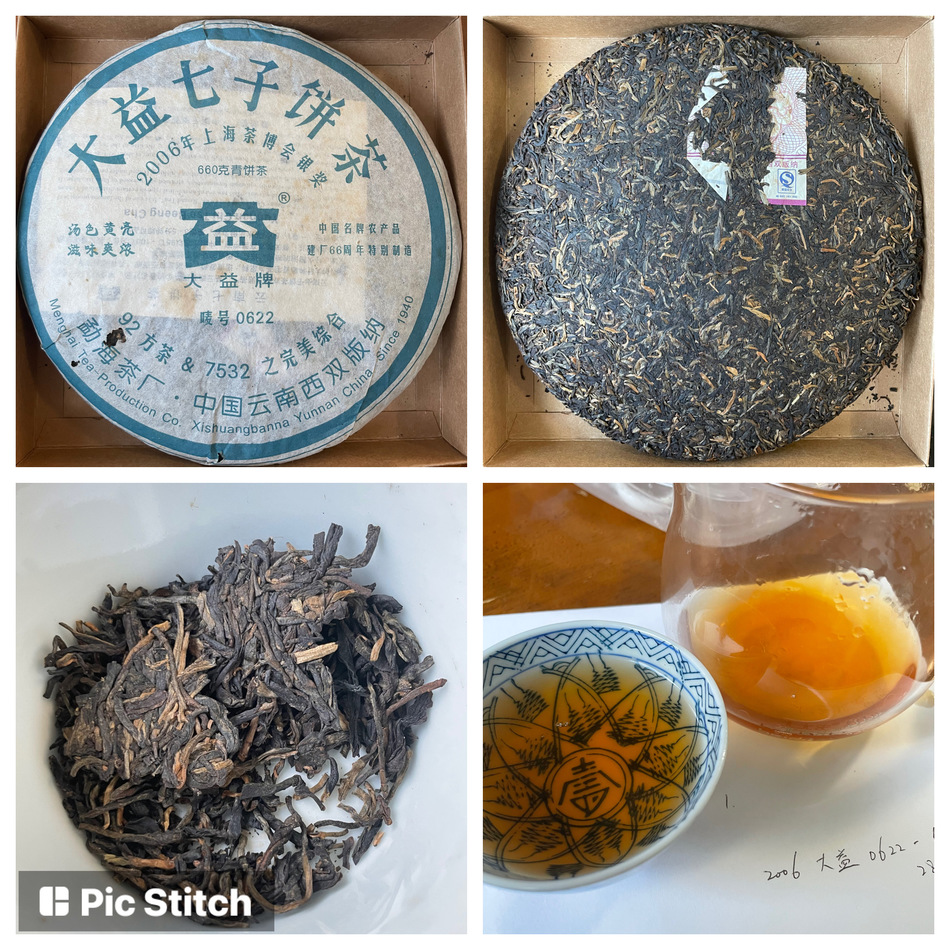 Nice picks! I bought a few cakes from HCT while I was in Hong Kong, and in my experience the owner leans towards dry storage. Some cakes were branded as "traditional", but I believe they were not from his own storage. Everything I have from him is pretty clean, nothing "dank" so to speak.

Also, what is the US vendor, if don't mind saying? I didn't know we could get HCT in North America.
Top
Post Reply
1912 posts