What HeiCha are you drinking

debunix wrote: ↑
Tue Jul 19, 2022 11:27 pm
Seeking flavor elements to describe it for thinking of another tea to compare it to?

no, rather trying to recall what type of tea it reminds me off. could be a mix between rougui and tianjian
Top

wave_code wrote: ↑
Wed Jul 20, 2022 3:43 am
Trying to fight back against the heat this morning with some HK stored Liu an. Good tea for lazy slow brewing- comes out smooth and rich even with lighter water. 20 years has given it a nice typical ginseng and wood note and mellowed it out, though it still has some energy and a pleasant bitterness early on. Gets a good sweat going without being overpowering.

slipshod it's a nice tea for sure. I have only had one or two sessions with it so far so I'm kind of still figuring it out - maybe that will be my afternoon project today. I feel like its a tea that is at an interesting transition point- its clearly getting older, but still isn't quite there yet- you can tell it is late 90s rather than early 90s tea. Given another 10 years and I feel it would be super nice and mellow and wish it could see the storage it already was in for that time, but it is also still really nice for drinking now. The price point on it though is really nice and it gives a nice chance for us with less market access to be able to taste an aging liu bao to get a sense of when/how these teas really change from middle to older tea and what happens both in terms of flavor and feel. I've certainly paid more for far lower quality material with not nearly as nice storage. 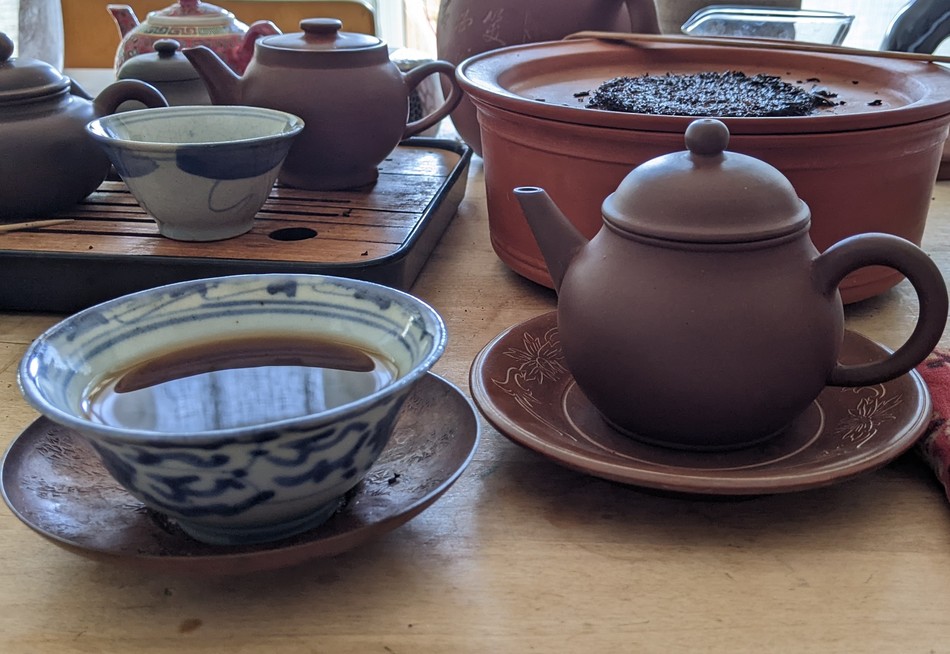 to me this is confusing. it is like my first heavily roasted oolongs with some very mild heicha. the only unusual liubao I had was 35035 from ys and I can see it was offered as part of sampler that is out of stock, I would wonder now how that one would age.
Top

Tried my first Liu Bao, 2005 Four Gold Coins Liu Bao via Essence of Tea, a few days ago. I have now sufficiently recovered to write about it

Dry smell was shocking but also intriguing (I eat weird aged cheeses and stuff, I only stop at natto beans). Soup smell in my gaiwan was off-putting and intense, so I rinsed three times. Taste was of red beets and intense musty storage, a mold bouquet that wasn't my thing at all. I've encountered beets in other heicha before (not a fan, even though I like the vegetable). I googled "liu bao beets" to check how typical it is. First result was @klepto's post on this forum, which I believe refers to the very same tea (he mentions it further up the thread)? If so, he also finds it very well balanced and sweet, however, with a relaxing energy. My mind, on the other hand, spent the rest of the day trying to forget that taste. It seems that part of the tea world is closed to me. Maybe I'll give it another try after a long while. Though I wonder how varied Liu Bao teas are, and if there is something completely different that I might like.
Top

@teatray oh no - sorry to hear you found it so unpleasant. I love that tea, and assuming it is from the same batch and storage I found that one to be quite nice. But, the profile of that tea can be really intense compared even to other liu bao since its a heavy and humid Hong Kong recipe. On the whole it may not be your thing but don't give up yet, there is variation out there! Also if you have some clay pots try it out that way too - it might help round things out for you a bit.

I actually had some 80s Malaysia stored Four Gold Coins yesterday. It still has the overall character the younger versions do, but everything is mellowed and smoothed out quite a bit- you get more underlying sweetness and more of an aromatic wood character than petrichor and wet wood. A bit of pleasant smokiness but nothing overpowering. Nice clean and clear energy but nothing that knocks you upside the head. All in all a pleasant tea and one I'm glad to finally get to try, though I think for its age and price I was a bit underwhelmed. I'll revisit it soon see if maybe it strikes me more dramatically on a different day - after a week of high heat I don't know if my senses are totally in order. If I had to pick a favorite of all the ones I have tried though the batch I had from 1999 is my favorite.

If you want to try something a little more umm... subtle try out a couple Three Cranes teas, especially ones that have some decent years on them and haven't been in humid storage, or Duoteli's non-boxed teas . They tend to be lighter on the fermentation and on the cleaner side - not a hard fast rule but I find they usually are sweeter than a lot of CNNP teas tend to be too. For either one though if you want lighter fermentation then I'd also advise trying either their brick teas or those sold on to vendors still in bigger baskets - unless its higher grade material I find tinned and small box liu bao is usually focusing on higher fermentation levels.
Top

@wave_code Thanks for the suggestions! I'm thinking of giving 3 cranes a try. Do you think Yunnan Sourcing is a good source for these? They've been hit or miss for me (mainly miss), but probably that was just me being lost and unable to select for my tastes from their extensive catalogue. Their oldest 3 cranes are 2012 & 2011. The 2012 looked promising ("The wet storage conditions in Wuzhou have fast aged this tea, but at the same time the tea is not funky or moldy.") but it's out-of-stock. The 2011 was only brought to dry storage (Kunming) in 2020, so might be funkier, but I guess that's what I can easily try (2011 Three Cranes "15010" Liu Bao Tea from Guangxi).

I have some clay pots but.... I'm afraid of putting L.B. in them right now, hahah.
Top

Their higher end liu bao can be alright, but it really isn't their specialty. and given what I can gather from your tastes you don't want stuff that spent a long time in Guangxi, or at least without considerable time elsewhere. probably not what you are after.
Top

@wave_code Thanks, much appreciated. I'll be on the lookout for some differently stored L.B. to give this tea another chance at some point.
Top

another accidental find. I started panicking a month ago about EU stocks going low and energy costs causing further disruption in September. so I placed order with dragon teahouse for t8663 to Belfast. nothing happened for a week. probably getting stock in. I chose 6 USD shipping and it took yanwen a week to delivery which is astonishing. of course, with Taiwan exports of tea on hold, lots of high end teas will go at knock down prices until mainland stocks are cleared. amazon opened warehouse in Ireland. I checked and 7452 comes from Taiwan. but to the meat of this post. I recalled Chen sheng hao opening in Canada. checked and "tea tracks" dutch company has nice selection. blog seems to be newish.
Top
Post Reply
473 posts