How much is actually known about the flavor chemistry of green tea? One of its first attractions to me was how big the differences in flavor are that result from miniscule differences in brewing inputs. Most discussions of tea chemistry I've had start out talking about oxygenation of tea leaves as they are grown and processed, and end up talking about oxygen content of brewing water. I recently discovered (on this forum) challenges to the conventional wisdom about the importance of oxygen content in brewing water by some who point out that differences in water oxygen content are negligible. So without agreement on even this how can chemisty explain a gykuro experience I recently had? While accidentally brewing some (Uji) "Yoneta" produced Goko cultivar gyokuro from Thes du Japon at about 135F- slightly higher than the recommended 122F- I got a pleasant but not spectacular umami and vegetal, flavor and aroma, but when I simply dropped water temperature to the recommended 122F, I had a jaw dropping, sinus penetrating explosion of sweetness unlike anything before. This day and night flavor difference from a difference of a mere few degrees of water temperature! Could anyone explain the biochemistry that could account for this?
Last edited by bentz98125 on Thu Feb 20, 2020 12:39 am, edited 3 times in total.
Top

bentz98125 wrote: ↑
Wed Feb 19, 2020 3:09 pm
How can there be a reliable chemical explanation of, for example, how is it that when brewing (Uji) "Yoneta" produced Goko cultivar gyokuro from Thes du Japon at slightly higher (but well within the recommended maximum temperatures of other high quality gyokuros) than the recommended 122 degrees F, I got a pleasant but not spectacular umami and vegetal, flavor and aroma, whereas reducing ever so slightly the temperature to 122 degrees yielded a jaw dropping, sinus penetrating explosion of sweetness I had never ever experienced before?

Not to add another layer on top of what you said, but I am mid-way through a bag of that exact gyokuro, and while I have experimented with infusion at the recommended temperature and a bit above, I have not noticed the phenomenon you describe. There are so many variables having to do with the leaves, the vessels, the water and the drinker that two people can have diverging, yet equally valid, perceptions of the same tea.
Top

faj wrote: ↑
Wed Feb 19, 2020 6:07 pm
Not to add another layer on top of what you said, but I am mid-way through a bag of that exact gyokuro, and while I have experimented with infusion at the recommended temperature and a bit above, I have not noticed the phenomenon you describe. There are so many variables having to do with the leaves, the vessels, the water and the drinker that two people can have diverging, yet equally valid, perceptions of the same tea.

Interesting. I can hardly wait to open another packet to try to duplicate it. I am hopeful because in a way I already have- with a sun grown sencha version of the same cultivar (Goko) also Uji, from Wazuka also sold by Thes. The same bright, nasal, floral, upper register flavor without the overwhelming explosive effect, but with more inertia all the way to the very last infusion. Apparently this sencha version of Goko is kind of unusual and was sold out last I checked. One possibility for my experience of the Goko is the Asatsuyu (Yuuki-Cha Kirishima and sometimes Kagoshima), and Asanoka (also Yuuki-Cha) cultivars that are my baseline. I find their lower register flavor notes an extreme contrast to the Goko's. Maybe that accounts for the head shot effect I got from it. But regardless of the final taste manefestation, I have to think a trained chemist would be able to identify different measureable physical properties or effects that varying water temperatures have when tea molecules are steeped in them.
Last edited by Victoria on Wed Feb 19, 2020 11:32 pm, edited 1 time in total.
Reason: Mod edit: corrected quotes
Top

I still have not tried gyokuro. I just received three packages of tea from Thes Du Japon this afternoon. On my next order, I will pick up a bag of gyokuro. While I cannot comment on the chemistry of your experience, I know that lower temperatures yield sweeter brews, and higher yield a more bitter flavor.

I've read some posts by @Victoria who seems to experiment with brewing at lower than recommended temperatures. I haven't tried going that low yet, but I have experienced a little by dropping the temperature lower than the recommended brewing guidelines.
Top

In addition to water temperature affecting the flavor profile of Japanese green teas, water type, and vessel used to steep in are also important factors. As an example, I’ve been tweaking O-cha’s Kabusecha for the past few days; first try was too light, so I increased temperature, slightly better but had bitter notes in back, so I switched from both somewhat porous Shudei clay, to more porous Shigaraki kyusu (to thicken but got bitterness instead), to then a porcelain houhin. Both Shudei and Shigaraki clays brought out bitter notes, while the porcelain houhin seems to produce vendor intended results. I increased leaf but kept temp/time as vendor recommended, so am now using 4g/130ml/168F/90sec in porcelain 150ml Kyo-ware houhin using Chrystal Gyser, Olancha, Ca water. I haven’t tried switching to a lower TDS water yet, will try that next. The overall profile is too thin and light for me though, que sera, sera.

Regarding the chemistry of flavors in Japanese teas, this synopsis seems pretty good even though it is focused on umami flavors Umami Information Center;

Umami-rich green tea
Green tea contains a significant amount of glutamate, a type of amino acid which imparts a pleasant, savoury umami taste. Anyone who has tried green tea will perhaps have sensed varying levels of sweet, umami, astringent, and bitter tastes, according to blend and variety. The sweet and umami tastes are said to result from the presence of theanine and glutamate, both types of amino acid, the astringent taste from catechin, and the bitter taste from caffeine. How is the astringency (catechine) in green tea linked to umami-rich theanine? It is known that catechin, the astringency-imparting metabolite, is formed from theanine, an amino acid imparting both the umami and sweet tastes, through a reaction with the light of the sun on tea leaves as they grow. It stands to reason, then, that large amounts of theanine are found in those varieties of green tea said to be rich in umami and sweet tastes, such as the so-called first flush tea (ichibancha), made from very young tea leaves, picked early, and premium green tea (gyokuro), made from leaves grown in the shade, and thus protected from the catechin-forming sunlight. It is of note that the chemical composition of theanine is extremely similar to that of glutamate.

Strength of umami differs from tea to tea
Of the different types of green tea shown in the graph, the superior variety of premium green tea (gyokuro) contains the highest levels of both theanine and glutamate, with 2.5g (2500mg) of theanine and 0.45g (450mg) of glutamate for every 100g. Equally, roasted tea made from the leaves of mature tea bushes (hojicha), was shown to contain only 0.02g (22mg) of theanine and 0.02g (17mg) of glutamate for every 100g. This amounts to a gap of around 100 times for theanine, and of around 25 times for glutamate, indicating that whilst the premium green tea is rich in umami, the roasted tea is not. Indeed, Japanese people are skilled at selecting the right tea for every occasion, according to custom and tradition. This means that whilst premium green tea (gyokuro) and green tea (sencha) are chosen to accompany traditional sweets, it is the roasted tea that will be reached for when a refreshing after-dinner drink is called for. 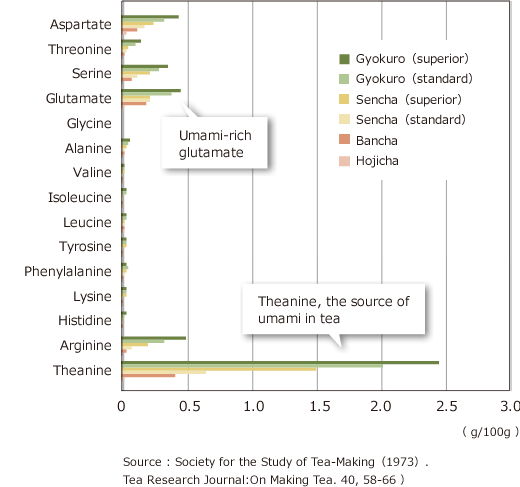 Dunno why I’ve been neglecting porcelain with my Japanese greens... Made a note to do so on Ocha’s kabusecha during the upcoming shincha season!
Top

Victoria wrote: ↑
Thu Feb 20, 2020 9:22 pm
The sweet and umami tastes are said to result from the presence of theanine and glutamate, both types of amino acid, the astringent taste from catechin, and the bitter taste from caffeine.

I remember you recently commented on the choice of word between astringency and bitterness. The above source links each to different molecules.

The following source (I only read the abstract) says catechin was shown by tests to be the main driver of both astringency and bitterness.

In both cases, astringency and bitterness are considered different perceptions. If catechin is the main contributor for both, though, it might turn out that using one word, the other, or both, might refer to roughly the same thing from the tea drinker's point of view.
Top

Wow, thanks for the most comprehensive and concise explanation of green tea flavor I've seen! I feel my understanding has progressed just by looking at it. Always knew a lot of variables were involved but never seen them organized into such a nice logical format. I'm sure an intricate web of correlation and causation required a ton of research to produce it. My original question stems from repeated amazement at the importance specifically of water temperature differences in teas that for all appearances are otherwise similar. The optimal temperature for black or oolong tea being different from green tea or even between sencha and gyokuro isn't suprising because they are just different animals. But when modest differences in optimal temperature between two senchas or two gyokuros from the same region grown in similar circumstances have dramatically different results, I just have a hard time believing the explanation lies in the structure of this or that amino acid rather than some secret magical hoodoo alchemy!
Top
Post Reply
8 posts • Page 1 of 1