What Green Are You Drinking

Today, I've reopened a package of mystery tea that was a gift from my Tokyo-based friend who picked it up along with several others at a Tea-tasting & sales event. IIRC, this event was meant to introduce consumers to small tea producers, so the teas are not just the standard sencha and gyokuro and bancha. This one is small twisty curly leaves & fragments, and tastes a bit like biluochun, much more like that then sencha. The liquor is yellow, sweet, and mellowly vegetal, without a bit of bitterness. Very nice.
Top

@debunix, Was that sencha a pan fried Guricha, aka Tamaryokucha. It has curled, comma shaped shaped leaf. I had O-Cha’s Nagasaki Organic Guricha.

Drinking Yunnan Chun Jian from Hojo. I’m not very experienced with green tea, but this is quite possibly the best tea I’ve ever had period. It’s really complex. This post is gonna be a novel cause there was so much going on. I steeped it at 160F in a porcelain gaiwan starting with 5 second steeps and going up very slowly from there (for example eighth infusion only twenty seconds).

The first steep was fairly savory, very smooth. Second steep is when things started to get interesting. I got canned green beans, bacon, and the flavor of heavy cream, the body got bigger, and the aftertaste really increased, very penetrating. Coats my mouth. Third steep was more of the same.

Fourth through ninth I did two infusions and put both in the same cup and drank them together (fourth and fifth together and so on). Also all steeps after this point the mouthfeel had the same sensation that heavy cream gives when drunk (I’m not sure what that’s called), that penetrating spreading mouth coating feel. This continues all the way to the very end, peaking at the fourth/fifth and slowly declining after.

Fourth & fifth brought out the fresh corn flavor Hojo describes, no bacon or green beans. Anyone gone out to the garden, picked an ear of corn, and eaten it right there? That’s what it tastes like. Kinda sweet, kinda creamy, And of course corn. The body of the tea is starting to drop off at this point as the aftertaste increases. Sixth & seventh infusions more of same. Eighth & ninth more of same but with slight hints of something green and vegetal added in (not sure what it is, maybe Romain lettuce?) flavor starting to get lighter.

The tenth infusion I steeped for 10 seconds at 200F. The fresh corn is gone, and the possibly maybe could be lettuce is there but very light.

Eleventh for 25 seconds at 200F, the corn is back, this time boiled and buttered tasting. The canned green beans are also back, lurking in the background. I can’t taste the green vegetal something.

Thirteenth 20 seconds at boiling the maybe possibly lettuce is back and the beans are gone. Flavor very light, will increase steep time next infusion.

Fourteenth 1 minute at boiling and the beans are back, slight hints of the fresh corn again.

Fifteenth 2 min at boiling. The maybe possibly lettuce is definitely lettuce. But not fresh lettuce. Lettuce that’s been in the fridge for a week and slightly wilted. The dark green ends of the Romain leaves.

At no point did the tea ever taste bitter or astringent. I love this tea. I’m gonna stock up next time I order from Hojo, cause wow. Just wow. And the best part? This is the cheapest Chinese green Hojo sells!
Top

Swordofmytriumph, that pan fried Yunnan green sounds pretty wild. I’ve not had a green tea that has as many different tasting notes as you’ve described, and never bacon. It’s possible you have a very sensitive palate and are able to discern different flavor profiles more acutely. Curious why into the 10th/11/12/13th steeps you help back on length of steep to just 10sec/25/30/20seconds? By that time I’m usually into whole day extended steeps.

These past few weeks I’ve been enjoying O-Cha’s Satsuma Sae Midori. It is also brothy, with notes of sweet umami, and sweet peas, when steeped with cooler temps. It’s been uncharacteristically humid and rainy here in Southern California. The increased humidity, and possibly some changes in my water supply, is affecting how this lightly steamed green is steeping. One day it’s thick and sweet, another thinner with slight bitter notes coming through, even though I’m using same gr/ml/f/time and same kyusu. This morning it steeped perfectly brothy sweet.
Top

Honestly, I’ve never had a tea with so many tasting notes either, or so dynamic. Even the fact that flavors would go away completely and then show up again several steeps later was new, hence the “best tea I’ve ever had” label.

honestly, this tea is the one all future teas will be measured against, it was just that good.

I held back the steep lengths because I was raising the temperature, basically I dialed it back each time I raised it. The first several were at 160. So jumping from that to 200 was a big leap. I didn’t want to cook it. It was still fairly flavorful by the tenth, though I should have done longer than ten seconds that time (I fixed that in the eleventh). I actually probably could’ve got more steeps from it but I decided to try boiling the leaves. I did that for two minutes and the results were less than satisfactory. I’m thinking maybe because I was upping the temp throughout the session that might be one reason why it was so dynamic? Flavors coming out at different temps? Food for thought.

As for the bacon, didn’t last long. It was less of a fried bacon flavor than...well, once my dad experimented with a soup with bacon and canned green beans and diced tomatoes? It tasted just like that minus the tomato (only the first few steeps though). It instantly brought back the memory of that soup. The bacon and beans mixed. I also had a Bi Luo Chun from YS recently that also had slight bacon hints to it (lol I bought it in the first place cause a reviewer said it tasted like bacon, so I had to try it. It did. I was very happy).

I suppose I could have a sensitive palate, I dunno. I haven’t really been doing this tasting thing longer than a month or so (since I joined the forum). You know, consciously looking for flavors in the tea. Before it was either I liked it or I didn’t. But my family can’t taste any of the things that I can taste either (they nod indulgently while I gush about peaches and green beans and bacon). They also don’t understand why I would be willing to spend so much on teaware when they can’t taste the difference.

I have never thought about the way the weather affects a session. Does it really have that big an impact?

Also, whole day steeps? Doesn’t the tea get cold and bitter? Or for a green tea, start to taste funny?
Top

Ah yes, I had this tea from Hojo. I'm not much for describing all the things I taste but it was a very enjoyable tea. Will definitely look for another bag this year.
Top

A typical steep sequence for me with a green tea might go....
180°F 5-10 seconds ('waking the leaves')
170° 1 minute (1st infusion proper)
170° 30 seconds (shorter because the leaves are well awake and hydrated now)
180° 1 minute
190° 2 minutes
200° 3-4 minutes
Then top with cooler water and let leaves sit in that overnight, or through the whole day at work. If the leaves have given up a lot of their flavor, that long cool infusion shouldn't be bitter; if it is a little too strong, some dilution may correct it. I may use room temp water if I'm worried about bitterness, or full boiling water if the leaves are mostly used up but I think there is something still to be extracted.
Top

debunix wrote: ↑
Sun Jan 20, 2019 12:24 am
I may use room temp water if I'm worried about bitterness, or full boiling water if the leaves are mostly used up but I think there is something still to be extracted.

I hadn't thought about using cold water before for some reason, I'll have to try that.
Top

I'm very inexperienced with greens but I'd read that except for some tea types like puerh, most teas can be steeped only about 5 to 8 times for gongfu brewing. Typically closer to 5 for green, so 17 steeps does sound excessive.
Top

Psyck wrote: ↑
Sun Jan 20, 2019 4:18 am
I'm very inexperienced with greens but I'd read that except for some tea types like puerh, most teas can be steeped only about 5 to 8 times for gongfu brewing. Typically closer to 5 for green, so 17 steeps does sound excessive.

I'm pretty inexperienced with greens as well, but yeah, 5 steeps is all I've ever gotten from the teas that I have tried, until this one. I mean, I've had greens where there was still plenty of flavor past that, but by then the brew is so bitter/astringent that it's unpleasant for me to drink. I've never heard of a green tea going this long, let alone actually tasting good. Sure, the flavor got a lot lighter towards the end, but I could still taste it.I was still really enjoying it, even at the end, so I just kept going until I wasn't enjoying it anymore. Part of that was that way the tea felt in my mouth was still hugely enjoyable, so even though the flavor was lighter towards the end, it felt like I was getting more flavor than I was. It didn't feel watery, if that makes any sense.
Top

For me, how many steeps depends on the tea, the tea/water ratio, how much time I have, and whether need for more fluid or more caffeine or just have to rush out the door. I've done a dozen steeps on occasion with green tea but usually that's because I didn't realize how much the tea would fill the vessel when it was fully hydrated. Sometimes those last 'sweetwater' steeps are just right for my mood and the setting.
Top

debunix wrote: ↑
Sun Jan 20, 2019 10:24 pm
For me, how many steeps depends on the tea, the tea/water ratio, how much time I have, and whether need for more fluid or more caffeine or just have to rush out the door. I've done a dozen steeps on occasion with green tea but usually that's because I didn't realize how much the tea would fill the vessel when it was fully hydrated. Sometimes those last 'sweetwater' steeps are just right for my mood and the setting.

Often I find that the perfect tea session is like a good workout.

You start by warming up (the vessels).
Then you open up your muscles and hips (and leaves). Nice and soft.
Then you kick things into a higher gear.
You push the limits.
You enjoy the (runner's) high.
And finally you cool down a bit with something light (and sweet).
Of course you're drinking throughout, but it helps to end the session with some nice water.
Top

Having Sae Midori sencha from Chotaro Horii, the owner of the Okunoyama tea field, the last of the 7 famous fields of Uji surviving since the Muromachi period. 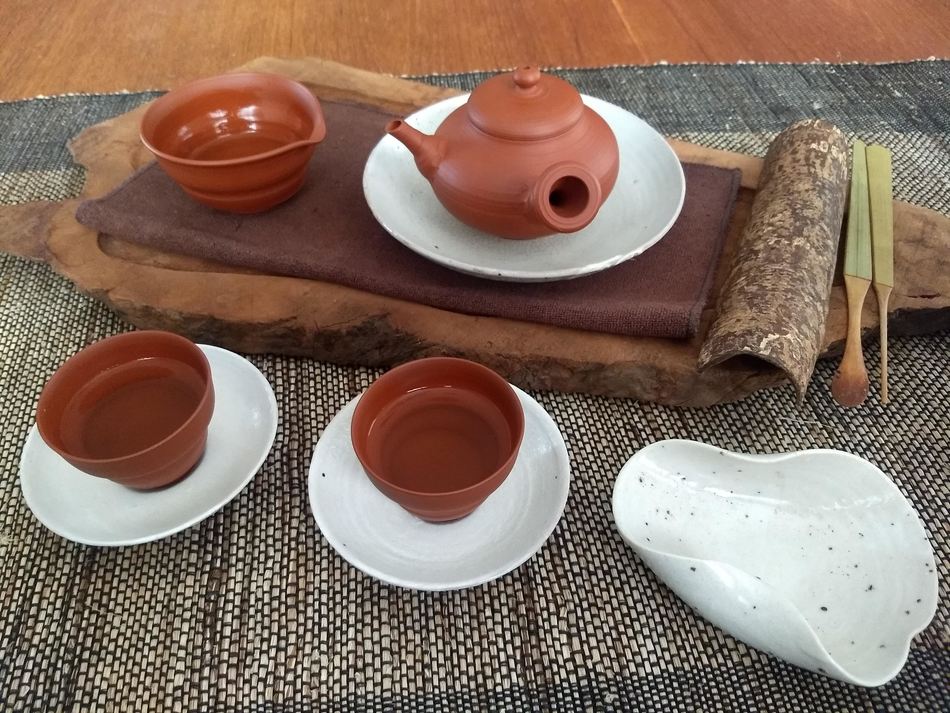 @steanze, have you used or owned pots by jozan iv or his son, sou?
what do you think of the spout of your jozan iii pot(s) from a functional standpoint compared to to those of his son's/grandson's? will the jozan iii dribble either in normal use or by trying to force it?
Top

highly recommended, one of my favorite senchas of 2018
Top
Post Reply
938 posts